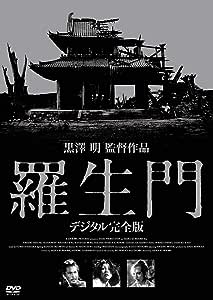 Gazza
5つ星のうち5.0 Rashomon
2018年11月15日に英国でレビュー済み
Amazonで購入
One of the best movies I’ve ever seen. When I first saw it, sitting there reading the subtitles, I thought it would be too taxing and simply boring. But you quickly get into this classic of Japanese cinema as we watch different versions of a story laid out before us, each one seemingly as true as the other.

I hope you find my review helpful
続きを読む

5つ星のうち5.0 Rashomon
2018年11月15日に英国でレビュー済み
One of the best movies I’ve ever seen. When I first saw it, sitting there reading the subtitles, I thought it would be too taxing and simply boring. But you quickly get into this classic of Japanese cinema as we watch different versions of a story laid out before us, each one seemingly as true as the other.

I hope you find my review helpful

Mr. R. W. Graham
5つ星のうち5.0 Different Points Of View
2020年10月12日に英国でレビュー済み
Amazonで購入
4 witnesses describe different versions of events in the ambush and rape of a woman and the murder of her husband. Akira Kurosawa's classic beautifully restored here has been spoofed, parodied and copied many times over the years but this is the original masterpiece. An excellent intelligent crime drama with an excellent Japanese cast and absolutely riveting that introduced the world to Japanese cinema.
続きを読む
2人のお客様がこれが役に立ったと考えています
違反を報告
レビュー を日本語に翻訳する

Keith M
5つ星のうち5.0 Innovative, Perceptive And Profound
2013年12月6日に英国でレビュー済み
Amazonで購入
Although particularly notable as being the Kurosawa film that broke the Japanese director in the 'west', and (rightly) cited as a ground-breaking piece of cinema, 1950's Rashomon is a film (I have found) whose qualities gradually 'crept up on me'. Of course, its sensorial appeal is pretty much immediate, with its (for its time) innovative three-point flashback narrative, Kazuo Miyagawa's stunning cinematography (in particular the depiction of light through forests and clouds) and Fumio Hayasaka's mesmerising soundtrack tracking Rashomon's storyline almost to the second. However, its thematic and symbolic significance is more subtle (not to say deliberately opaque), as Kurosawa's film searches for 'the truth' in humanity (whilst along the way touching on elements of fate, chance, memory, honour, jealousy and love (or perhaps lust)).

In one of the most stunning openings in cinema (Kurosawa's influence on Leone seems obvious here), as rain and wind lashes down on the dilapidated Kyoto city gate (a 'hell on earth'), the great Takashi Shimura's woodcutter and Minoru Chiaki's priest stare into nowhere, the woodcutter sighing, 'I don't understand. I just don't understand' (a metaphor for much audience reaction, no doubt!). What follows are (at least) three versions of the truth as Masayuki Mori's travelling samurai and wife (Machiko Kyo) encounter 'notorious' bandit Toshiro Mifune's Tajamuro, leaving the samurai dead. Is it a simple case of 'bandit rape and murder' or is there a 'ritual murder' or even suicide involved? Kurosawa leaves it for us to decide, as the three (the deceased samurai via a medium, no less) give their accounts of events (in court) straight to camera. Throughout, in order to emphasise the 'differing POV' theme, Miyagawa's camera constantly (and cleverly) shifts between 'over the shoulder' shots from each of the three protagonists.

Acting-wise, given the film's cultural milieu these are stylised performances, owing much to the preceding silent film era. Mifune presages his Seven Samurai turn as Kikuchiyo, here as animated (hysterical even) bandit, in a performance of great infectiousness - a dreamer and liar who lives on base instinct certainly, more a petty criminal than cruel murderer, however. Kyo is equally impressive (insecure, desperate, fearful) as the dishonoured wife - either a brazen hussy or a devoted, compromised spouse (depending on your POV), whilst Mori is also good as the stoic cuckold. Shimura is (of course) superb as the priest's co-starer in a (relatively) peripheral role (albeit he is key to the film's denouement).

By the film's conclusion, at which woodcutter and priest achieve some degree of 'redemption', we are left with the strong suspicion that Kurosawa's (almost mythological) characters are mere ciphers for the failings of humanity, moulding the truth to suit their own (nefarious) purposes (base desire, social honour, reputation, etc). Whilst (for me) Rashomon does not quite convey the feel for humanity of Ikiru or the character development (or, of course, pyrotechnics) of Seven Samurai, it makes up for this via its subtle perception, evocative symbolism and technical innovation. And just to reiterate, it is a film (for me at least) whose power (and reputation) grows with each repeat viewing.
続きを読む
8人のお客様がこれが役に立ったと考えています
違反を報告
レビュー を日本語に翻訳する

Malarchy
5つ星のうち4.0 Thought Provoking Classic
2013年4月9日に英国でレビュー済み
Amazonで購入
Rashomon is a groundbreaking 1950 film by the legendary Akira Kurosawa and starring the peerless Toshiro Mifune relatively early in his career. It is largely based on the short story In a Grove by Ryunosuke Akutagawa. What makes Rashomon so innovative is the explicit and repeated use of the unreliable narrator concept. The plot features the telling of the same story from four different perspectives, each perspective imposing the storyteller's own personality and prejudices onto the action.

As Rashomon is a Kurosawa film, it is expertly directed. The pacing of the film is superb. Rashomon has quite limited periods of action but there is seemingly no let-up in the atmosphere. As a black and white film with subtitles for those without sufficient Japanese, it has a somewhat arty feel to it. Rashomon is thought provoking rather than exciting.

Rashomon stars Toshiro Mifune and he is absolutely excellent. He is clearly the class act on screen, able to move his performance with great subtlety to express the different views the story is told from. At times he is the brash and super confident bandit Tajomaru. From the perspectives that see the dangerous bandit as the belligerant, Mifune is imposing and strong, his facial expressions convey his dominance of the environment he inhabits. From other perspectives, Mifune is afflicted by nerves, the very same outcomes happen almost despite Tajomaru rather than because of him.

It is that distinction of perspective that makes Rashomon so cherished. Intriguingly each of the characters plays up their own negative role in the action rather than portraying themselves as heroic. Tajomaru sees himself as a brutal killer when others see him more comedic or even a victim of circumstances. The relationship between the couple in the woods is entirely dependent on the perspective being told from. From Machiko's perspective she is wronged by her partner seeing dishonour in her. From Mayusaki's perspective he is scorned by the woman he loves.

None of the narratives are reliable. There is no real way for the viewer to decide which perspective is true. It is a fascinating study to watch, to be exposed so bluntly to egoistic way each of us understands the actions of others.

Often great film is enhanced by tremendous music. This is not true of Rashomon. Fumio Hayasaka's score is not excellent. The sligtly disjointed tones of the majority of the film are somewhat ruined by an inappropriate use of Ravel's Bolero. Bolero really does not fit Rashomon, it was a bad choice by Kurosawa to insist on it.

There are other aspects of the experience though that are tremendous, in particular the lighting. The oppressive rain experienced by the three characters at the Kyoto city gate is beautifully lit. The various woodland scenes also work very well with incredible use of sunlight.

What makes Rashomon something special is the unreliability of each of the narrators. It is the subjectivity of perception explored so ruthlessly that makes it so intriguing. None of the narrators is willfully unreliable, the tale each tells seems genuinely theirs. These are not narrators manipulating the viewer deliberately and that makes them far more engaging.

The scope and feel of Rashomon does not itself necessarily suit film brilliantly. Kurosawa makes it work thanks to his own genious and the presence of Mifune. They turn a concept into something compelling. Still, Rashomon seems more suited to being a stage performance, it just does not have the scope of Kurosawa's greatest films, tales like  Seven Samurai , Yojimbo , or  Hidden Fortress . Rashomon is not an epic, it is a thought provoking piece that sets and then exceeds expectations.

The DVD Extras are ok. The Extras mainly offers a discussion among several of those who worked on the 1950 film. It is a somewhat technical discussion about how certain effects were created. The special edition includes a booklet with a terrific extract from  The Emperor and the Wolf  by Stuart Galbraith as well as text from the novellas Rashomon and In A Grove. Galbraith's history of the film and his own analysis are high quality and offers a fascinating 20 page insight.

Rashomon is a very good film, not the greatest of Kurosawa's unequalled career but still fascinating. The concept is thought provoking and can sit with a viewer for a long time afterwards. The unreliable narrator has a very long tradition but to see that unreliability come about through subjective egoism rather than as a deliberate act is a terrific concept.
続きを読む
6人のお客様がこれが役に立ったと考えています
違反を報告
レビュー を日本語に翻訳する

Beetleypete
5つ星のうち5.0 Forget the gripes.
2013年4月25日に英国でレビュー済み
Amazonで購入
There are lots of reviews here from viewers who obviously expected to see a modern style sword-fest along the lines of Hero. Others complain that the story setup has been seen many times in modern films. This is the original though, and surely must be given credit for that?

From the huge catalogue of Mr. Kurosawa. This is an earlier work, from 1950, and was awarded an Oscar two years later. Filmed in black and white, and starring Kurosawa's frequent collaborator, Toshiro Mifune, this is set in the 11th Century, at a time of both plague, and Civil War. Today, the story seems simple, dealing with a rape and murder, and three alternative views of the event, seen in flashback, as told by different characters.

At the time of this film's release, such a plot construction was unknown, and it received immense critical acclaim. Most stories of this nature filmed since, certainly owe their origins to this startling original. With twists and turns, tension, action, and brilliant direction at all times, this film is rightly considered for inclusion in the `Masters of Cinema' DVD series.
続きを読む
2人のお客様がこれが役に立ったと考えています
違反を報告
レビュー を日本語に翻訳する
すべてのレビューを参照します
Amazonプライム会員ならお急ぎ便、日時指定便が使い放題
さらに、映画もTV番組も見放題。200万曲が聴き放題 。クラウドに好きなだけ写真も保存可能。
> プライムを無料で試す