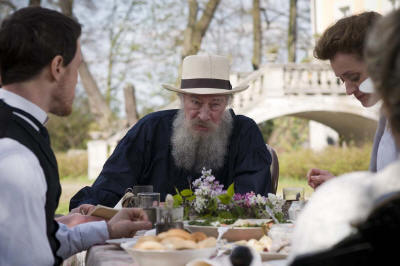 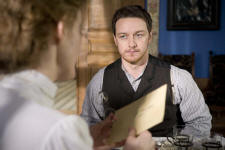 S.M. Johnson
5つ星のうち5.0 Beautiful
2020年7月16日に英国でレビュー済み
Amazonで購入
I am not a lover of costume drama. I don't by it very often and when I do it is for another reason other than it is a costume drama. This film is very atmospheric. It is a big film because the ideas are big. The wonderful Helen Mirren playing a rather forceful woman, Christopher Plummer an enigmatic Tolstoy, the whole piece a quite wonderful drama beautifully acted lit and photographed and the music is magic. There isn't anything more to say really.
続きを読む
3人のお客様がこれが役に立ったと考えています
違反を報告
レビュー を日本語に翻訳する

Bluebird
5つ星のうち1.0 A VERY LIGHTWEIGHT FILM FOR AUTHOR TOLSTOY!
2021年4月20日に英国でレビュー済み
Amazonで購入
I enjoy reading Russian literature and Tolstoy is a favourite author, this film depicts the end of Tolstoy's
life and concentrates on the relationship between him and his wife Sofia played by Helen Mirren. The
film is very lightweight has no depth and the best part for me was at the end where the credits showed original footage of Tolstoy and his wife for a few minutes I would definitely not recommend this film, a very
disappointing purchase.

Valerie J.
5つ星のうち4.0 Helen Mirren and Christopher Plummer - pure magic
2014年3月20日に英国でレビュー済み
Amazonで購入
It's Russia, 1910, and Count Lev Nikolayevich Tolstoy (Christopher Plummer) is the most revered author of his day having written War and Peace, and Anna Karenina. He happily shuns material things and is contemplating leaving his works to the Russian people. His wife, Sofya (Helen Mirren), understandably doesn't see eye to eye with her husband's philanthropic views, worrying that her family will be left impoverished, and she voices her concerns quite openly. No matter what his wife's views are, Tolstoy has an active following in the Tolstoyans who live their lives according to what they believe to be Leo Tolstoy's principles. One leading Tolstoyan, Chertkov (Paul Giamatti), who edited Tolstoy's work, recruits a young man, Valentin Fyodorovich Bulgakov (James McAvoy), to be Tolstoy's personal secretary and requests that he make a note of everything the Countess says and does. Chertkov aims to prevent Sofya influencing Tolstoy with regard to his last Will and Testament, and Bulgakov is unhappily trapped in a difficult situation of caring for both the Count and Countess.

The Last Station (2009) is an engaging gem of a movie with a cast of actors who are just perfect in their roles. We can never know (unless we were a fly on the wall at the time) what was actually said between the various real life characters but the script of this movie is written in such a way that it's hard to doubt anything that was said or done. It's believable.

Christopher Plummer is just marvellous as Tolstoy who, in his last year (in the movie) is pulled in two directions by Chertkov and Sofya. Plummer almost outshines Helen Mirren, which is no easy feat. She literally threw herself into the role of the desperate diva dreading the death of Tolstoy if he changed his Will. It was cringeworthy watching Sofya keep harping on to Tolstoy about the Will and his inevitable, impending death.

James McAvoy looked ingenuous (doesn't he always?) enough to play the rather naïve secretary whose attempt at being celibate didn't exactly live up to his raging hormones and passion for Masha (Kerry Condon).

All in all it's a good 112 minute drama and worth checking out if only to watch Mirren's absurd theatricals as the Countess. I mean, we have a Countess clucking like a hen and Tolstoy crowing like a cock. It's all too much. :)

As for the Blu-ray, it was all you can expect from a Blu-ray, visual and audio (5.1 DTS HD Master Audio), but it bugged me no end that I wasn't allowed (by the disk) to pause during the trailers, and that there was an advert for Malteasers. Do we want to pay a fortune for DVDs and Blu-rays so that the movie makers can make more money from advertisers? No. The extras on the Blu-ray are an Interview with Director Michael Hoffman; and Conversations on 'The Last Station', which I confess I have not watched.

Mrs. Carole Buttle
5つ星のうち3.0 Helen Mirron was great. It surprised me
2014年8月18日に英国でレビュー済み
Amazonで購入
Bit dark. Helen Mirron was great. It surprised me. It was nothing like the title . The lead part was magic. I don't want to give too much away, and do not want to deride it too much, as it could be a film a lot of people do enjoy, it just wasn't for me, I don't like things which are dark and moody and hard to follow the plot. That's just the way I am, but I would still recommend it to anyone who loves seeing Helen Mirren in a film, and who enjoys Russian deep dark moody films. I will not say who it was about, as this could spoil it for the people who want to see it, but it is a real eye opener on one of the most famous writers the world has ever known.
続きを読む
1人のお客様がこれが役に立ったと考えています
違反を報告
レビュー を日本語に翻訳する

Joy
5つ星のうち5.0 The Last Station
2012年10月20日に英国でレビュー済み
Amazonで購入
This is a moving and brilliantly acted film. There is never a dull moment so your emotions and interest are given a good workout. The cast give fabulous performances but for me it was Helen Mirren who was particularly captivating and I really felt for her character. My heart-strings were pulled a few times and I did shed a tear or two at the end. I don't know how historically correct the film is but from an entertainment point of view I would highly recommend it just for the amazing acting and wonderful story.
続きを読む
違反を報告
レビュー を日本語に翻訳する
すべてのレビューを参照します
トップへ戻る
Amazonについて
Amazonでビジネス
Amazonでのお支払い
ヘルプ＆ガイド
日本語ショッピングのための言語を選択します。 日本ショッピングのための国/地域を選択します。
© 1996-2020, Amazon.com, Inc. or its affiliates