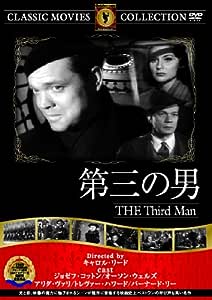 spotty
5つ星のうち5.0 Don't miss this great cinema!
2016年8月17日に英国でレビュー済み
Amazonで購入
There are probably many, including myself, who have not had the pleasure of seeing this film before. I know that some of the younger generation eschew monochrome films and in so doing, deny themselves access to some of the greatest film made during the last century. The Graham Greene story is pretty lightweight but it's realisation makes it, for me, one of the great cinematic experiences of my picture-going life. I'm not a lover of Joseph Cotton, the leading man, but the leading lady is an actress of considerable talent and Orson Wells, in the title but fairly small role, gives a touch of star light to the film.

There are splendid touches - notably, for me, the parts played by a small boy and a tiny kitten but It is the photography and the lighting, and the wonderful scenery of post-war Vienna which define the film's - and the director's genius. (I don't know how they managed to shoot so many scenes in completely deserted streets!)

If you are young, take a chance and you will not regret it. If you are old, like me, you will delight in the visual and atmospheric quality of the experience: and it will be strangely familiar to anyone who lived through the last war and the aftermath of bombed-out streets and derelict architecture.
続きを読む
20人のお客様がこれが役に立ったと考えています
違反を報告
レビュー を日本語に翻訳する

Debbie Young
5つ星のうち5.0 Everyone should watch this classic at least once
2017年2月25日に英国でレビュー済み
Amazonで購入
Bought this as part of my effort to broaden my teenage daughter's appreciation off film to timeless classics (she's long been a fan of Laurel and Hardy and the Marx brothers) and was very gratified that she watched the whole thing, rapt. Film quality was excellent and that wonderful zither soundtrack still sends shivers down the spine. Artistically so perfect, wrapped up with airpunchingly good ending. Love love love. Will watch again soon.
続きを読む
17人のお客様がこれが役に立ったと考えています
違反を報告
レビュー を日本語に翻訳する

Baskerville
5つ星のうち4.0 Two flaws
2020年7月9日に英国でレビュー済み
Amazonで購入
Why was this masterpiece so needlessly marred? One flaw is well-known - what is meant to be the same cat is all too obviously three. Even if the long shot was done on location in Vienna and the close-up back in a British studio, couldn't they have found a reasonable lookalike? Less famously, in the introductory sequence (with Reed's voice-over) on occupied Vienna a shot of military vehicles and personnel (presumably taken from a newsreel) has missing frames. It cannot be (as in Criterion's THE FALLEN IDOL) subsequent damage because the voice-over continues across it. Why was the shot chosen? Nowadays CGI could remedy both problems, though it's a question whether anyone would pay for it. (A small curiosity: originally, the voice-over returned when Welles shot Bernard Lee. That has gone.)
続きを読む
3人のお客様がこれが役に立ったと考えています
違反を報告
レビュー を日本語に翻訳する

TheMagicPumpkin
5つ星のうち5.0 Fantastic release from Studio Canal
2017年4月10日に英国でレビュー済み
Amazonで購入
Fantastic release from Studio Canal. The 4K transfer looks great and I didn't need to shell out $100+ to get the OOP Criterion Blu-ray. I'm from the USA and bought this from Amazon UK without issue (arrived in less than two weeks). Everything but a couple of the supplements played fine on my Region A player.

My only complaint is the cover art, which is pretty unimaginative and completely leaves poor Joseph Cotten out. For me he is the real heart of the picture, and it's too bad his buddy Orson always gets the credit.
続きを読む
12人のお客様がこれが役に立ったと考えています
違反を報告
レビュー を日本語に翻訳する

D. Warren Piper
5つ星のうち5.0 Greatest film?
2020年3月9日に英国でレビュー済み
Amazonで購入
Some have argued that this is the greatest film ever made. What is undeniable is the wonderful lighting of the city, the haunting melody on the zither and the shots of people's heads. The story is spellbinding. The final sequence of the girl walking past and ignoring the man who has shot her love lives on in the memory.
続きを読む
4人のお客様がこれが役に立ったと考えています
違反を報告
レビュー を日本語に翻訳する
すべてのレビューを参照します
Amazonプライム会員ならお急ぎ便、日時指定便が使い放題
さらに、映画もTV番組も見放題。200万曲が聴き放題 。クラウドに好きなだけ写真も保存可能。
> プライムを無料で試す