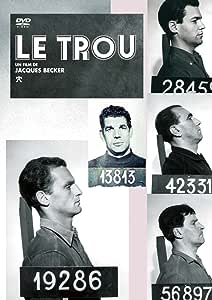 Keith M
5つ星のうち5.0 Becker’s Masterly Prison Drama
2016年10月14日に英国でレビュー済み
Amazonで購入
This riveting prison drama, made in 1960, was sadly Jacques Becker’s final film before his untimely death the same year at just 53 years of age. But what a crowning career achievement it is. Le Trou’s sense of claustrophobic tension does not let up throughout its two hours plus running time, steadfastly gripping this viewer’s attention via the film’s masterly dramatic construction and the outstanding set of acting performances from its quintet of incarcerated protagonists. Almost incredibly, given the quality of the performances, Becker cast (essentially) non-professional actors, making a comparison with Robert Bresson’s A Man Escaped even more pertinent. Le Trou, which was based on the real-life exploits of José Giovanni (Damiani), is perhaps most notable for its forensically realistic depiction of the various ingenious methods dreamt up (predominantly by Jean Keraudy’s 'expert lag’, Roland Darbant) to effect the quintet’s escape, but Becker’s film also provides as convincing a depiction of male bonding and camaraderie as I’ve seen, plus a subtle social commentary on the (apparent) differential treatment of prisoners dependent on social class.

As Marc Michel’s’s clean-cut, refined newcomer Claude Gaspard enters the confined world of Darbant and his three hardened criminal cohabitors, Becker’s drama focuses exclusively 'within these walls’, with barely any glimpses of external sunlight. The effect of the film’s narrowing sense of confinement and focus on character development is accentuated by the absence of any musical soundtrack and by cinematographer Ghislain Cloquet’s impressive use of lingering close-ups. Any initial suspicions dispelled, once the quartet are convinced that Gaspard has as much at stake as they do, the five inmates muck in together to progress their escape. This is where the film particularly impresses as, mixed in with some witty banter, we feel the physical demands of the quintet’s escape efforts (the four-minute floor-breaking sequence is mesmerising in its intensity) and revel in the seemingly endless series of inventive concealment ruses they have dreamt up. Of course, we’ve forgotten about the nefarious reasons for the quintet’s imprisonment – we’re rooting for them 100%, sympathies heightened by their humiliating treatment at the hands of the 'screws’ and by Monseigneur’s (Raymond Meunier) passing comment to Gaspard that the justice system is skewed against the 'underclass’ (a claim that will come back to haunt him).

Becker takes us on an emotional rollercoaster as the quintet fear ‘exposure’ at any moment in what is a relatively unfussy, but exemplary, example of (essentially) good, old-fashioned, cinematic story-telling. The quintet of acting performances is nigh on perfect, evoking a sense of group camaraderie that makes Becker’s moral twist and denouement all the more powerful. Certainly, as a prison drama, Le Trou is hard to beat and one can’t help wondering whether, had the film been made under the auspices of Hollywood, the film might have received the same level of commercial acceptance and acclaim as a film like The Shawshank Redemption.

Biffer Spice
5つ星のうち5.0 a wonderful film
2011年11月22日に英国でレビュー済み
Amazonで購入
this was recommended to me by friends, and if it hadn't been i might never have heard of it. why it isn't better known, i have no idea - it is, basically, a masterpiece. the performances, the tight script, the tension, the characters, are all top drawer. this is no hollywood film, with easy goodies and baddies to identify. the guards aren't sadistic bullies, they're as human as the prisoners. you don't know much about their lives before prison, but you feel you know lots about them, even without being told. i can't believe the cast were amateur; they drew me into their world, and i was gripped. a word for the direction too - impeccable. you really feel the prison as an extra character. the tension derived from the escape attempt is what makes this film so compelling - it feels so real, and it's the first time i've really gleaned how difficult it must be to try and escape from prison - never mind the logistics of it, but also the sheer repetitive bloodymindedness you have to show, and the nerve to cope with the idea that one slip and all is lost. that it leaves you wondering about certain things and certain people is all the better for the film. i have thought about it often since watching it, and i'll always have my own ideas on what really happened and what will happen next. a superb film, the best prison film i've ever seen, and i recommend this very very highly.
続きを読む
9人のお客様がこれが役に立ったと考えています
違反を報告
レビュー を日本語に翻訳する

jan
5つ星のうち5.0 Tough and gritty
2018年6月15日に英国でレビュー済み
Amazonで購入
This is a gripping thriller and the absence of any soundtrack makes it even more so -so many films in my opinion have too much that spoil
A no nonsense film that is REALLY worth watching
続きを読む
2人のお客様がこれが役に立ったと考えています
違反を報告
レビュー を日本語に翻訳する

Cesar G. Esterman
5つ星のうち4.0 Le trou
2011年11月19日に英国でレビュー済み
Amazonで購入
I bought this dvd to get something different and it was indeed.
The plot and tense moments during the film is outside the usual run of the mill story.
If you enjoy thrill and suspense do not hesitate to buy it.
The black and white is very suited to enhance the ambiance and atmosphere of the plot.
I could not call it in any "section" like romance, murder as it is not: it is well above all that.
I really liked it but i enjoy "suspense" films and was not disappointed.
Unusual and difficult to slot in any category but well worth buying.
The film last about 2hours but time flies as it is never boring.
続きを読む
3人のお客様がこれが役に立ったと考えています
違反を報告
レビュー を日本語に翻訳する