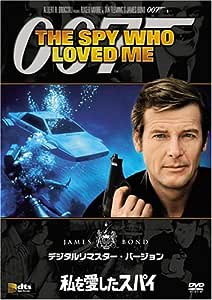 L.J.F.64
5つ星のうち5.0 Nobody drives underwater like Bond!
2018年9月8日に英国でレビュー済み
Amazonで購入
James Bond and a beautiful Soviet officer Major Amasova combine to investigate what happened to two of their countries submarines that disappeared.

One of the all time great adventures of the series with many legendry moments. The first thing to say is just how great the film looks, cinematographer Claude Renoir does a magnificent job creating an atmosphere and some of his locations are superb and set designer Ken Adam also does an excellent job creating the enormous blockbuster Bond sets. Roger Moore is excellent and by now has made the role his own, Barbara Bach as Major Amasova is also wonderful, she is one of the most well rounded "Bond girls", she's not only tough and self-sufficient but his equal in many ways and Curd Jurgens is a great bond villain. Lewis Gilbert return as director and does a great job maintaining the excellent pace and keeping the balance of action and drama just right, Marvin Hamlisch's score is very entertaining and very in keeping for time plus Carly Simon's theme song is certainly one of the best. There are other outstanding things about this film that make it stand out, Jaws played by Richard Keil is almost certainly the most memorable villain in Bond history, not just because of his enormous size (7ft 2in) but because the character was superbly played and written. Then there are the stunts and set pieces of which there are many, firstly the Lotus Esprit the car that turns into the underwater vessel,one of the most memorable scenes not just in Bond but movie history and then opening ski sequence and cliff jump both are just as amazing as you remember.

Re-watching this movie again I was struck by just how well done it was in all departments, I couldn't find a single thing I didn't like about it. A real classic that is well acted, brilliantly shot and written and lavishly produced spy thriller, one of my top 3 Bond movies. 5/5
続きを読む
1人のお客様がこれが役に立ったと考えています
違反を報告
レビュー を日本語に翻訳する

Graeme Shimmin
5つ星のうち4.0 The best of the Roger Moore James Bond movies and the apotheosis of the over-the-top spy romp.
2016年2月3日に英国でレビュー済み
Amazonで購入
Logline: When British and Soviet submarines are stolen, Bond and his female Soviet counterpart must work together to prevent a megalomaniac and his indestructible henchman using the submarines’ nuclear missiles to provoke world war three.

Although The Spy Who Loved Me is an enjoyable movie, it was made in the nineteen seventies, has dated somewhat and has faults, some a more forgiveable than others – the movie can’t really be blamed where film-making technology has improved.

The locations and sets are great: the gigantic supertanker set, Stromberg’s underwater base, the Egyptian pyramids and temples. But movies have better cinematography now, and a lot of the sets, the train, the submarine, various hotels and clubs, seem overlit and stagey.

The fight scenes are tame by modern standards, but that has its good and bad side: real fights aren’t the ‘ballet with fists’ we see today, and real punches don’t make a noise like an iron bar hitting concrete. And Bond actually looks scared when Jaws is beating the crap out of him, which is good.

The action set pieces and stunt work in The Spy Who Loved Me are some of the best in any Bond film. Iconic moments like Bond skiing off a cliff and then his parachute opening, the Lotus Esprit turning into a submarine, and the bows of the supertanker opening to swallow the submarine, are great and work perfectly. On the other hand, special effects to include the actors in the action scenes have come a long way. Some of the back-projection used to include close-ups of Roger Moore in the action scenes looks poor now.

Less acceptable is the script which is clunky, both in dialogue and plot mechanics, with a lot of brief logistical and plot exposition scenes. It also has Bond spout endless one liners, hardly any of which are actually funny. Scenes like Bond in Arab dress on a camel for no good reason are just an embarrassment. Also, by modern standards, the movie is quite slow – the opening half an hour in Egypt would be cut to about ten minutes these days – compare the pyramids scene in The Spy Who Loved Me to the similar scene at the opera in Quantum of Solace for example.

The acting is mediocre all round. Roger Moore is okay when he’s not leering or smirking, which is not often. His occasional serious scenes such as when he explains to Anya why he killed her lover are good, but there’s not many of them. Barbara Bach is beautiful, but wooden, and considering she’s supposed to be the KGB’s top agent she doesn’t get much to do.

Having said all that, The Spy Who Loved Me does still work, and I can forgive it a lot for the sight of Bond’s union jack parachute and the Lotus Esprit turning into a submarine.

Amazon Customer
5つ星のうち5.0 The Name Is Bond.....
2019年1月20日に英国でレビュー済み
Amazonで購入
Given " The Spy Who Loved Me" was released in 1977, I think most people would have seen it by now and you get what you'd expect from a James Bond film from the Roger Moore era - plenty of corn !!
Also good to see plenty of Royal Navy involvement in the film, from the era when my Brother was in the Service.
続きを読む
1人のお客様がこれが役に立ったと考えています
違反を報告
レビュー を日本語に翻訳する

Q
5つ星のうち3.0 enjoyable film ... but check exactly what you are ordering
2017年5月27日に英国でレビュー済み
Amazonで購入
the film is great - you should know that by now - but there is some sort of trick happening at amazon. i ordered the 2-disc set but the 1-disc version arrived. when i checked the original order, it definitely said "2 disc" on the main grouping but when i looked closely at the actual order number, it said "1-disc". mistake - or rip-off? caveat emptor!
続きを読む
3人のお客様がこれが役に立ったと考えています
違反を報告
レビュー を日本語に翻訳する