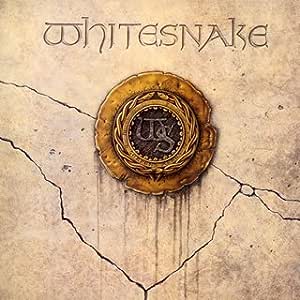 Dave
5つ星のうち5.0 Sharper, Clearer and Brighter.
2017年3月5日に英国でレビュー済み
Amazonで購入
First of all can I just make an observation a lot of us can identify with. We see something on AMAZON and want it as quickly as possible. That excitement when the post arrives you hope your order has arrived. Well this delivery was FAST. Ordered in the evening of the 3rd my two Whitesnake Cd's arrived approximately 6pm the following day. AMAZON Thank you.
1987: 20th Anniversary Collectors Edition.
I have actually always been a fan of the older Snake. I think Come and Get it was one of best Albums of the 80s. We kind of always new what we were going to get with a damn good Rock 'n' Roll Whitesnake Album. So at the time we all ran down to our record store the day our local Record shop had 1987 in stock it was a race back home to get this on the deck. We kind of all looked at each other with different expressions, excitement, disappointment and saddness. David Coverdale was attempting to break into the American market.
1987 is Marmite. You either love it or hate it. However now I have eventually got to the point of a review hopefully before you have slid into a coma. If you are a fan like me we put the Records down on some pretty old bits of kits then. Old pioneers and some old Hitachi equipment. Now my car system has a more pure sound than those bits of kit. I am running a Bad now and some of my old CDs sound very dated. After testing a Wings Band on the Run I brought all the Snake Remasters and 1987 sounds staggering. The vocals punch but without any sacrifice of Guitar or percussion. Ok, I am getting on a bit so watching Coverdale being slobbered over on DVD did not interest me. But live footage does and I can honestly say I have seen better Bootlegs. You know, that Donington DVD that was with the double CD. Yes, that bad guys. So, I it for your Remaster. It sounds great and in no way dated. Personally, I think some Albums should not be touched, they take you back to a time when the sound on the Record should remain that way. Jimi Hendrix for instance and many more. 1987 is Absolutely pure magic though.
続きを読む
2人のお客様がこれが役に立ったと考えています
役に立った
フィードバックを送信中...
フィードバックをお寄せいただきありがとうございます。
申し訳ありませんが、お客様の投票の記録に失敗しました。もう一度試してください。
違反を報告
レビュー を日本語に翻訳する

Peanut Brain 2016
5つ星のうち5.0 Still one of the greatest albums ever........Garbage Bonus Features
2015年8月31日に英国でレビュー済み
Amazonで購入
Lets get the bonus features out the way first,because they are crap.Sorry,but for an album of this magnitude & signifigance,they are simply not good enough.On the c.d. we have 'live versions' of the 4, 1987 singles,as previously released on the Live in the Shadow of the Blues album.Save, for Doug Aldrich's lead guitar work,they are pretty unremarkable ,hardly essential versions,at all.On the DVD,we have the promo videos for Still of the Night,Is this Love,Here I go Again '87 & Give Me all your Love Tonight, which feaure Ms.Tawny Kitaen doing,no doubt,what she did best,ahem.It all looks rather dated now,but at the time groundbreaking no doubt,I'm sure.Particularly in North America,where the image of the band was re-imagined for MTV in mind.Also on the DVD are live versions of these 4 singles.Yet again,these are already available on the 'live in the Still of the Night' dvd,so please bare that in mind before you part with your cash for this.........Now to the main event;the album itself.It's apparently re-mastered & certainly has a different running order to the original album,although no reason is given for this.Personally,again,I'm disappointed with the mix.The bass is way,way too low in the mix & at times,the backing guitars seem to drown the solo's.Just my view.If your a Whitesnake fan you will have this album.If your a rock/metal fan you will know the lead tracks.Trust me,the rest of the album is very,very strong also.Bad Boys,Children of the Night,Straight for the Heart,fantastic stuff.Completists will notice that Here I go Again (Radio Edit),& the reworking of Standing in the Shadow 87 are NOT here,neither is Need your Love so Bad.Strange that.The most intriguing thing here is found in the booklet.Geoff Barton is responsible for the notes,obviously Dave Coverdale features heavily,& talks at detail about his health problems,not about how he & John Sykes wrote together,who brought what,what influences they had,etc, but there is far,far too much emphasis on the line-up that toured the '87 record,which to this fan,is a nonsense.Coverdale is very cagey on the actual specific,exact, details that led to Sykes,Murray & producer Mike Stone's sacking.He also talks at length about marketing the video's for MTV USA,yet seems to forget that in 1987,virtually no-one in Britain had access to it!!!Thanks Dave.As is usually the case with Coverdale,there is selective memory syndrome & some contradictions with his story telling of how events evolved,certainly compared to some of his notes made on the Slide it In Deluxe Re-master,which is why this project cries out for another voice/viewpoint from someone else involved with the album.Again,just my view.To conclude;This remains 'the' greatest album of 1987,bar none,featuring the finest guitarist of 1987,who s***'s over that hat-wearing-over-rated fanny,from Stoke,on a bad day.Please refer to my original review for more detail.In all honesty this remaster sounds no different to the original,& the bonus/additional features are lame,yet the booklet that comes with it, is okay.5 Stars for this album every time,2 Stars for bonuses'.
続きを読む
役に立った
フィードバックを送信中...
フィードバックをお寄せいただきありがとうございます。
申し訳ありませんが、お客様の投票の記録に失敗しました。もう一度試してください。
違反を報告
レビュー を日本語に翻訳する