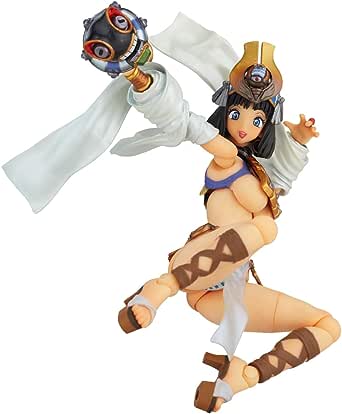 Newbie
5つ星のうち1.0 Floppy as a KO figure.
2016年7月30日にアメリカ合衆国でレビュー済み
Amazonで購入
I received my item today. For a figure of this price tag. She should be almost prefect. There's lot of QC issues with mine. Super floppy and the joints feels like KO. The only tight joints on her are the knees and the head. Everyting is floppy. Her torso, chest, shoulders and hips. Hell ahe cant even stand up. I Contacted the seller. Hope I can get this little problem resolve. Smh.. just holding her by the head and her whole body flops. Not kool very disappointed.
続きを読む

John M. Colandrea
5つ星のうち5.0 A Classic For Serious Collectors
2011年2月1日にアメリカ合衆国でレビュー済み
Amazonで購入
The Menace figure for the Revoltech like of Queen's Blade figures stands up to what one would expect from the quality. The sculpting is superb and a faithful representation, the figure is incredibly pose-able, (an aspect that is practically the trademark of the Revoltech line) and comes with numerous switchable alternative hands, faces and a very solid accessory: her staff Septra is definitely a cut above normal accessories Revoltech gives its figures.

Unfortunately, like nearly all Revoltech toys, the sheer posing ability is a double-edged sword. The smaller joints, particularly in the wrists and the hands feel fragile and there's the worry they can break.

However, one needs to take notice that unlike most of the Revoltech figures that have this problem, Menace herself has clothing aspects that help to reinforce the weak points. Menace's breastplate necklace is enough material around the neck that it covers the neck join and keeps it steady while her arm wrap bandages move up and over her wrists, keeping the wrist joints and hands very stable, including when she holds her staff. This aspect of her character design REALLY worked in her favor and acts to give her more stability than other Revoltech figures. Definitely a MUST buy for fans of Revoltech!
続きを読む
3人のお客様がこれが役に立ったと考えています
役に立った
フィードバックを送信中...
フィードバックをお寄せいただきありがとうございます。
申し訳ありませんが、お客様の投票の記録に失敗しました。もう一度試してください。
違反を報告
レビュー を日本語に翻訳する

BC
5つ星のうち5.0 Sexy figure!
2015年7月28日にアメリカ合衆国でレビュー済み
Amazonで購入
I'm a fan of the Queens Blade anime and when I saw they had figures, I just had to get one. I personally like Menace so I got her figure and let me just say it is really nice!
I love how you can customize her poses and use interchangeble faces. I wish it was a little bigger but that's fine. The way the joints look don't really bother me but you have limited range on her legs because of her booty. None the less, I love it and now I want all of them!
続きを読む
1人のお客様がこれが役に立ったと考えています
役に立った
フィードバックを送信中...
フィードバックをお寄せいただきありがとうございます。
申し訳ありませんが、お客様の投票の記録に失敗しました。もう一度試してください。
違反を報告
レビュー を日本語に翻訳する

Spuds
5つ星のうち5.0 Woah dem boobies!
2015年1月15日にアメリカ合衆国でレビュー済み
Amazonで購入
It is a wonderfully sculpted revoltech figure with beautiful details. Worth every penny. A must have for any fan of the series or figure collector. Plus she has sweet tits.
続きを読む
役に立った
フィードバックを送信中...
フィードバックをお寄せいただきありがとうございます。
申し訳ありませんが、お客様の投票の記録に失敗しました。もう一度試してください。
違反を報告
レビュー を日本語に翻訳する

One Man Army
5つ星のうち4.0 Revoltech Queen's Blade 006 Menace
2010年9月16日にアメリカ合衆国でレビュー済み
Amazonで購入
Ok hello everyone, it's been awhile since I've done a review for you all =O I've been busy/broke for awhile >_>; so haven't had the time or money lately to buy anything hehe until now~ got a few more reviews comin up in the next couple of weeks so stay tuned~

Ok Queen's Blade Menace, this is my 4th Revoltech Review so as my usual style I'll go over the figures strong points, and then its not so strong points.

1st and for most this toy is definitely not intended for children. If you have any knowledge of the queens blade series then you should know its target audience is the (im)mature 18+ crowd. Although i'm sure most of the fanbase is like 14 -.- I myself couldn't watch more than 3 episodes without feeling dirty...and coming from me that says a lot... Anyway, basically what i mean is there is Nudity in the figure, unlike other figures in Revoltechs repertoire. (Check my other reviews for a couple more Revoltech figures~ /shameless plug) This figure has full upper nudity as in the bewbies are sculpted and painted. This aint a barbie afterall, and if you have seen queen's blade every other scene is just boobs in your face, or the camera will switch to some unscrupulous angle to get the best cleavage and panty shots. (2nd season is worse :o can you say tentacles?) Anyway other than the 18+ crowd warning, Menace is also rather fragile or at least she feels that way, so definitely not for kids.

Well other than the massive chesticles on this figure theres a few great things I can point out. For instance, she comes with a few accessories, a total of 5 Hands, and 4 faces. Her scepter, Crown, and necklace are all separate pieces as well. So theres quite a bit of scenarios she can pose in. Her hair is on a hinge joint so u can lift it up and replace the faces, a nice touch although the top of the head has a big Hinge in it. I still prefer the way they did Movie ver. Yoko (i reviewed her! ok no more shamless plugs). Also she comes w/ a scarf, its not an actual cloth but really soft plastic which doesn't get in the way at all when posing, its really a nice touch. All of her clothing, faces, and accessories are brilliantly sculpted. They look fantastic~ and I hold pretty high expectations when it comes to a 40$ figure heh.
It seems Revoltech got a clue from Figmas awesome Figma bag for the figures accessories and included the revoltech box! for storing stuff. A small little orange box for storing faces,hands etc...however some of the accessories, like the scepter, are too big for the box even when u take it apart. And i've seen other figures who have pieces far too big for the little box. Its a damn shame cuz it a pretty stylish box.
The new stand is also great, much better than Revoltechs older stands, this one feels like...a figma...stand. hmmm am I seeing a pattern here. O.o
Maybe, maybe not, basically its a great stand w/ multiple revoltech joints so it can bend and contort along w/ the figure and hold poses. Revoltech joints are quite strong so this works out really well most of the time. Speaking of revoltech joints..

The joints... They work wonderfully. They really do it makes the figure so much more pose-able. Really she can pull off some great poses, its just that...they look horrible. Most of the pictures online show her in the best poses, which don't show just how clunky the joints look. Big balls connecting every part of her which aren't painted the same as her skin, its close but not precise (shoulder joints mainly as well as knees). Now even if you can get past that theres another problem, because they have so many revoltech joints, she feels rather flimsy. I feel like if I'm too rough i could snap her in half. She is also very light, i believe shes mainly hollow as well and wow is she Short. Maybe I was just spoiled by my other revoltech figures (Fraulein line) but shes just so small o.o I'm talking Figma Small~ Can of coke size.

Now the height of the figure isn't really a problem, as i've said in my Figma reviews (and for the most part i adore my figmas) The worst part is because there are so many joints, the body is sculpted very...awkwardly. For instance you'll never see it in the Online pictures advertising her. They want the figure to SELL afterall, but looking at her the Upper part of the back (which makes up the shoulders and bust) are seperate from the middle of the torso. Her torso is also seperate from the lower half which makes up the ass and leg sockets. so when shes in a sitting pose (which she can achieve very easilly) she has these big gaps in between her leg and the crotch area. In order to achieve a sitting pose you need to rotate the legs 180 degrees so that she can bend upward, then rotate thebafasfkaf its on the Box... eh but when Standing Normally as you see in the pictures she suffers from a sever lack of mobility in her legs. Its mainly because they sculpted her butt sooo big and her hips and thighs so thick, she can't really move. Its not too big a deal you can rotate the legs enough usually to get the right angle to bend but its a little clunky, and the other side will always have a big gap in it. I don't know maybe its me but this just gives a very inhuman feel to her. she looks great in a few poses but that just makes all the articulation go to waste if u keep her in the couple of poses that hide those joints.

The paintjob is great, the accessories and everything look awesome, but the lower legs suffer...its like they gave up when doing her leg wraps compared to the rest of her. "Screw it, we gave her boobies im done working today" was probably the motto of the artists when they had gotten down to the "minor" details.

Overall its not a bad figure, very Anime accurate i believe (haven't watched enough of the show to know, nor do i plan to -.-) its very well articulated and the accessories are nice, It's just fragile, small, lightweight, and really not as pretty as the images hype it up to be.. the separated upper back/torso/butt looks really weird when viewed from behind (***Edit*** i played around with mine and readjusted it, the butt and back line up much better now, so it doesn't look 1/2 bad). However if your into getting figures for posing, and dont have the money (or are just against paying 180+ $$ for a mass produced Sculpt) these are rather cheap alternatives that may not look as good as actual resin/pvc models, but make up for it in their infinite power of posing~
続きを読む
13人のお客様がこれが役に立ったと考えています
役に立った
フィードバックを送信中...
フィードバックをお寄せいただきありがとうございます。
申し訳ありませんが、お客様の投票の記録に失敗しました。もう一度試してください。
違反を報告
レビュー を日本語に翻訳する

William J. Mitchell
5つ星のうち5.0 great
2010年12月31日にアメリカ合衆国でレビュー済み
Amazonで購入
great over all figure and its not for the kiddies as it is anatomically correct and has many small parts that change be changed out for battle damage to a sexy look all just in how you want it to be
続きを読む
1人のお客様がこれが役に立ったと考えています
役に立った
フィードバックを送信中...
フィードバックをお寄せいただきありがとうございます。
申し訳ありませんが、お客様の投票の記録に失敗しました。もう一度試してください。
違反を報告
レビュー を日本語に翻訳する