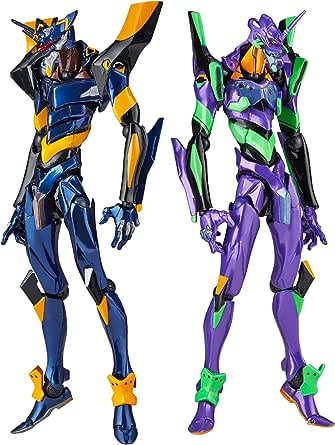 Ryan
5つ星のうち4.0 The Evangelion Evolution series eliminates a lot of problems and creates only a few more
2013年7月25日にアメリカ合衆国でレビュー済み
Amazonで購入
The Evangelion Evolution series is a re-release of all of Revoltech’s Evangelion figures from 2.0 onward. The original models released in the wake of the theatrical release have here been re-molded and been given different joints, hands, and accessories. This product is a dual-package, containing both Models number 100 (Unit 1) and 108 (Mk. 6).

(Note: for this dual-package the Mk. 6’s Lance of Cassius has been changed from silver to red. Unit 1 has also had its hands changed so that it too can be posed with the Lance of Cassius. As I do not own the individually packaged versions, there may be other inconsistencies I am not aware of.)

Unit 1 has received a significant upgrade from its original no. 68 model. The metal chest plates have been changed back from black to iron, and they are larger as well. The unit’s shoulder fins are now attached to the arms instead of the shoulders, which looks much more natural when posing and eliminates the need to fuss over them. The snap-on hands from the original 2.0 models has been replaced with small Revoltech joints, allowing a bit more freedom when posing with weapons and the like. The toe joints are now much stiffer, a welcome addition, considering how the No. 68’s toes would flop so much you were afraid they’d fall right off.

The only real beef I have with these models is the legs and the head. The legs are formed somewhat awkwardly. They look very artificial, even when posing them. The head, while of standard quality for Revoltechs, have incredible downward mobility, average side-to-side mobility, and practically no upward mobility to speak of. The head can only be moved to look slightly above staring straight ahead. The shape of the head makes it impossible to pose the figure howling at the sky.

Everything said about Unit 1 holds true for the Mk. 6 with a few exceptions. The shoulder fins on the Mk. 6 are thicker, and they bend outwardly as well (not a product defect; that’s how they are in the movies). The arms will not raise up as high, and the head is also perpetually forced to stare a little bit below straight ahead.

Both figures come with great accessories and pose well, but they are not without flaws. As long as you accept that they are not perfect, I am sure that they will make an excellent addition to any fan’s collection.
続きを読む
3人のお客様がこれが役に立ったと考えています
違反を報告
レビュー を日本語に翻訳する

Tane
5つ星のうち5.0 Amazing 2-Pack
2013年11月26日にアメリカ合衆国でレビュー済み
Amazonで購入
This Unit-01 and 06 combo-pack is an amazing value and both figures look stunning. If you don't own any EVA Evolution figures from Revoltech there isn't a better way to start your collection than this box set. Aside from the metallic paint (which is actually extremely good looking) these are the most screen accurate Revoltech figures for each one of these units. While Unit-01 definitely was not metallic in color on screen it suits the figure quite well. EVA-06 however was never seen in the clear of day and looked high-gloss anyways whenever it actually got screen time so the metallic finish is too perfect looking on it. This 2-pack also includes the properly colored "Lance of Cassius" whereas the original single-pack had a greyish one. The 2-pack includes the accessories from both single releases as well. Ultimately this was a very satisfying buy and I could not ask for more.
続きを読む
1人のお客様がこれが役に立ったと考えています
違反を報告
レビュー を日本語に翻訳する

Ruperto Valero Jr.
5つ星のうち5.0 Revoltech unit 1 and 6
2018年1月1日にアメリカ合衆国でレビュー済み
Amazonで購入
Great figures for rough play and possibility. This may be repaint, but these metallic versions are remenisent of the kaiyodo zembec unit 1 prior to revoltech taking over the line. If you want perfect versions too perfect to play with- go for robot spirits. You want to play hard, stick to revoltech.
続きを読む
違反を報告
レビュー を日本語に翻訳する

Kelly G
5つ星のうち5.0 A good buy for the price
2013年7月20日にアメリカ合衆国でレビュー済み
Amazonで購入
I really enjoy the Revoltech series Eva figures, because for the price, they come with some pretty detailed and show accurate coloring jobs, as well as articulating in every way imaginable. The two-for one deal, while not the greatest price, is still a great buy for coming with free shipping and not taking a month to come in from japan. The led effects are cool as well.
続きを読む
違反を報告
レビュー を日本語に翻訳する
すべてのレビューを参照します
同様の商品をご覧になりませんか？ こちらのリンクで参照ください。エヴァンゲリオン初号機
Amazonプライム会員ならお急ぎ便、日時指定便が使い放題
さらに、映画もTV番組も見放題。200万曲が聴き放題 。クラウドに好きなだけ写真も保存可能。
> プライムを無料で試す