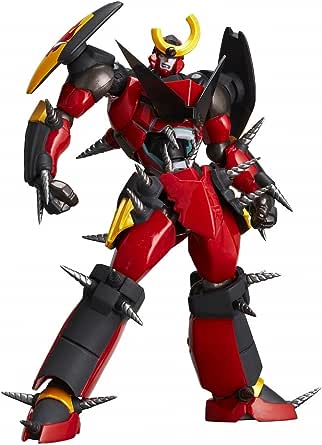 One Man Army
5つ星のうち4.0 Gurren Lagann Full Drillized
2009年8月4日にアメリカ合衆国でレビュー済み
Amazonで購入
This figure really isn't made for children, the drills sticking out all over the body are actually quite sharp, and are pretty stiff. That and the revoltech figures are more pose friendly than play friendly. The joints can break if your too rough with them, but are sturdy enough to hold just about any pose.

The Revoltech #058 Gurren Lagann Full Drillized version is a pretty sweet figure. If you've seen the original version (the non-drillized version) Revoltech's #50, you probably won't notice any significant changes to the figure other than the drills sticking out all over the body.

There are a few subtle change for the better in the full drillized version, the sunglasses on the torso have a nice metallic finish on them. Not a big difference, but a nice touch. Looks pretty cool in the light.

The second change is with the ignition key/Drill arm. In the full drillized version, its silver. Since it doubles as the Drill arm for the Gurren Lagann's super move (The giga drill break)It looks pretty cool. Now the original version of the Gurren Lagann, Revoltechs #50, the ignition key was gold, which isn't anime accurate when you attach it to the figure.
Now the Ignition key in the anime is gold, and the drill arm is silver, if you don't care about anime accuracy don't let that influence your choices.

All the same articulation from the original is there, the chest plate can swivel for emoting the torso face. The glasses do come off but are a real pain to take off the 1st time. Be careful when u pop them off so you dont break the glasses. once their off there was never a problem removing them again, just kinda stuck that 1st time.
Another downer for this figure is that if you do own the other Gurren Lagann figures and actually have all the parts for the Gurren Wing (1 piece per figure, total of 3 pieces I believe)you can't connect it to this figure.the 4 holes in the back are, you guessed it, filled with drills.

However if i may add my 2 cents, if your just buying your 1st figure now, don't let the Gurren Wing stop you from buying this instead of the original. The other figures needed for the Gurren Wing set are discontinued and quite expensive. So if your just looking for something to pose (and or play with) this is a pretty good figure and rather inexpensive as well.
続きを読む
10人のお客様がこれが役に立ったと考えています
役に立った
フィードバックを送信中...
フィードバックをお寄せいただきありがとうございます。
申し訳ありませんが、お客様の投票の記録に失敗しました。もう一度試してください。
違反を報告
レビュー を日本語に翻訳する

arianna
5つ星のうち2.0 Small and underwhelming
2018年3月7日にアメリカ合衆国でレビュー済み
Amazonで購入
Product was small and i could see through the box the paint on the figure was chipped. Bought it for a christmas present so it was incredibly upsetting to have to return and find something else.
続きを読む
役に立った
フィードバックを送信中...
フィードバックをお寄せいただきありがとうございます。
申し訳ありませんが、お客様の投票の記録に失敗しました。もう一度試してください。
違反を報告
レビュー を日本語に翻訳する

Fuwa Tochii
5つ星のうち3.0 Was missing a piece
2017年5月15日にアメリカ合衆国でレビュー済み
Amazonで購入
This was a gift given to my boyfriend during Christmas, I didn't realize until Christmas Day, when it was opened, that an important piece was missing. You can see from the second picture that there is a drill base, but no drill head to go with it.
続きを読む

Samantha Wells
5つ星のうち3.0 It looks so nice!
2019年11月19日にアメリカ合衆国でレビュー済み
Amazonで購入
It looks so nice! I dont usually get poseable figures, I find them to be a hassle but I caved and got one. Still figuring out how to pose him but he looks amazing. The drill bits are so pokey but other than that, not a single complaint
続きを読む

Jack
5つ星のうち5.0 Revoltech Gurren Lagann
2011年9月18日にアメリカ合衆国でレビュー済み
Amazonで購入
I recieved this figure earlier this week and was very pleased with it.

I did have a few minor issues with it though. When replacing one of the hands, I pushed to hard and my thumb went straight into one of the drills and started to bleed. Be careful when replacing the hands and try to keep the joint facing the side of the drills instead of the point. When I tried replacing the heads, the crown part on the normal head's helmet came off. Be careful when changing the heads because that piece, at least on mine, wasn't very secure and now needs super glue to be fixed. The core drill that comes with the figure is also able to be used as a giant drill hand. Here's the problem though: The two tiny drills on the arm make it rather difficult to put the core drill on his wrist joint without bending the wrist drills.

On the plus side this figure is definitely worth the money you pay for it. It looks exactly like Gurren Lagann in the anime and has a great amount of articulation, making just about any pose from the show possible. The alternate hands, head, and chest plate make this figure even more fun. If you're a fan of the anime or just like the look of the figure, it's definitely worth picking up as long as you're careful with it.
続きを読む
2人のお客様がこれが役に立ったと考えています
役に立った
フィードバックを送信中...
フィードバックをお寄せいただきありがとうございます。
申し訳ありませんが、お客様の投票の記録に失敗しました。もう一度試してください。
違反を報告
レビュー を日本語に翻訳する