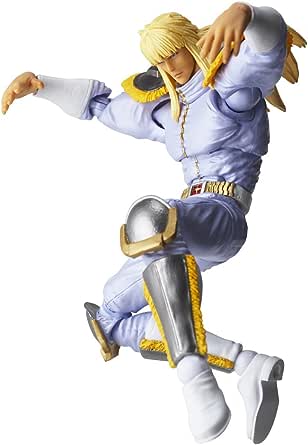 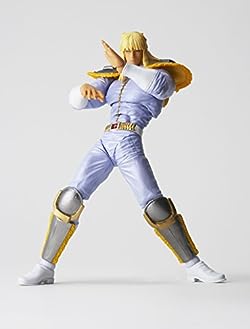 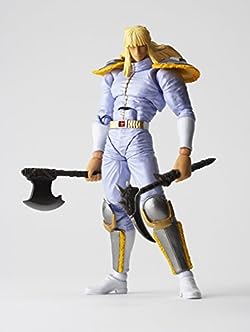 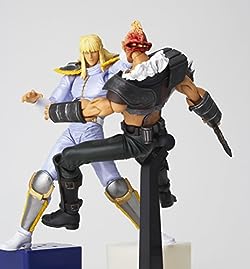 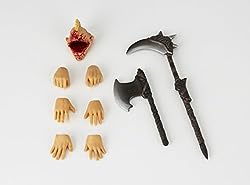 CF
5つ星のうち3.0 Decent figure but a lost chance to improve such iconic characters
2016年11月4日 - (Amazon.com)
Amazonで購入
I can say that overall it is nicely done; the clothes are relevant to the anime, and in the end, the articulation is decent, but there is a huge flaw in the hips.
Almost all Revoltech figures are famous for being super posable; the joint are plastic, so won't win any award for durability, since plastic with time change and brittle, but at least you can make a ton of crazy poses...while for the "Fist of the North Star" characters; they decided to go for the route of a weird swivel articulation, that rotate 45 degree. Imagine the old GI-Joe figures, before they became posable.

It solve the horrible look of revoltech joints (basically a ball), but limit very much the poses and you will have to struggle a lot to get in the right pose, if you are used to other figures like the SH Figuards or even more posable figures like from the Bandai Super Robot Chogokin series, or the Sentinel Tatsunoko figures. Here we talk about figures that do martial arts poses, flying around; if you don't make them pose well, it is a waste for such figures

It is sold cheap, and that's OK, but I would not mind spend more for a premium but get decent figures, like in the 50-80 range, and get something with accessories and well sculpted faces, with good articulations. Sadly they did revive the line, re-printing the original revoltech figures, and lost the chance to improve them. I own various Revoltech figures, and for sure the ones from this series are the hardest to handle and pose.

Amazon Customer
5つ星のうち5.0 this figure is awesome no issues
2016年2月1日 - (Amazon.com)
Amazonで購入
Overall, this figure is awesome no issues, product is too clean to not have if you are a fist of the north star fan (hokuto no ken). Great articulation can be improved though. But you are able to recreate memorable secret arts with the figure and other revoltech FOTNS figures. Just a warning this figure and the rest of the line are extremely fire. the spew flames. I was extremely surprised they were able to ship him without having it melt through its box. That is how fire it is. i keep him and the rest of these figures next to a fire extinguisher because they have the potential to burst into flames because no one is ready for these fire figures. Overall, i love Shin AKA King. Great figure and i highly recomend the King, aka Mr. Steal Your Girl. Props to Revoltech for giving us such a fire figure.
続きを読む
3人のお客様がこれが役に立ったと考えています
レビュー を日本語に翻訳する

Michael Gonzalez
5つ星のうち4.0 A decent figure, but definitely not a toy
2016年2月29日 - (Amazon.com)
Amazonで購入
This figure is pretty good for its price. It's really pose able, but has some faults. While it might just be mine, I decided to share just in case.

Some of the joints are stiff, and can make getting some poses kinda difficult. I mostly find it in trying to switch out the hands, as they're interchangeable. The only thing that I was really disappointed with, is the fact that the hair for Shin is really fragile. I broke it upon getting it out of the packaging. Luckily, it didn't break off entirely, and I can still use it, but it's so frail that you really need to be careful. Other than that, it comes with a lot of accessories, including an alternate head for the Zeed figure, so Shin can eliminate any disloyal subjects. I can't figure out how to get it to look like in the picture though.