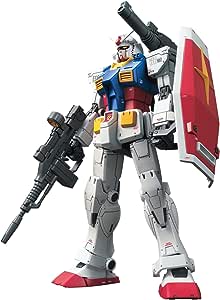 Anonymous Bosch
5つ星のうち5.0 Really cool little kit for newbies or experienced modellers.
2020年5月19日にアメリカ合衆国でレビュー済み
Amazonで購入
Although it doesn't totally transcend expectations, this is definitely one of the very nicest kits in the High Grade (HG) line. The construction is still relatively simple, and similar to other kits based on The Origin, but the sculpt is closely modeled on its Master Grade big brother, which means there's a lot of nice surface detail and panel lining opportunities. Compared to the older Revive version, it feels a lot more detailed and "realistic."

If you're new to gunpla, this is a good kit to cut your teeth on. You can build it in a couple hours, it is maybe around 160 parts I'd guess. Nothing too challenging. There is not a great deal of need to paint -- the only color correcting stickers are the eyes (a yellow piece that is meant to be black and gold), the small yellow chevron on the crotch piece, and the gray circles on the arm and leg joints. These are all pretty passable, although I didn't use them personally. There is also a sheet of transparent decals, like other Origin kits, which are a nice bonus not found in most HGs. I am using waterslides (purchased separately) so I cannot vouch for their quality, but they look similar to those included with RG kits (pretty good as long as they are applied to light-colored, flat surfaces). If you were to build this just straight out of the box and then go over it with a panel marker, I imagine it would look pretty decent. I WOULD put a tiny dab of glue (super glue or plastic cement) on the red jewel on the head, because mine liked to fall off a lot and it's VERY small. Just glue it to be safe, you DON'T want to go on a scavenger hunt for it later.

If you're a more experienced builder like myself and you want to paint and detail the kit, this is also one of the best kits of this grade/price point. It packs a ton of excellent surface detail, so there's lots to paint and line. With a good paint job it looks shockingly close to a scaled down version of the Master Grade kit. Obviously the construction is much simpler, but the articulation is still excellent, able to pull of just about any pose. The leg even has that nice separation that the MG has. Other than the afformentioned head piece that I had to glue, it's solid as a rock, and makes for a very sturdy, stable figure.

It isn't quite as impressive as the Moon Gundam, but in my opinion, it is the best HG version of the RX-78-2 out right now and one of the best HG kits period. We'll see if that opinion changes when the Beyond Global version releases.

Attached pictures are of my build, which has been painted in custom colors and decaled with after-market water decals (not included). They are intended to represent how the kit can look with some additional effort, rather than just building with what is in the box.
続きを読む