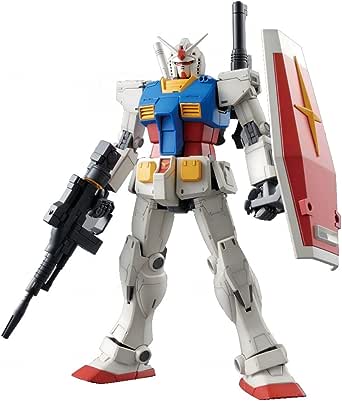 jonnyjj
5つ星のうち5.0 Great mecha
2020年3月8日に英国でレビュー済み
Amazonで購入
The package came very quickly, 13 days. I like this model as it is the only rx-78 that I actually like the look of. This model has so many additional weapons and accessories this is one of my favourite.
続きを読む
役に立った
フィードバックを送信中...
フィードバックをお寄せいただきありがとうございます。
申し訳ありませんが、お客様の投票の記録に失敗しました。もう一度試してください。
違反を報告
レビュー を日本語に翻訳する

Gagan Chennai
5つ星のうち5.0 Shipment On Time/Original/Excited :)
2018年12月3日にインドでレビュー済み
Amazonで購入
Box was delivered undamaged: so happy as I will be framing the front portion. All contents are in the box. Runners/parts are colored and not in resin (unpainted) form as shown in the pics of product. So, don't worry if anyone had that question. Thank you, Team UnboxJapan! : )
続きを読む

David I Mausolf
5つ星のうち5.0 The 2015 "RX-78-2 Gundam"
2016年5月25日にアメリカ合衆国でレビュー済み
Amazonで購入
Another year, another model of the RX-78-2 Gundam from Bandai.
It's like seeing another yearly release of a popular sports car. It's the same basic look, but the engineering and features gets better with each iteration. So what's new with this latest Master Grade version of the most popular Gundam ever?

For starters, this is a bit of a bit of a redesign based on the "Gundam The Orgin" manga/OVA version of the RX-78-2. The most notable differences are a shoulder cannon, various added machine cannons, and a more boxy, squared off shoulder and torso design. (Watch out for the yellow vent pieces on the chest, they tend to fall out, might I suggest some glue?) Underneath, 90% of it's insides are entirely new, engineered for even greater posing. The only tiny reused bits are a few parts from the Gundam 2.0 for the arms. With the provided accessories you can display the kit in either it's intended Origin version or a more standard RX-78-2 version (albeit with some extra guns).

You get two "2" beam rifles with this kit. One is the normal, standard Gundam rifle. The other is the Orgin Beam Rifle which looks quite looks nice. However I must add that the clear lens piece on it does not tend to stay in place so you may have to employ creative means to keep from loosing it. You get the standard shield, which can be displayed either right side up, or upside down. (I don't know what the tactical value is of having the shield upside down is, but that's the way it's often portrayed in Orgin style). You also get a rather nice hyper bazooka, slightly redesigned for this kit. Two beam saber come as well, though you can only have one on the suit in Orgin style.

The beam rifles and bazooka all have attachment pegs to allow you stow them to either the back hip or back of the back of the backpack. They can also be attached to the underside of the shield if you want. (No, you can't attach the rifles to the arm peg holes like the Gundam 2.0 could. :( )

Now about that shoulder cannon. It's a great little gimmick with a slightly complex folding/swinging up over the shoulder system. However there is a catch with it. Should you choose to go with it (and why wouldn't you?) you'll find that this piece stretches out the polycap in the backpack. Once that happens, the beam saber holder part that replaces it won't fit back in securely and be forever limp and loose. So you pretty much have to decide if you want this kit to have two beam sabers from the get go, or just forgo one for the cannon.
It has a cannon, just go with the cannon.

Now for some of the little things. There are various added machine cannons on this Gundam. A vulcan in the right shoulder, which you have the option of having a matching blue or clashing yellow cover for. A... I think it's a flare or small grenade launcher for the left shoulder. You get the option of having machine cannons on either both forearms or just one. I think it's silly Bandai didn't just provide an extra blank cover for having no forearm guns, but whatever.

By now you might be thinking, great! Sounds like a totally loaded Gundam with everything the previous had and more.
But wait, where's that danged core fighter?
There is no core fighter.

Take it as a blessing here that there is no core fighter. In the absence of having a solid box stuck in the abdomen of the Gundam we now have a Gundam that can do ab crunches. Joy. From my understanding, the Orgin Gundam is a "early" version of the RX-78-2 in which the core fighter wasn't incorporated yet. I find the story explanation puzzling since I always assumed the Gundam was designed with a core fighter in mind in the first place, but I'm not missing it here. You get much more natural posing out of the torso now than in any previous MG Gundam kit.

The kit will take a LED if you have one. I have green ones, but green seems to the wrong color for this kit. I don't know if Bandai has yellow LEDs, but if so that would be more appropriate. The decals provided are the sticker form. Hands if you're curious, are the 3.0 style with fold out pegs. Watch the pinkies.Cockpit also opens downward, a new one for me. That makes three ways I've seen the Gundam's cockpit open up now.

Last, but not least, you do get some nifty gun effect parts for the many body cannons. Effect parts for guns are a bit unheard of to me in regular releases so I thank Bandai for the nice bonus.

Well, I think about covers it. Despite it's minor flaws this is a wonderfully well engineered kit and a marvel to have. I admit I'm not always so keen on seeing yet another RX-78-2 Gundam from Bandai when there other suits I'd rather see them make, but in this case they did enough new and different to warrant it. Now if this thing would actually show up in the OVA... Me thinks Bandai might had jumped the gun a bit, but we still got a great kit.

Perhaps we'll get an MG Origin version of Char's Zaku II this year to go with this.

Zack Rimstidt
5つ星のうち5.0 Redefines the RX-78-2 as a MG model
2016年11月1日にアメリカ合衆国でレビュー済み
Amazonで購入
I know there are a lot of RX-78-2's out there now, but this one really redefines the mobile suit as a model. I have built a couple high grades, a handful of real grades, and some master grades. This was far and away my favorite. There are a lot of parts which makes this build take a little longer but that is what I was looking for. Each piece has plenty of detail and the exterior pieces look really nice after some panel lining. I would recommend this to anyone, however if this is your first mg then be ready for a challenge.
Cons:
-when breaking in the fingers, they are prone to popping out, and the pinky will often fall out after this.
-The beam saber blades fit somewhat loosely in the handle.
-The scope on the larger rifle is loose and does not hold its position

Pros:
-The shade of white used looks really good.
-The large rifle looks incredible, kit also includes the standard RX-78-2 rifle.
-Model is solid with a good range of motion.
-Option for Led.
-Can change the color of the right shoulder panel for the gattling gun, and can equip wrist gun on either on or both wrists.
-Plethora of detail on every part.
-The new method of weapons attaching to the hands is very secure.
-The armor shirts move out of the way easily.
-The included effect parts really make this model stand out.
-Both rifles, the bazooka, and the shield and be mounted to the back of the waist.

I am very happy with this model and highly recommend it. It is a challenging and satisfying build. Buy and enjoy!
続きを読む

Cesar Martinez
5つ星のうち5.0 Great Kit
2018年11月8日にアメリカ合衆国でレビュー済み
Amazonで購入
My favorite Gundam rx78! and my first build wasn't to bad at all... like in idiot I didn't use in exacto knife or any other tools just a pair of scissors and made minor errors, but I would highly recommended too order a basic model tool kit especially for the small parts! wish you the best of luck with your build.
続きを読む
1人のお客様がこれが役に立ったと考えています
役に立った
フィードバックを送信中...
フィードバックをお寄せいただきありがとうございます。
申し訳ありませんが、お客様の投票の記録に失敗しました。もう一度試してください。
違反を報告
レビュー を日本語に翻訳する

Alex
5つ星のうち5.0 Quite the kit!
2018年9月10日にアメリカ合衆国でレビュー済み
Amazonで購入
Absolutely amazing is the words I would describe this model kit! The solidness and build quality are like no other. You can basically do any pose you want, which is always a plus when it comes poseability. 👍 The only downside is that certain fingers are somewhat loose.
続きを読む

Jake
5つ星のうち5.0 Good things do come in small packages
2016年2月3日にアメリカ合衆国でレビュー済み
Amazonで購入
For being the original Gundam you wouldn't believe how well detailed this version is. I've been wanting a good quality MG RX-78-2 for years now and this one was the right one to pick over the Ver Ka & 3.0.

+ This thing can strike almost any pose you can imagine. The overall amount of articulation is uncanny. A huge personal plus to me are the 3.0 hands, where each finger moves independently, I've been adamant about those ever since the Nu Gundam Ver Ka.

+ Over all coloring is surprisingly good, you don't have to go back and touch it up unless you absolutely want to, this includes some panel lines.

+ There is an expansive arsenal for one suit. This might be The Origin version, but he is packed with all of the original weapons as well. Just in case you want the "original" version instead of the new version.

- There's no Action Base included to extend the range of poses. That's the ONLY gripe that I can really come across that I had with this kit.

Other than that, this is probably the most perfect MG RX-78-2 ever done (so far). In terms of overall size, this guy is TINY compared to the RX-93 ' Gundam Ver Ka & the RX-0 Unicorn Gundam Full Armor Ver Ka, but the attention to detail is much more evident.

*** The imagines here on Amazon simply do NOT do this Master Grade justice, I would recommend googling it to see just how versatile it really is! ***

Now to hoping that maybe this year there will be a version of Char's Zaku from The Origin, it's long overdue time that we have a newly sculpted Zaku.
続きを読む
5人のお客様がこれが役に立ったと考えています
役に立った
フィードバックを送信中...
フィードバックをお寄せいただきありがとうございます。
申し訳ありませんが、お客様の投票の記録に失敗しました。もう一度試してください。
違反を報告
レビュー を日本語に翻訳する