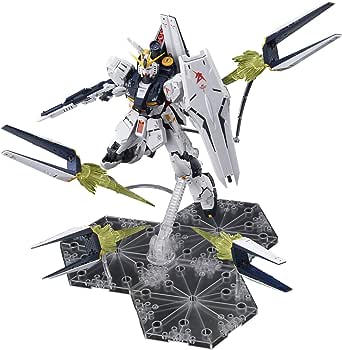 Ross
5つ星のうち4.0 Great Beginner RG Kit
2020年9月6日にアメリカ合衆国でレビュー済み
Amazonで購入
This is my first RG kit since before they kit double digits. Compared to the RX-78-2, and Char's Zaku RG kits this thing is on an entirely different level. All the joints are solid, nothing is flimsy, and the end result is pride instead of partying because it's over. Before I get to complaining I just want to say I love this kit, and highly recommend it to anyone. It's that perfect combination of challenge, and fun from a Gunpla kit. The Extra stuff for the Funnels it comes with is well worth it if you don't already own the stand alone kit.

There are a few weak points in this kit, I will say that it might just be me though. The shield has a poor connection. It makes sense, it's just bad. Somehow it's strong enough not to pop off when you hold the Gunpla up by the Shield, and weak enough to pop off if you sneeze wrong when it's on your desk. It's also somehow strong enough to pop the piece it connects to off the arm.

The Fin Funnel stands aren't as strong as I'd have liked either. Another one of those legendary sneezes, and not only will you be checkin your pants to make sure you didn't have an accident, but the Fin Funnels will just rotate and fall over in the stand! Not so much the stands fault, more so the angles the designers chose to hold up the FF.

Finally the stickers. I don't mind them, they add detail. The issue is the instructions for the sticker placement is a convoluted mess of lines, and numbers that sometimes don't make placement location clear enough. It's not impossible, but it isn't friendly either.

Just take your time, you'll be fine. The end result is well worth it.

P. Ugale
5つ星のうち5.0 The RG 1/144 scale GOD of articulation!
2020年5月13日にアメリカ合衆国でレビュー済み
Amazonで購入
So excited to finally get this kit! It’s articulation literally blows every single RG kit that has been released out of the water! So you know you can pull off those crazy outlandish poses! Ever wanted your RG gundam to cross arms in a B-Boy stance?wanted to do that crazy looking Jojo pose with flair?! Look no further THIS IS THE KIT YOU WANT in RG form factor! This is crazy how much detail, and how good this kit really is! WHY ARE YOU READING THIS GO BUY ONE NAO!!
続きを読む
違反を報告
レビュー を日本語に翻訳する
すべてのレビューを参照します
Amazonプライム会員ならお急ぎ便、日時指定便が使い放題
さらに、映画もTV番組も見放題。200万曲が聴き放題 。クラウドに好きなだけ写真も保存可能。
> プライムを無料で試す