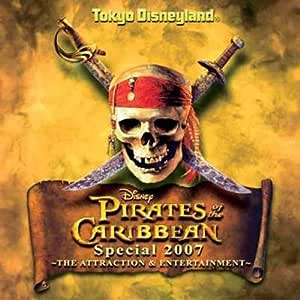 MBrilhart
5つ星のうち4.0 Ya' come seekin' the updated attraction soundtrack, eh? Sure ya' come to the proper place...
2013年1月23日にアメリカ合衆国でレビュー済み
Amazonで購入
Currently, this is the only official Disney sanctioned release of the current version of attraction soundtrack. That alone should be enough to make this CD worth having for any Disney Park fan. That being said, the CD only has four tracks on it; two of which are re-releases and only one of which is 100% new and never before released.

Track 1: Welcome - 00:28 - The same excerpt of Walt Disney from the World of Color broadcast heard on the Disneyland Forever Pirates of the Caribbean CD release in America in 1999. Really, this is just to take up disc space IMHO.

Track 2: Ride-Through Mix - 10:08 - The best track on the CD, even though it does have it's share of issues. As far as ride-through's go, this mix takes you through the ride a little bit faster then the attraction does, giving you only half of ever scene except for the Talking Skull and Bombardment Bay scene. The way it jumps from scene to scene so quickly is a bit irritating, as the ride lasts longer then the mix, so there's no reason why it couldn't have been extended to 15:00 minutes or so. Also, the voices of Davy Jones, Barbarossa, and Jack Sparrow are absent from the mix; apparently due to licensing disputes regarding the release of any voice work, because WDI failed to negotiate that into the contracts for said actors when they recorded the updated soundtrack. However, the new musical cues and updated voices of the Well Captain and Pooped Pirate are present, making up for the lack of the other new voices. The new music cues include an clip of the updated bayou banjo strumming Yo-Ho near the begging; a clip of the pan-flute version of Yo-Ho heard in the grotto scenes; a clip of the amazing pipe organ version of Yo-Ho heard in the transition tunnel where the waterfall with Davy Jones is located in the ride; the full version of the battle music (accompanied by the new sfx tracks and pre-2007 voices); clips of the new underline version of Yo-Ho, as played on Accordion, Strings, and Mandolin; and a clip of Musical Trio's accompany instrumentals in the burning of the town, including a more prominent accordion and acoustic guitar (the instruments they play in the scene) There are various editing and mixing blunders through out that hinder my ability to enjoy the track 100%, but it's the little things that count in this mix; and there are a lot of them. Basically, if you want the post 2006/2007 attraction soundtrack, this is the only official track you can get it in.

Track 4: Wet & Wild Pirate Night - 11:56 - Honestly, I have no idea what this track really is other then an entertainment something from Tokyo Disneyland. It's really an extra IMHO, but that's just me, as I have no clue what to make of it because the only nighttime entertainment that I've ever gotten excited for at Disney is the Main Street Electrical Parade. This is the only 100% never before released track on the CD.

Overall, if your desperate to own a copy of the new post-Sparrow attraction soundtrack (minus the voice of Sparrow) this is your only option. The mix could have been longer and better, but I won't complain too much, because at least Tokyo Disneyland released an updated mix. That's more then any of the American Disney parks have done... still waiting for "Grim Grinning Ghosts: The 2007 Re-Haunting Version" and "Yo-Ho A Pirate's Life for Me 2006" to show up on an American park album... waiting... waiting...
続きを読む
1人のお客様がこれが役に立ったと考えています
役に立った
フィードバックを送信中...
フィードバックをお寄せいただきありがとうございます。
申し訳ありませんが、お客様の投票の記録に失敗しました。もう一度試してください。
違反を報告
レビュー を日本語に翻訳する