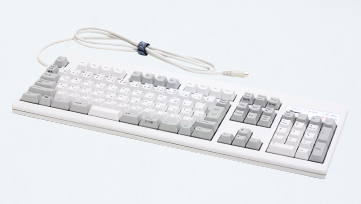 Trevor
5つ星のうち5.0 Solid & Smooth... With Some Quirks
2017年4月19日にアメリカ合衆国でレビュー済み
Amazonで購入
This is a bargain. When I bought it it was $189, which is a full $70 less than the other topre keyboards out there. I've had this keyboard for a month now, and I still get excited to type on it whenever I can.

First, I owned a Noppoo Choc Mini with Cherry mx black switches. I found those really difficult to type on. I went to the complete opposite of the spectrum with another Choc Mini but this time with Gateron clear switches. It is really nice to type and game on, but I make a lot of mistakes when I use it because the keys are so easy to press.

I've always wanted to try out a Topre board to see what the hype is about, and now I totally get it. It is extremely satisfying to type on, and makes everything very comfortable. I find myself not using my headphones because the sound of the keys bottoming out is so satisfying.

As far as build quality goes, I had no idea that keyboards could be this solid. Seriously, this thing weighs a ton. Normally I would be upset that there are only two rubber feet on a keyboard, but this thing is not moving anywhere when you put it down. The keycaps are extremely comfortable and soft to the touch. Keychatter is still there, but much less apparent than on my other boards. When you start typing on this, you know it's a premium keyboard.

Lastly, this is a Japanese layout keyboard. Some keys are not in the same place. Some frequently used keys that trip me up still are " ' ~ * _ @. However, I'm learning Japanese and am super into the retro Japan look, so this purchase was easy to rationalize. If you're also wanting to use this keyboard to type in Japanese, Google has a very good input handler that helps you use it. Much better than the default windows one. Search up 'Google Japanese Input IME', and install that. There are full sets of instructions on how to set up your Windows settings to be able to type, and it would be easier if you searched it instead of me explaining it here.