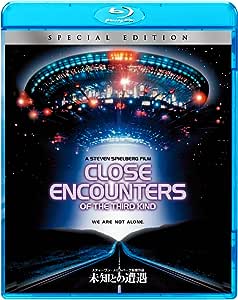 A. W. Wilson
5つ星のうち4.0 CLOSE ENCOUNTERS 2 DISC SPECIAL EDITION 2007 BLU RAY
2019年3月2日に英国でレビュー済み
Amazonで購入
Some of the reviews here on Amazon are confusing to say the least. Different versions of the BluRay, and reviews for a book about "Game of Thrones". To be clear...This review is for the BluRay 2007 release with the silvery front cover, not the "mother ship" multi coloured front page from 2012. I have to say that for a BluRay for such a classic well known film the quality is disapointing. Yes, it is very good in a good DVD kind of way, but, somehow I expected better. Perfectly acceptable and a good Panavision transfer, bars top and bottom, good sound and variable subtitles (not always clear when on a bright background, but my wife managed). I watched the Theatrical Version, so can't comment on "Special Edition" or Director's cut (tho I have seen Director's Cut on DVD and prefer the theatrical version). Loads of extras but, sorry, not seen yet. On seeing this back in it's original Cinema release, I was left genuinely speechless. The whole film had a profound effect on me, but watching it now some 40 odd years later it wassn't quite so wonderful. My problem was Dreyfus and the way his character was written especially the "Devil's Horn" sequence in his house. Terri Garr, who I love, seemed to be half asleep, but the rest of the cast were all good. I still find the appearence of the "Mother Ship" to be mindblowing, and this last 30 minutes or so make the whole film still well worth watching. After all, it was, then, a hit, and it still is a classic of the genre, and it is a good VFM price.
続きを読む
9人のお客様がこれが役に立ったと考えています
違反を報告
レビュー を日本語に翻訳する

Tele-Addict
5つ星のうち4.0 Kind on the eyes
2019年9月18日に英国でレビュー済み
Amazonで購入
The 4k collectors edition has 3 discs and 3 versions of the movie for both the included Blu-ray and 4k editions. The 3rd disc contains Blu-ray extras. Remastered it looks beautiful in Dolby vision, the colours are simply gorgeous. However the film is grainy so don’t compare this with any film that has been recently shot with the latest HDR cameras. Remember this movie is 40 years old. Nevertheless this is a beautiful restoration of a classic. The biggest problem is choosing which version to watch? Help is on hand in the settings menu. You can be informed which parts of the movie are different from the original theatrical release during the revamped version.
続きを読む
7人のお客様がこれが役に立ったと考えています
違反を報告
レビュー を日本語に翻訳する

D. MARTIN
5つ星のうち5.0 A very close encounter !
2020年8月3日に英国でレビュー済み
Amazonで購入
Close encounters is a film I first watched as a kid at the cinema and over the years I've watched all the different versions of it ,this 4k disc set sets the bar very high as you get all three versions of the film in 4k .the quality of the transfer is very good and as with many Spielberg films it has a bit of grain but nothing that's an issue all of the original film negative have been cleaned of any blemishes and the colour and tones are now better than they were when it was first at the cinema as for the sound it's Dolby Atmos so excellent all in all if your a fan of this film it's well worth the upgrade as both picture and sound are the best they've ever been .
続きを読む
5人のお客様がこれが役に立ったと考えています
違反を報告
レビュー を日本語に翻訳する

R. F. Stevens
5つ星のうち5.0 One for the SF Enthusiast's collection
2016年11月19日に英国でレビュー済み
Amazonで購入
The first time I saw this in the cinema the sound was awful and the number of people all around eating popcorn and crisps talking and slurping all through the film completely ruined it for me. What a mistake on my part.

But then I saw it on TV in the peace of home, and knew I had to buy the DVD, and fortunately in 2003 this was long enough after the initial release to be able to buy this two disc Collectors Edition with almost all the cut/restored/edited scenes somewhere in the package if not in the film itself, and here the film has the correct ending.

The surround sound is excellent (especially when turned up loud) and the imagery in the superb photography is captivating. The acting is excellent supporting the story brilliantly.

Blu-Ray version  now, because that offers even more in the way of extras and restored scenes with a genuine improvement in the picture quality.
続きを読む
10人のお客様がこれが役に立ったと考えています
違反を報告
レビュー を日本語に翻訳する

I first saw this many years ago, when I was far too young to appreciate the beautiful, majestic nature of this amazing film. It's something I had never got around to rewatching in my more advanced years (possibly because the ending and musical communication element has been parodied so much), and my word, what a cinematic treat I've been missing.
It really is terrific, and I can't believe it's been sitting on my shelf unopened for so long.
The story, revolving around numerous visitations by extraterrestrials, and the people who witness them, is well known, but it doesn't make it any the less compelling.
The fantastic slow build nature of the film is superbly handled, and it contains many amazing scenes. The plane discovery in the sandstorm, the police chase ,the mashed potato dinner, Barry's visitation, the nerve gas evacuation, the level crossing encounter. I could go on, but there are too many too mention here. By the time the (eye popping)ending rolled around, I was utterly fixated, and couldn't get over what I had just seen - quite simply one the best sci-fi films ever made.
Richard Dreyfuss has never been better, delivering a towering performance that often seems to tread a fine line between sanity and madness. He gets some of the best scenes, not to mention injecting some fine comedic moments. Garden renovation anyone?;) Interestingly, Steve McQueen was Spielberg's first choice for the role, but I can't imagine him giving the range of emotions required here.
Carey Guffey makes a huge impression here as the glassy eyed looking child, entering into the film's main plot in a major way. As with Henry Thomas and Drew Barrymore in E.T, Spielberg seems to have that Midas touch when getting the absolute best performance from child actors.
It has a wonderful score, by the master John Williams, who has a lot of fun with it, making it quite playful in key moments.
Then there's Steven Spielberg. I still think Jaws is his best movie, but this could be a close second. I was that impressed. He still churns out some great films, but his golden age was definitely the 70's/80's.
As a 1977 production, and of the sci-fi genre, it's barely dated at all. The effects hold up extremely well, and the film's quality script/acting /direction mean that this will continue to be something to be relished for movie goers in many years to come.

PQ 7.5/10 The overall quality is pretty impressive throughout, but there's a few scenes that are grain heavy. It's not a big criticism, as this is a 1977 film we are dealing with.

AQ 8.5/10 There's that score obviously, which sounds tremendous when channelled through a decent bit of kit, and the sci-fi content, especially the ufos arrival, that will put your subwoofer through it's paces.

Extras - I haven't watched any yet, other than checking out the extended ending on the Special Edition. There are all three versions of the film here, but after being blown away by the theatrical version so much, I'm a little loathe to potentially tarnish it by watching a lesser version.[/QUOTE]