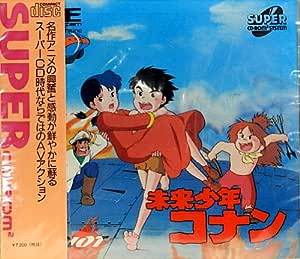 emperorIng360
5つ星のうち1.0 Colorful Cutscenes and Catchy Redbook Audio Can't Save You from its Many Design Flaws
2016年1月17日にアメリカ合衆国でレビュー済み
Amazonで購入
With Telenet and RIOT/Renovation, you are always going to be rolling the dice between getting something... flawed-but-good(ish), or terrible. Mirai Shounen Conan is unfortunately terrible.

Based off the popular Hayao Miyazaki serial, Mirai Shounen Conan boasts some nice-looking cutscenes and good redbook audio. The graphics look nice but are not spectacular. My favorite bit is how completing a chapter will show you a "TV spot" with the show title, as if you had just reached a commercial break.

However, playing the game reveals oversights, flaws, and frustration. Falling from a high-enough platform will lock Conan in a very-long "stunned" animation. The developers clearly thought this goofy face was so funny that no amount of button mashing or control will speed up this tedious punishment. This issue is further compounded by Conan's weak air momentum, slippery movement, and tendency to miss platforms you are jumping on. I certainly hope you don't miss a platform, fall down onto a collapsing platform, and get sent back to the beginning of the level, all thanks to watching that oh-so-hilarious stunned animation.

There are barely any enemies and no variety among them. You have green-jumpsuit-guy with a gun, green-jumpsuit-guy on a bike, and green-jumpsuit-guy on a mech... Later in the game you have people in miltary clothes with guns (who never fire their weapons), on hoverbikes, etc. There is almost a total lack of boss fights, with stages instead tasking you with reaching the end of their dull stretches. You have two attacks: a kick (in which you are invincible while performing - exploit this), and throwing spears (which are in no way stronger than the kick). On top of the ridiculous sight of Conan kick mech suits into oblivion, everything feels very half-baked and superficial.

Cutscenes, as I have said, look nice. however, in spoken cutscenes, there is no way I have found to skip them. This means if you lose your three lives in the later stages (which is a probably outcome given the less-than-stellar controls), you are sent BACK to the beginning of a stage, with no way to skip the long spoken- and text-cutscenes! Unacceptable! There is an options menu on pausing the game and press I or II that seems to... just change the color of your pause menu. I *think* the first option makes text scroll a little faster, but that doesn't forgive the lack of skipping cutscenes - other Telenet/RIOT games have this feature (Exile, Valis, and more); why not this one?

The above problem saps your desire to continue playing. If you miss platforms, fall to your death, and get a gameover, do you really want to slog through a bunch of text in a language you don't understand, with no way to speed up the process? Even if you could, what would you gain? Easier access to fight the same three enemies, navigate through brown and gray levels, just to see more cutscenes? Is it worth it? The answer is always: No.
続きを読む
役に立った
フィードバックを送信中...
フィードバックをお寄せいただきありがとうございます。
申し訳ありませんが、お客様の投票の記録に失敗しました。もう一度試してください。
違反を報告
レビュー を日本語に翻訳する