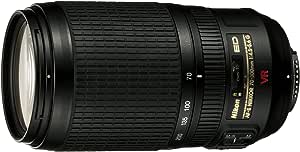 Shadow
5つ星のうち5.0 A Superb Lens !!
2014年12月25日に英国でレビュー済み
Amazonで購入
This purchase was for my daughter who wanted to up date from a pocket size camera to a DSLR to record the progress and changes in our new Grand-Daughter, I bought her a D3200 , for her birthday, I am a very keen amateur photographer myself and have just upgraded my seven year old D700 to a D810 and already have one of these lenses, my daughter thought she would like one, so I lent her mine to try, after a very short time she said she would like to have one of her own, hence this purchase, as a new one would cost more than the camera, and she was paying this time I suggested a good used one. My one was new when I bought it and still looks like new today after seven or so years of careful use. The only piece of equipment I have purchased used was a Nikon SB 900 flash gun, which was all complete in its original box and in like new condition. I suggested we look carefully, and for one complete with all parts both lens caps, lens hood, and pouch type case all in its original box, I feel that someone that has kept the box has more likely treated the lens carefully. The lens arrived and I tried it on my D810 it looked as good as my own one and performed perfectly, my daughter is very happy with this purchase. Now I must review this lens, before I started I decided to look at the existing reviews already written. I found it unbelievable of some reviews, particularly the person who had returned the lens claiming the rear lens cap was stuck, I presume it was fitted with a pattern cap rather than an original Nikon one, as my one is marked with an arrow and the word " open " in the clockwise direction, YES IT IS LEFT HAND Thread Bayonet. There is many more I could comment on but it would make this too long. The 70-300 is a superb lens I have had a lot of use from mine, the quality of prints from it are excellent and I frequently print at A3, I am an aircraft enthusiast and have taken some superb shots at air shows, of Spitfires, Hurricanes and Mustangs, I must admit photographing, "The Red Arrows" is a little more challenging, but I have worked out a focusing technique which gives me around 90% success. The auto focus locks quickly and quietly but I do not use auto for" The Reds", I will comment on another review, which annoyed me slightly, this person said that taking pictures of small birds in flight or birds perching a good distance away the lens was useless this is not the fault of the lens, he should have gone for at least a 500mm or got closer. I cannot fault this lens if it is used sensibly. I will just say if you are a Nikon user, I would not use any other than Nikon lenses for picture and build quality, you would not buy a Rolls Royce and put a Ford engine in it.
続きを読む
22人のお客様がこれが役に立ったと考えています
違反を報告
レビュー を日本語に翻訳する

wrinkled weasel
5つ星のうち5.0 Very happy with this
2017年10月6日に英国でレビュー済み
Amazonで購入
It took this on holiday to Italy and Switzerland recently, and it was worth its considerable weight. It works best outdoors at medium distances, capturing details of crowds, events and buildings, but also it is pretty good at portraits - it has to be far enough away from the subject, which tends to make sitters less self-conscious, I think.
My best outdoor results, using a Nikon D3200 body, are with a Hoya Pro1 Digital Circular polarising filter and for indoor portraits, a Tiffen Pro-Mist.

5つ星のうち5.0 Very happy with this
2017年10月6日に英国でレビュー済み
It took this on holiday to Italy and Switzerland recently, and it was worth its considerable weight. It works best outdoors at medium distances, capturing details of crowds, events and buildings, but also it is pretty good at portraits - it has to be far enough away from the subject, which tends to make sitters less self-conscious, I think.
My best outdoor results, using a Nikon D3200 body, are with a Hoya Pro1 Digital Circular polarising filter and for indoor portraits, a Tiffen Pro-Mist.

S. Aleppo
5つ星のうち5.0 Great Lens for the money
2014年6月19日に英国でレビュー済み
Amazonで購入
I haven't got the experience to rate this lens from a professional photographers eye, but for me, what it does is extremely good and for the money it is an absolute steal. Like all moderately priced big zooms I can confirm what other reviewers have said about the drop off in sharpness at the extreme end, but seriously, what do you expect for a lens aimed at and priced at the keen amateur end of the market? Because I'm especially keen on wildlife and candid people shots I tend to leave the lens on the camera all the time and switch to my lesser used 18-105mm for everything else. It is extremely heavy and feels very solid. Coupled with the weight of my D7000 I could never forget I'm carrying it. Only once have I missed a shot when the camera would not autofocus on a fairly dull day as a spitfire passed on its way to an air show. The grey body against the grey sky with rubbish light was a little too much for it and I couldn't fire one shot off. That minor disappointment aside, it is a great piece of glass. The pro version(2.8 hole) will set you back a thousand pounds and more and I really can't justify that kind of outlay for what I do with a camera. Ultimately I would say it is well worth the money and so long as you don't try to shoot in adverse conditions it will do what you ask of it. VR Stability works very well and I leave it on all the time. I have not tried the VR panning setting yet as I tend not to do this and so it stays in full control.
続きを読む
4人のお客様がこれが役に立ったと考えています
違反を報告
レビュー を日本語に翻訳する

Kindle Customer
5つ星のうち4.0 a good product
2014年12月7日に英国でレビュー済み
Amazonで購入
Always been a bit sceptical when buying second hand of off the net. Checked out the reviews of this company and seemed to be quite good, with a lot giving five stars. The item I purchased was a Nikon AF-S VR 70-300 f/4.5-5.6G IF-ED lens. Arrived one day earlier then informed of and in good solid packaging. Item was as described with all other items, lens hood etc included. I gave it a 100% close check over and I mean close. Used a magnifier and light. Lens body and barrel was as new with no physcical signs of wear or damage. However upon close examination of the front lens element, I did notice a very small scratch close to the edge. I attached the lens to my camera and it functioned perfectly. Took several pictures and then examined these using Photoshop 11. Was unable to notice the scratch. Weather was overcast though, so will take some more in brighter weather and again examin them.

Besides this slight scratch everything seems to be ok. That was the only reason I gave it a four. It goes to show that putting a UV filter on the front is a good idea for any lens.
続きを読む
3人のお客様がこれが役に立ったと考えています
違反を報告
レビュー を日本語に翻訳する

davesaat
5つ星のうち5.0 Perfect zoom lens to pair with 18-135mm kit lens
2014年12月3日に英国でレビュー済み
Amazonで購入
A high quality zoom lens, which works with all Nikon F-mount cameras (digital or film SLRs), both DX and full-frame. This is definitely the zoom lens to get if you already have an 18-135 kit lens, especially as the filter size is the same 67mm and the extra 165mm makes all the difference if you like shooting from a distance and cannot get any nearer (e.g. from one side of a lake to the middle). Yes, the lens is heavy, but it has a metal mount. It also has a lovely smooth zoom and a manual autofocus automatic override that does not require a switch. Worked flawlessly 1st time with my D80. In conjunction with a 35mm prime, I've found that i'm no longer needing my kit lens.
続きを読む
2人のお客様がこれが役に立ったと考えています
違反を報告
レビュー を日本語に翻訳する
すべてのレビューを参照します
同様の商品をご覧になりませんか？ こちらのリンクで参照ください。300mm、nikon 中古 レンズ、nikon lense、レビュー高評価商品 カメラ用交換レンズ、レビュー高評価商品 交換レンズ、vr カメラ
トップへ戻る
Amazonについて
Amazonでビジネス
Amazonでのお支払い
ヘルプ＆ガイド
日本語ショッピングのための言語を選択します。 日本ショッピングのための国/地域を選択します。
© 1996-2020, Amazon.com, Inc. or its affiliates