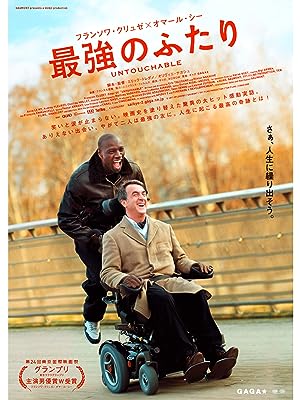 wolfie
5つ星のうち5.0 One of the best
2017年4月27日に英国でレビュー済み
Amazonで購入
This is probably one of my favourite films of all time. It is funny. poignant, extremely well acted and the translation is very good. I have sent it to a few friends as a present, and they all loved it. It is well worth watching more than once, as you see new things every time. Fantastic, especially bearing in mind it is based on a true story..
続きを読む
14人のお客様がこれが役に立ったと考えています
違反を報告
レビュー を日本語に翻訳する

Malvolio O
5つ星のうち5.0 Human and Humane Brilliance
2016年9月12日に英国でレビュー済み
Amazonで購入
It has moved on since my day. When I did A Level German we just had set books. This week my daughter started sixth form college and has a set film in French and another in German. "Untouchable" is the French set film and after watching the German set film "The Lives of Others" she was a bit worried.

What a delight. Human and humane with beautifully crafted humour and relationships. For once a film that really treats people with disabilities as real people instead of a campaign tool. Fine performances all round.

But how did the British critics get it so wrong when the film was first released. Then they said it was a poor derivative of "Driving Miss Daisy". After becoming one of the top French films world wide and winning awards everywhere but Britain I notice from the cover of the Blu-ray that they are all now extolling its virtues. Well repentance is a good thing.

Computer user
5つ星のうち5.0 Modern French cinema at its best.
2016年7月3日に英国でレビュー済み
Amazonで購入
Apparently the second highest grossing French film of all time after Bienvenue chez les Ch'tis, this French comedy-drama, loosely based on a true story, is heart-warming, thought-provoking, funny and engrossing. Philippe (François Cluzet) is an immensely wealthy quadriplegic who hires Driss (Omar Sy) as his live-in carer. I won't say more than that in order not to spoil the story. The film received some criticism in the US, as Driss was viewed by some US reviewers as an Uncle Tom character. I personally believe this is because of the cultural difference between the two sides of the Pond, as I don't believe Europeans see Driss as an Uncle Tom at all. The film has pathos but also humour, and genuinely makes us think about the social and economic divide, and, yes, about prejudice too. If you don't mind subtitles, then do yourself a favour and watch this film.
続きを読む
4人のお客様がこれが役に立ったと考えています
違反を報告
レビュー を日本語に翻訳する

Having seen François Cluzet in some very good films, I was keen to see him in Untouchable, though I did have some reservations as to whether the film would live up to the hype - "THE WORLD'S No 1 AWARD WINNING COMEDY" etc, and also whether I would indeed, like the comedy portrayed in the film, comedy being the subjective thing that it is.

As for the comedy, well yes I did find it very funny, though at the same time this is also a serious film with a serious story. The comedic aspect of the film is very realistic - it, is not slapstick or farce, it is intelligent and it is done with great talent from the actors and with great writing and directing.

My interest in watching the film was initially because François Cluzot was in it. Cluzet was exceptional, but I was equally impressed (if not more so) by Omar Sy who gave a remarkable performance throughout. That would also be true of the supporting cast and everyone that worked on the film, as they seem to have done and excellent job.

The film is based on a true story (you are informed as the film starts) and that certainly seems to add to the enjoyment of it. I would say that all aspects of the film are without fault, as it has great acting, writing, directing, costumes, music etc - and cinematography. There are some particularly amazing scenes for which the camera-work should have special praise.

So did the film live up to the hype? Well for me it certainly did. This is one of the best films I have seen for some time.

At the time of writing this review, there are thirteen reviewers on amazon who have awarded it one star, so it obviously isn't for everyone. Most of the one star reviewers seem to be saying they didn't realise that this French film was in French and that they would have to read English subtitles. So perhaps this is not recommended viewing for anyone who dislikes subtitles, but even if you are put off by subtitles this might be the film to make you change your mind.

So to sum up: an outstanding film, brilliant story, brilliantly told, brilliant acting (especially Omar Sy), some outstanding photography and just maybe a film that some subtitle haters might enjoy.

On the DVD you get:

Keiran McAllister
5つ星のうち5.0 Good entertainment.
2017年2月4日に英国でレビュー済み
Amazonで購入
Not very often does a film provide such enjoyment.
Funny and interesting, well acted and a believable storyline.
I came to this film having never heard of it and leave with it as one of my favourites.
I will watch this film again in the future and I can't say that for too many.
If you are reading reviews uncertain whether to indulge the expense, have no fear I do believe there is something in this film to satisfy most people.
続きを読む
3人のお客様がこれが役に立ったと考えています
違反を報告
レビュー を日本語に翻訳する
すべてのレビューを参照します
トップへ戻る
Amazonについて
Amazonでビジネス
Amazonでのお支払い
ヘルプ＆ガイド
日本語ショッピングのための言語を選択します。 日本ショッピングのための国/地域を選択します。
© 1996-2020, Amazon.com, Inc. or its affiliates