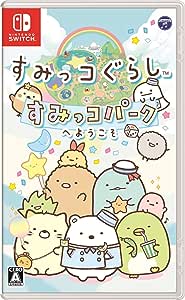 The Fox
5つ星のうち4.0 Marshmallow Peeps hijack Mario Party
2018年1月17日にアメリカ合衆国でレビュー済み
エディション: ソフトのみAmazonで購入
I like party/mini games more than any adult should, but on the Switch, what should a lover of mini-games do? So far there's no announcements for Mario Party, (normal) Rabbids games, and there's not going to be Mario & Sonics at the 2018 Olympics. And 1-2-Switch was barely a game and forgot the party. So I looked at what Japan has to offer and this game looked kind of like Mario Party. I'll admit, this was a long shot.

So in this game you control one of four mutated marshmallow peeps wandering around an amusement park collecting coins which you can spend to pimp out the hamster cage. You can also buy clothing to play dress up with your marshmallow peeps. And as far as gameplay, it isn't kind of like Mario Party, it plays EXACTLY like Mario Party 10. You roll dice, the board has a similar set up, the spaces you land on have the same kind of events, and the mini-games would fit right in with a Mario Party game. It even has those totally unfair prizes at the end of the game some a player that was a total looser can still pull of an undeserved win. I'd say the biggest difference is that this game doesn't have the ridiculous and unfair elements that Mario Party is infamous for. There's no Monster that will take half your coins, or spaces that resets everyone's score. In Mario Party, you could be winning by a large margin and one round later, you're in last place. In Sumikko Gurashi, if you have a decent lead, you probably will win.

As far as the game being in Japanese, there is a fair amount of text on screen, but it's easy to figure out what's going on. This is a kids game after all. It takes a little trial and error to figure out what's all in the menu and a few mini-games are a little hard to figure out without being able to read the instructions, but for the most problem, language wasn't a problem. As far as difficulty, I wouldn't say it's a hard game, but some of the mini-games are challenging, a few just confusing, and there's enough luck involved that I only win the game about half the time.

So finally, how did this measure up? If you can stomach the super-kuwai marshmallow peep party, it's actually a pretty good alternative to Mario Party. I think it's rather fun although it is a little light on content. There are only four boards, and I don't know how many mini-games there are, but from my experience so far, I'm going to guess a little less than in a Mario Party game. If there were other mini-game collections being released in America, I'd say this may not justify import prices. But if you really want this style of game and you're willing to shell out some cash, this is a decent option.

April
5つ星のうち5.0 Adorable, fun, and low stress
2018年7月1日にアメリカ合衆国でレビュー済み
エディション: ソフトのみAmazonで購入
While this game is all in Japanese, it’s very easy to play and understand, especially if you have any experience with the Mario Party games. This is honestly my favorite game for the Switch at the moment because it’s adorable, simple, fun, and great for stress relief/escapism into a cute alternate reality of happiness and rainbows. My husband also loves this game and we find ourselves laughing every time we play.

I love that we can play together (without arguments even!) and that in spite of the cute characters and deceptively easy mini game controls, we don’t win every game. When I’m tired and mentally exhausted from a long week at work, this is the game I reach for.

For Sumikko Gurashi fans with a Switch, this is your game. For anyone else who loves party games or characters so cute you could die, this is also for you.

For those looking for a strategy, challenging, or competitIve game...this is probably not what you’re looking for.
続きを読む
10人のお客様がこれが役に立ったと考えています
違反を報告
レビュー を日本語に翻訳する

Amazon Customer
5つ星のうち5.0 Great
2020年6月23日にアメリカ合衆国でレビュー済み
エディション: ソフトのみAmazonで購入
Exactly what the listing said! One sad thing is that you can’t collect the Nintendo points if your console doesn’t have Japan set as it’s region (you can’t just change it then change it back I tried lol).

I do have to say the game itself is wayyy over priced. Should have been maybe 40$ pushing it because of the brand. Don’t get me wrong it is fun but lack luster. I’d watch a few game plays before you buy it. Oh and the directions where really easy, if I wanted an exact translation I pulled out a translator app.
続きを読む
違反を報告
レビュー を日本語に翻訳する
すべてのレビューを参照します
同様の商品をご覧になりませんか？ こちらのリンクで参照ください。すみっこぐらし、スーパーマリオ オデッセイ、switch ゲームソフト
Amazonプライム会員ならお急ぎ便、日時指定便が使い放題
さらに、映画もTV番組も見放題。200万曲が聴き放題 。クラウドに好きなだけ写真も保存可能。
> プライムを無料で試す