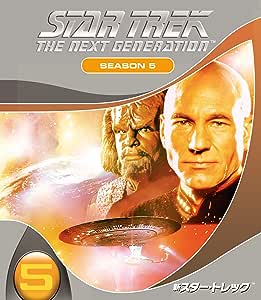 Nicholas Casley
5つ星のうち4.0 Q-Less but Good
2015年5月30日に英国でレビュー済み
Amazonで購入
I suppose season five (1991-92) is best known for the return of Leonard Nimoy in the two-parter ‘Unification’ (both parts one and two appear in this set). Denise Crosby appears in the second part. But, as is often the case with the two-parters, the story’s build up is met by a disappointing denouement.

Season five actually opens with the second part of ‘Redemption’, which again witnesses the re-appearance of Denise Crosby – and, incidentally, sees Data get his first independent command (in another episode – ‘Disaster’ – Lieutenant Commander Troi is in charge, whilst in ‘Conundrum’ Worf is in charge and giving order to Picard.),

As well as the return of Nimoy and Crosby, another returnee to the series in this season is Will Wheaton in ‘The Game’ and ‘The First Duty’. Lwaxana Troi (Majel Barratt) makes another unforgettable appearance. Meanwhile, a new member of the crew who appears in a large number of episodes is Ensign Ro (Michelle Forbes), and Brian Bonsall plays Worf’s son in more than one episode. One ‘man’ who is notable by his absence in season five is, alas, Q.

Other points in this season worthy of remark is to see Picard wearing in more than one episode a blue sweater and red bomber jacket; one episode (‘Hero Worship’) is directed by Patrick Stewart; Patrick’s son Daniel appears in ‘The Inner Light’; Kelsey Grammer makes a fleeting appearance (‘Cause & Effect’); and we meet ‘Hugh’ of the Borg. The season ends with another two-parter that introduces Mark Twain (‘Time’s Arrow’).

Alongside the usual sci-fi storylines, three cheers are due to the series also bravely attempting to comment on contemporaneous social issues. Interesting and contentious subjects covered in this season include addiction to computer games (in ‘The Game’); the attempted rape of Troi (‘Violations’); voluntary euthanasia (in Ethics’); and androgyny as a metaphor for homosexuality – the US TV public would only go so far! – in ‘The Outcast’.

Indeed, this season is notable for some fine writing. Even ‘Imaginary Friend’, which on the face of things presents an awful scenario (a kid with an imaginary friend), is well-written and performed. ‘Inner Light’ is another favourite of mine, where Picard lives a lifetime on another planet in the matter of minutes on the Enterprise. But for me, the best episode (and arguably the best of all TNG seasons) is ‘Darmok’, a clever instalment that sees Picard embark on a virtually one-to-one relationship with an alien, with whom he can communicate only in metaphor. (Michael Piller also singled this episode out for praise.)

The extras in this box set follow the same pattern as before. These largely comprise a series of twenty-minute ‘Mission Overviews’ recorded in 2002, featuring comments by a wide range of participators: actors, writers, producers, technical crew, etc. Memorable missions are revisited. But in addition season six witnessed the death of Gene Roddenberry, and the extras include a thirty-minute tribute.

John Picard
5つ星のうち5.0 More worlds to explore...
2013年11月28日に英国でレビュー済み
Amazonで購入
This is yet another quality season from the TNG crew. The episodes look fabulous in HD, making the experience even more memorable - like watching the show all over again for the first time. It brings life into this imaginative and intelligent series, the clever stories are given more reality than ever before.

This season includes a fantastic season opener, "Redemption, Part 2." Another favorite of mine is "The Game", a highly underrated episode about the crew being controlled by an addictive and dangerous game, reminded me of a brilliant TOS "possessed" episode. I have always loved "Conundrum" too, as it was the first TNG episode I had ever watched when I was a young boy with my Grandad, who introduced me to this timeless show. "Darmok" and "The Inner Light" are fan favorites. There not my absolute classics, but I still like them. "Cause and Effect" is intriguing, written by fantastic TNG writer Brannon Braga, even though it does get annoying after a while (watch the episode and see what I mean.) "The First Duty" is perhaps my favorite of the season though, a really good episode about morals and doing the right thing, love it.

Season 5 is another top-notch delivery from the Enterprise: picture, packaging of the box and story power is all there - bring on season 6!

Mr. K. J. Leonard
5つ星のうち5.0 fantastic audio and video reproduction
2018年3月17日に英国でレビュー済み
Amazonで購入
No need to add anything regarding the show and episodes, all Trekkies being familiar with it and them, needless to say another strong season.
As for the product itself, fantastic audio and video reproduction. Highly recommended for all Star Trek fans to upgrade from the DVDs, well worth the cash.
Only slightly negative thoughts I can add are the lack of a booklet and episode listing/detail etc. The details being wrote on the inner side of the case covers, and bit of a pain to see them easily.
続きを読む
役に立った
フィードバックを送信中...
フィードバックをお寄せいただきありがとうございます。
申し訳ありませんが、お客様の投票の記録に失敗しました。もう一度試してください。
違反を報告
レビュー を日本語に翻訳する

movieviewer
5つ星のうち5.0 This is the best version of this series
2014年7月18日に英国でレビュー済み
Amazonで購入
This is the best version of this series. You already know if your a fan of TNG, if you own a hd tv and blu ray you owe it to yourself to get this. Is it only for fans? No, but you should purchase series 1 to 4 first. You at least need season 4 because this season opens with the second part of a two-part story.
続きを読む
役に立った
フィードバックを送信中...
フィードバックをお寄せいただきありがとうございます。
申し訳ありませんが、お客様の投票の記録に失敗しました。もう一度試してください。
違反を報告
レビュー を日本語に翻訳する
その他の国際レビューを読み込む

Lapford Lass
5つ星のうち5.0 Great Season
2015年6月17日に英国でレビュー済み
Amazonで購入
It's been so long since I'd watched any of these episodes that I'd forgotten how excellent some of them are! Trying to gradually turn my VHS collection into DVDs is taking time but I'm so glad I got this season of TNG as there are some truly cracking episodes - worth the purchase just for Darmok and Disaster alone!
続きを読む
役に立った
フィードバックを送信中...
フィードバックをお寄せいただきありがとうございます。
申し訳ありませんが、お客様の投票の記録に失敗しました。もう一度試してください。
違反を報告
レビュー を日本語に翻訳する

The Crumudgeon
5つ星のうち5.0 These Star Trek NG Blu Rays are superb
2013年12月19日に英国でレビュー済み
Amazonで購入
One can say what one will, the Next Generation shows are better than the original Star Trek. The production values are higher, the stories are better written and generally a bit more complex and the acting is certainly more subtile. The fifth year is, I believe, the apex of Next Generation shows.

DaveH
5つ星のうち5.0 The Inner Light is the best Star Trek episode ever. true
2015年11月20日に英国でレビュー済み
Amazonで購入
took a while to arrive but worth the wait. I only bought it for the episode called The Inner Light which I saw years ago - it was even better than I remembered.
続きを読む
役に立った
フィードバックを送信中...
フィードバックをお寄せいただきありがとうございます。
申し訳ありませんが、お客様の投票の記録に失敗しました。もう一度試してください。
違反を報告
レビュー を日本語に翻訳する