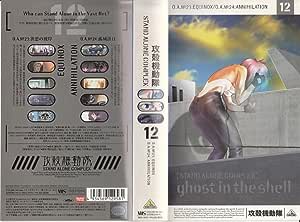 Made in DNA
5つ星のうち5.0 Ghost in the Shell TV series #12
2003年11月19日に日本でレビュー済み
It is 2030 and in an alternate universe where Motoko Kusanagi never met the Puppet Master, she still lives and operates as the lead agent in Public Safety Section 9, a special armed mobile government unit dealing in cyber crimes.
This DVD contains two full-length missions -- the episodes "Equinox" and "Annihilation". Rejoin the familiar cast from the original movie and meet the new faces of the Kouan Kyuuka (Section 9). In Equinox, the "Warai Otoko" reveals himself to the team and asks an old acquaintance to keep a promise. In Annihilation, Section 9 is sacrificed by the powers that be in order to expose corrupt government officials and the Warai Otoko Jiken. But just how far will Section 9 need to fall before the government is satisfied?
Set to a fantastic soundtrack by legendary composer and songwriter Yoko Kanno as she teams up with Tim Jensen (of Seatbelts fame) on "lithium flower", the ending theme song-cum-tribute to everyone's favorite cyborg Motoko, and Origa and Shanti Snyder for the opening theme "Inner Universe". Reaching back to her Macross Plus days, it is a fusion of techno, rock, and traditional Japanese music. Includes a special laminated character card.
Filmed in widescreen, 16:9 format. In the original Japanese language only. Approximately 60 minutes.
続きを読む
9人のお客様がこれが役に立ったと考えています
役に立った
コメント 違反を報告
レビュー を日本語に翻訳する