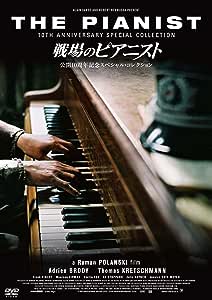 sam the eagle
5つ星のうち5.0 Great film, of a disturbing era.
2019年2月17日に英国でレビュー済み
Amazonで購入
The pianist is a true story, difficult to watch knowing it really happened, like all movies about the destruction of the jews by the nazi,s it is horrific to watch, it is difficult to understand the reasons why this happened and it makes me feel vulnerable to what the human race is capable of doing. a lot of it was filmed in warsaw, in the praga district which gives it an authentic feel, some of it was shot at one particular part of warsaw old town which was actually rebuilt after the war. the acting is great and the director seemed to have learned a lot from the great polish director andrej wajda who was fantastic at making films about the war from a polish perspective.
続きを読む
1人のお客様がこれが役に立ったと考えています
違反を報告
レビュー を日本語に翻訳する

doris
5つ星のうち5.0 Stunning in every way
2015年11月26日に英国でレビュー済み
Amazonで購入
Biopic - 2002 Academy Award-winning and Golden Globe-nominated film starring Adrien Brody (who won the Academy Award for Best Actor for his role as "Władysław Szpilman" in this film). his is a monumental film in so many ways and here is the Wikipedia review that sums it up -
https://en.wikipedia.org/wiki/The_Pianist_(2002_film).

And for Music lovers it is especially poignant with two memorable scenes for pianists, not least the occasion when Szpilman is hiding in a room with a piano he dare not play (torture) and the other where he has to play for a Nazi Officer.

The sound track for this film is also outstanding and for Chopin lovers in particular, it won't disappoint. In 2003, the music won the César Award for Best Music Written for a Film, and was also nominated for the BAFTA Award for Best Film Music.

The Chopin pieces are played by Polish pianist Janusz Olejniczak and the original score piece was composed by Wojciech Kilar. The music in the actual movie also includes pieces by Beethoven and Bach.

Clifford W. Donnelly
5つ星のうち5.0 Thought Provoking
2017年12月6日に英国でレビュー済み
Amazonで購入
A great movie which makes you think.
It shows what human kind is capable of doing if the conditions are right.
The Holocaust has been the subject of many films but, this one comes at it from a completely different angle.
I won't spoil the film for you by talking about the film's plot. I will just say that this is a must see film.

Mrs. D. Surrey
5つ星のうち5.0 ONE OF THE MOST MOVING FILMS I HAVE EVER SEEN.
2011年7月13日に英国でレビュー済み
Amazonで購入
I never thought I would ever see such a wonderful film again,as there is so many disappointing films around that have received good reviews.This would appeal to anyone who is sensitive,musical and compassionate by nature ~~ as we see the Jewish families stripped of everything they have and hold dear to their hearts,their family life destroyed,their homes taken away,and then herded into walled in ghettos to die of starvation and disease.Many are transported to the death camps in trains,thrown in to the carriages as if they were rabid animals..
The story begins with the full horror of the Nazi takeover in Warsaw."Oh Warsaw,what did they do to you?" ~~ the City of endless tears!!
I still cannot fathom out why intelligent and cultured German people joined the Nazi regime in their droves.What power Hitler had over the Germans is impossible for me,after all these years,to grasp and come to terms with.How could anyone with an ounce of human compassion stand aside and watch the mass cruelty without even trying to stop it?I would have preferred to die with the Jews.
I will not spoil the story anymore for prospective buyers,but I can promise the ones that do buy this,you will not be disappointed and you will want to see the film again and again.Just as a good book can be read many times and still hold the interest then so with this masterpiece.
続きを読む
5人のお客様がこれが役に立ったと考えています
違反を報告
レビュー を日本語に翻訳する
すべてのレビューを参照します
Amazonプライム会員ならお急ぎ便、日時指定便が使い放題
さらに、映画もTV番組も見放題。200万曲が聴き放題 。クラウドに好きなだけ写真も保存可能。
> プライムを無料で試す