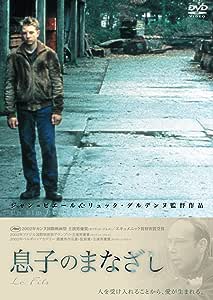 andy
5つ星のうち5.0 Brilliance once again from Jean-Pierre and Luc Dardenne
2017年3月28日に英国でレビュー済み
Amazonで購入
There should be no spoilers in this review.

Superb film and one that I would highly recommend.

If the viewer knows in advance something that is about to happen or is to be revealed, or knows the premise of a film, I think that that knowledge can often lessen the enjoyment of a film. But with “The Son” that knowledge is not quite the spoiler that it might be, and I feel that when I watch this film subsequently that knowing what is at the heart of this film will not detract from enjoying it, but just the same I will avoid giving any detail about the film or what is its premise.

But I will say that this is a superb film once again from Jean-Pierre and Luc Dardenne. I have more or less watched their films in a reverse chronological order since I first watched Cecile de France in “The Kid with a Bike”, and as always after watching one of their films, I am still thinking about “The Son” long after watching it whilst writing about it in this review.

Whilst the films of the Dardenne brother will not be to everyone’s taste, anyone who appreciates realistic cinema that doesn’t rely on computerised imagery etc should appreciate “The Son” and their (the Dardennes’s) work in general. If you’ve ever enjoyed another of their films then you should not go wrong with “The Son”,

In the extra features that came with this DVD, in two separate interviews, Jean-Pierre and Luc Dardenne, and Oliver Gourmet talk about their involvment in the making of this film and about their approach to what is involved for them in work in gerneral, and they are worth looking at once (if) the film has been watched.

Olivier Goumet in the lead role is a much more experienced actor than his “co-star” in “The Son”. Gourmet won the Best Actor Award at Cannes for his performance whilst Morgan Marinne – Gourmet’s co-star was nominated for Most Promising Actor (Meilleur jeune espoir masculin) at the César Awards.

This review is for the two disc DVD version – there might be other disc options available.

On the DVD’s you get:

London
5つ星のうち5.0 Very Good Film
2013年2月18日に英国でレビュー済み
Amazonで購入
A very good film about a man who teaches in a rehabilitation centre for released youth crime convicts - who realises that he knows the history of one new lad who joins. It deals with the issues of revenge and coming to terms with issues.
続きを読む
違反を報告
レビュー を日本語に翻訳する

Peter Bowes
5つ星のうち5.0 Very Good
2013年3月6日に英国でレビュー済み
Amazonで購入
Im not an expert on French films but this was a very compelling film, I love it.

Very well made with that excellent less is more French film making.

peter mackie burns
5つ星のうち5.0 sublime
2012年11月5日に英国でレビュー済み
Amazonで購入
The Dardenne Brothers are masters of their craft. This film is amongst their greatest work and gets better with repeated viewing. If you like films that resonate and stay with you then this is a film you must watch. If you are at all unsure about purchasing this film then google Roger Eberts review of The Son. Sublime. Highly recommended.
続きを読む
違反を報告
レビュー を日本語に翻訳する
すべてのレビューを参照します
Amazonプライム会員ならお急ぎ便、日時指定便が使い放題
さらに、映画もTV番組も見放題。200万曲が聴き放題 。クラウドに好きなだけ写真も保存可能。
> プライムを無料で試す