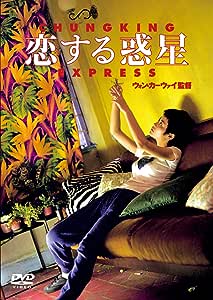 LeBrit
5つ星のうち5.0 Wildly crazy and entertaining movie
2015年1月23日に英国でレビュー済み
Amazonで購入
This film is great entertainment and not at all predictable. It is also humorous and lovable and whereas I feel it falls short of what most film buff would regard as a great film, it is great nevertheless as how otherwise might you rate a film that entertains you, surprises you, charms you and makes you want to watch it twice, three times and so on. It's pointless attempting to describe the the plot/s. It's a bit silly on occasions but I wouldn't let that hold you back as it achieves this with great enchantment. Okay so it is not Fellini or Antonioni but it will nevertheless entertain the pants off you and as well, there is some quite brilliant camera work. There is some tongue in cheek acting in the same manner as perhaps Pulp Fiction; but as in that film the acting, tongue in cheek as it might be is also quite brilliant within its format. Faye Wong is a charming actress as Tony Leung is a perfect match for her and that's just one of the two stories. Hey, it's not serious stuff. It should make you laugh and maybe shed a tear or two. Personally I believe you should just buy it and watch it and write a review of it from another aspect from what I have. I doubt whether you will be disappointed whatever level you take from it? Unless you like serious Art movies (and then you 'might' like it) or a Hollywood Blockbuster fanatic which gratefully I have a brain and so therefore thankfully Iam not.
続きを読む
2人のお客様がこれが役に立ったと考えています
違反を報告
レビュー を日本語に翻訳する

Filmfan
5つ星のうち5.0 Sublime
2015年12月29日に英国でレビュー済み
Amazonで購入
Said to be Quentin Tarantino's favourite film for many years... A joyful reinvention of the French New Wave, this time with music added. Was intended to be three short stories and shot as an interlude to a movie with which he was having difficulties. He only managed two stories before running out of juice and time.. It's the second story that lights the blue touchpaper. The incomparable genius of Chris Doyle's camerawork and WKW's direction soar above most plodding explorations of love and indeed, most other inventions of recent cinematic storytelling. The best combination since Godard and Coutard? Sublime.
続きを読む
1人のお客様がこれが役に立ったと考えています
違反を報告
レビュー を日本語に翻訳する

Elleppi
5つ星のうち5.0 A unique film, maybe Wong Kar Wai best one
2015年8月29日に英国でレビュー済み
Amazonで購入
To me this is still best Wong Kar Wai film. And one the earliest. It is the film that made me meet this director. At that time it represented a refreshing and really uncommon way to make films, reminding of french nouvelle vague and music videos, but with a true inspiration where characters are genuine altough bizarre, and the storytelling style just makes us slip into this unusual world and view of life that represents almost a poetic reaction to the oppressive and asfittic city life in big cities like Hong Kong. Here everything is original and new, even the structure, since the film is made of 2 episodes that in a way tell two similar stories but from opposite points of view: male and female. Cinematically challenging and surprising, This film is an unstoppable yet intimate and poetic look at a author, who will soon become one of world renowned masters of cinema
続きを読む
1人のお客様がこれが役に立ったと考えています
違反を報告
レビュー を日本語に翻訳する

Shaz
5つ星のうち5.0 Amazing film
2020年12月14日に英国でレビュー済み
Amazonで購入
If you are into the work of Christopher Doyle and Wong kar-wai I would highly recommend, quirky, fun, with highly artistic filming
続きを読む
違反を報告
レビュー を日本語に翻訳する

Brendan
5つ星のうち2.0 Apparently Dodgy English Subtitles
2017年3月18日に英国でレビュー済み
Amazonで購入
Looked good but the English subtitles didn't seem right. I don't speak enough Cantonese to know for sure but enough Mandarin to have a good hunch. However, when Bridgette Lin said in English at 6:08, "Give me your passport" and the subtitle came up, "Give them some beers", I decided my hunch must be right and turned it off. Now shopping for another one - the Artificial Eye version seems to be the one.
続きを読む
3人のお客様がこれが役に立ったと考えています
違反を報告
レビュー を日本語に翻訳する
すべてのレビューを参照します
Amazonプライム会員ならお急ぎ便、日時指定便が使い放題
さらに、映画もTV番組も見放題。200万曲が聴き放題 。クラウドに好きなだけ写真も保存可能。
> プライムを無料で試す