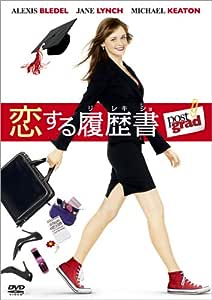 Mr. D Burin
5つ星のうち2.0 Post-student life...
2012年1月11日に英国でレビュー済み
Amazonで購入
Contrary to some reviews, 'Post Grad' is by no means a terrible film. In fact, it has the potential to be rather a good one. Alexis Bledel puts in a characteristically strong performance as Ryden Malby, a young woman torn between dreams of her perfect job at a publishing company, the interests of a handsome neighbour, and the companionship of her childhood friend, Adam (Zach Gilford). Factor in the well-handled tender moments between Ryden and Adam, and there's all the makings of an interesting, moving film. Unfortunately 'Post Grad' never achieves the right balance. The film moves around far too fast, moving between tense, emotional scenes and daft family happenings, in a way that makes the film feel jerky and awkward. Things in 'Post Grad' never have the chance to settle or develop like they could do, before the tone is shifted; usually to some improbable scenario involving Ryden's rather annoying father. The film's zipping pace also means that none of the film's central issues really get the time they deserve. The twists and turns in Ryden and Adam's relationship are rushed over, and due to this, it's hard to really engage with either character, or their relationships. Equally, 'Post Grad''s comedic side leaves rather a lot to be desired. Gone is the nicely understated touch of Ryden's more personal moments, and instead the viewer is left with cats being run over, characters stepping in poo, and other such formulaic 'comedy'. For fans of Alexis Bledel, her performance here will make 'Post Grad' worth a watch, and in honesty, there are far worse films to pass the time with; it's just a shame 'Post Grad' didn't have some smarter jokes, a bit more time on developing its plot and characters, and a few less stereotypically 'batty' relatives breaking up the plot. Otherwise, I imagine I'd be sitting here giving it 3 or 4 stars.
続きを読む
11人のお客様がこれが役に立ったと考えています
違反を報告
レビュー を日本語に翻訳する

Vp84
5つ星のうち4.0 Good fun film
2010年10月8日に英国でレビュー済み
Amazonで購入
I got this film because I love Gilmore Girls and wanted to watch it because "Rory" (Alexis Bledel) is in it. It's not the best film, but it is good fun to just switch off and not have to think about anything for a while.
Alexis' chracter is relatble as she is going through a situation many gradutes are and for the most part is likeable, other than at times her treatment of her friend who is clearly in love with her.
It is somewhat predictable, but tthen again most films these days are. There was a bit near the end that I didn't see coming suprised and annoyed me, but other than this I thought it was a good film.
続きを読む
6人のお客様がこれが役に立ったと考えています
違反を報告
レビュー を日本語に翻訳する

Stephanie Burgess
5つ星のうち4.0 A really good film
2013年7月24日に英国でレビュー済み
Amazonで購入
A film completely relevant to this day and age. Not being able to get the perfect job straight after university sound familiar? Well this film shows you the emotional side of that, and different ways to combat it. Ultimately it teaches you to never give up, and to not give up on family and friends too. And to use all the resources you have. A highly recommended film.
続きを読む
2人のお客様がこれが役に立ったと考えています
違反を報告
レビュー を日本語に翻訳する

BarryManilowCouldItBeMagicAtLast
5つ星のうち4.0 funny
2014年4月16日に英国でレビュー済み
Amazonで購入
It's a movie for all the family.I bought it because I like the cast especially Michael keaton and Jane Lynch.They can play very different kind of characters.It 's a family a little crazy but very funny too.Enjoy yourself watching it.
続きを読む
違反を報告
レビュー を日本語に翻訳する