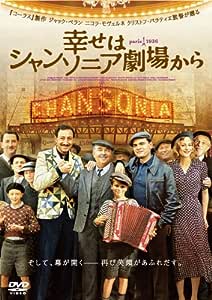 PIERRE RADULESCU-BANU
5つ星のうち4.0 Recreating an Epoch
2016年3月24日にアメリカ合衆国でレビュー済み
Amazonで購入
Several years ago I had the occasion to watch Les Choristes and it anointed my soul. I was curious to see also other movies of director Christophe Barratier, and so I came on Faubourg 36 (known also as Paris 36): not only the same director, also the same leading actor (Gérard Jugnot). It has a different approach than Les Choristes, while communicating the same French charm. Better said, the charm of the French movies made before the arrival of La Nouvelle Vague.

Let me explain. The plot in Les Choristes had a crystal clear consistency. A music teacher was coming to a school and was struggling to make a choir against all odds. Eventually he was succeeding. Here in Faubourg 36 the plot is rather a pretext. Actually we have several micro-plots evolving in parallel, loosely connected. The aim is to recreate through these micro-plots (each one without the pretention to be taken too seriously, more like some kind of tableaux vivants) the atmosphere of the epoch of the Front Populaire, the Paris of 1936. It is a faubourg at the outskirts of the city, people live in misery, now things will begin to change, with the arrival of the leftists at power, these people of the faubourg feel that their time has come, there is a talk in the faubourg about the general strike, and much more about the first paid vacancies, to be spent at the seaside. A small musical theater went out of business, the actors occupy the site and try reviving the thing, a young singer joins them and steals all hearts. It will not last long, and the political right plays ugly, eager to take the power back, at all costs. But the remembrance of that unique atmosphere will remain forever, with its enthusiasms and naiveties, and with the soaring of its popular culture: its movies and chansonettes, defining so well the spirit of the epoch. And that's what Faubourg 36 is doing brilliantly: it brings the feeling of the French movies of that time, of the music of the period, and through them that unforgettable year, 1936.

A special note for the cast: Gérard Jugnot makes me wish looking also for other of his movies, Pierre Richard is great in a role very different than his past comic creations, Bernard-Pierre Donnadieu very good as the bad guy (you need also a bad guy in a nice story, for the balance), Kad Merad is a very solid actor, and of course the two lovers are sweet, Nora Arnezeder and Clovis Cornillac. Then the music, original tunes created nowadays, while sounding very 1936. Adorable!
続きを読む
1人のお客様がこれが役に立ったと考えています
役に立った
フィードバックを送信中...
フィードバックをお寄せいただきありがとうございます。
申し訳ありませんが、お客様の投票の記録に失敗しました。もう一度試してください。
違反を報告
レビュー を日本語に翻訳する