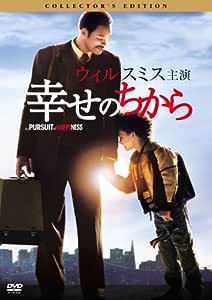 Antonia Tejeda Barros
5つ星のうち5.0 A beautiful & touching movie about hope, love, survival, fatherhood, and dreams, with a breathtaking performance by Will Smith
2016年9月12日に英国でレビュー済み
Amazonで購入
Chris (Will Smith): "Don’t ever let somebody tell you you can’t do something. Not even me. All right?"

Chris: "You got a dream, you gotta protect it. People can’t do somethin’ themselves, they wanna tell you you can’t do it. If you want somethin’, go get it. Period".

I have to confess that I have a big crush on Will Smith, an actor and rapper who I find super sexy, nice, funny, and cool. I’ve recently bought many of his movies and albums. I am only now discovering, together with my kids, The Fresh Prince of Bel-Air (Yes, I didn’t watch it in the 90s!). So, I bought this movie just because Will is in it. And I was blown away by the movie. The Pursuit of Happyness (yes, with a “Y”: that’s because of a misspelled graffiti on the wall of Christopher’s depressing day-care) is one of the best movies I have ever seen. The film is touching, surprising, sad and funny. The Pursuit of Happyness will break your heart and will make you value what you have. But this is not a depressing movie. It is a movie about hope, love, survival, fatherhood, and about never giving up your dreams.

The Pursuit of Happyness is based on a true story: the story of Chris Gardner and his struggle for a decent life while keeping his son next to him at all times. The real Chris Gardner was present throughout the shooting and discussed several things with Will and director Gabriele Muccino.

Will Smith was nominated for an Oscar for his breathtaking performance of Chris Gardner. That’s definitely one of the best performances of Will’s career (if not the best), together with his stunning portrayals of Muhammad Ali in Ali (2001) and Dr. Bennet Omalu in Concussion (2015).

Chris Gardner first thought that Will was miscast to play him, but his daughter Jacintha told him: “If Smith can play Muhammad Ali, he can play you!”.

Jaden Smith’s performance is also amazing. He wasn’t casted in the film right away. Director Gabriele Muccino saw some 250 kids and he said that they were all cute and fine. The problem was that Muccino wasn’t looking for a cute and fine little boy, but for a little boy who could be real. After a week, Muccino asked Will if his son Jaden could read for him, and, when he did, Muccino was amazed. The love that father and son have for each other in real life can be definitely felt in the movie. Jaden, who portrays a 5 year old Christopher, was 8 years old when the movie was shot and released. The real Christopher (Chris Gardner’s son), however, was just a baby at the time of the real events.

The best: Will’s brilliant performance, the toilet scene, Will’s running, Jaden’s fresh performance, and the board room scene towards the end of the movie.

Paulio
5つ星のうち5.0 Never Give Up!
2015年7月27日に英国でレビュー済み
Amazonで購入
The Pursuit of Happyness is a lovely film based on the true story of Christopher Gardner, a man who loses everything, but then builds a life from nothing with only his young son for company on an incredible journey.

The story follows Gardner (Will Smith) as he loses it all and then by chance takes up a salary free internship in a stock brokers, whilst living with his son in a homeless shelter.

The story is heartbreaking and uplifting in equal measure, Will Smith is great as Gardner and portrays the right levels of motivation and foolhardiness, Jayden Smith is very good as his son, and the intimacy between the pair, makes the story much more convincing during the most harrowing scenes.

I found this story to have a great arc and to be both sad and motivating in equal measure, watching Gardner lose everything you build a relationship with the character, meaning that you are rooting for him until the final scene. The elements where the father and son are forced to sleep rough in a tube station toilet was particularly hard to watch and the film doesn’t shy away from these scenes or sanitise them.

The film is well shot with good pacing and some lovely cinematography, the acting is first rate and this is an underrated but really worthwhile film.
続きを読む
2人のお客様がこれが役に立ったと考えています
違反を報告
レビュー を日本語に翻訳する

DL Productions UK
5つ星のうち4.0 Happy About The HD Transfer
2008年2月18日に英国でレビュー済み
Amazonで購入
A lot of Blu Ray disks at the moment mainly concentrate on the film itself, which is nice, but having the extras is a bonus, and this disk doesn't disappoint: all the extras from the original The Pursuit Of Happyness are here, which is great.

The film itself is good, Will Smith carrying Chris Gardner off well, and his son Jaden great. The story can sometimes be a bit unbelievable, but the way it's told really does make it enjoyable. Plenty of funny bits in between the sadness; the chases to get the bone scanner being some of the best action bits.

The Blu-ray transfer is great, 24fps, 1080p AVC, so it's great quality. The sound is also well transferred: 5.1 PCM, which isn't bad, would have liked TruHD, but that's by the by.

All the extras are here, in MPEG2 format, which is just a touch over the DVD quality. The best one being the Rubik's Cube featurette, fascinating.

This is well worth getting on the HD platform, it's clear as a bell and reminds me of when I saw it in cinemas, clear, bright and colourful. You won't find a better transfer, well until HD is superseded, but that's a long way away. If you really like this movie, get it, otherwise might be better getting the DVD.

4/5 for the film, 4/5 for the transfer and 3/5 for the extras.
続きを読む
4人のお客様がこれが役に立ったと考えています
違反を報告
レビュー を日本語に翻訳する

Mrs D
5つ星のうち5.0 Glad I got round to seeing this film
2013年1月24日に英国でレビュー済み
Amazonで購入
I had heard the hype around the film, and didn't believe it for the sheer fact that Will Smith was in it. Not a fan of his or his film roles, I dismissed this film. Until it came on Sky over christmas and I decided to see what the fuss was about. It was a complete revelation. Firstly, The casting was superb, even for a non fan I have to say Will Smith aced this role. He played the role of the hard working, down on his luck dad perfectly. During the films toughest moments Will acted his socks off. You can really see in his face, in his eyes, the complete and utter despair, his hope almost completly stubbed out yet he never gives up. I felt so down for them, yet secretly glad things aren't that bad for me. I was glad things worked out for him in the end, he deserved it. I just wished we got to see a bit more of the success by the end of the film.
続きを読む
違反を報告
レビュー を日本語に翻訳する

Patrice
5つ星のうち3.0 Relationship between a father and son
2020年2月16日に英国でレビュー済み
Amazonで購入
A good portrayal of the pursuit of Happyness (which is spotted spelt wrongly on a wall) especially as Will Smith acts with his son who steals the show. But it does drag on a bit and tends to be a bit monotonous. I enjoyed it but wouldn't want to watch it again.
続きを読む
違反を報告
レビュー を日本語に翻訳する
すべてのレビューを参照します
Amazonプライム会員ならお急ぎ便、日時指定便が使い放題
さらに、映画もTV番組も見放題。200万曲が聴き放題 。クラウドに好きなだけ写真も保存可能。
> プライムを無料で試す