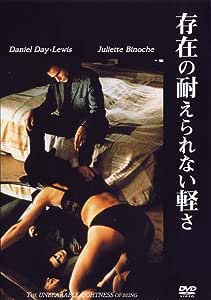 Keith M
5つ星のうち5.0 Kaufman’s Intensely Cinematic Love Story
2017年5月27日に英国でレビュー済み
Amazonで購入
With his 1988 adaptation of Milan Kundera’s lauded novel, director Philip Kaufman not only gives us an intensely passionate, highly cinematic three-way love story, but also marshals an impressively international team in doing so. France is represented by being the film’s proxy location for Kundera’s Prague 1968 setting (with some actual Prague footage edited in), as well as providing co-screenwriter (and regular Luis Bunuel collaborator) Jean-Claude Carrière and one of Kaufman’s acting leads, a 23-year old Juliette Binoche as amateur photographer, Tereza, delivering a brilliantly moving turn in her first English-speaking screen role. Curiously, Sweden is also heavily represented via cinematographer (and regular Ingmar Bergman collaborator) Sven Nykvist, whose evocation here of 'Prague bohemia’ is highly memorable, and actors Lena Olin, also delivering an impressively complex performance as artist, Sabina, plus Erland Josephson (another Bergman collaborator) and Stellan Skarsgard. Leading for the Brits is, of course, Daniel Day-Lewis again excellent as brain surgeon and womaniser, Tomas, whilst elsewhere in the cast we also get Dutch, Polish and (appropriately) Czech representation.

Kaufman’s film is one of truly epic proportions, running to just short of three hours, switching 'location’ between Prague and Geneva, and pulling off a successful cinematic 'marriage’ of love story against the political backdrop of the Prague Spring (with Soviet tanks rolling in around mid-film). Indeed, the film’s undercurrent of repressive political machinations and potential conspiracies adds another layer of uncertainty to the lives of Kaufman’s central protagonists, as Tereza’s shy innocent in love is pitched (optimistically) against the seemingly carefree hedonism of Tomas and Sabina, thus upping the ante on the trio’s own existential crises. The aura of tension between the prevailing communist regime and burgeoning liberalism is never far away – there is a particularly memorable music concert/party scene in which That’ll Be The Day is usurped by party apparatchiks – but (for me) it is the scenes involving Kaufman’s central trio where the film really scores. Sexual symbolism is frequently to the fore, whether it be phallic cacti, Sabina’s hat or the recurring use of mirrors, the latter also playing up the theme of transient identity and used to spice up Tomas and Sabina’s couplings and to lend Sabina and Tereza’s mutual photography shoot a touch of Welles’ The Lady From Shanghai. Other particularly memorable sequences include that where Tomas’ political humiliation is completed as we cut to him as window cleaner (with Prague’s Church of Our Lady before Tyn enshrouded in scaffolding in the background) and, to reinforce Tereza’s seeming despair in her search for 'spiritual’ love, first she is confronted in a bar by a youth ordering ‘cognac’ (significantly recalling an earlier incident) and then where Tereza suffers a truly horrific coupling with Skarsgard’s 'nice’ engineer.

The film’s ever-present cultural content (literature, music, photography) is reinforced by Kaufman’s excellent use of music, principally by Leos Janacek, whose use in some of the more comedic sequences called to my mind Kubrick. The other cinematic comparator that occurred to me, partly given the communist content and presence of Binoche was that of Krzysztof Kieslowski, oddly though not Three Colours Blue (in which Binoche appeared), but more the innocence, against a political backdrop, of Irène Jacob in The Double Life of Véronique.
続きを読む
12人のお客様がこれが役に立ったと考えています
役に立った
フィードバックを送信中...
フィードバックをお寄せいただきありがとうございます。
申し訳ありませんが、お客様の投票の記録に失敗しました。もう一度試してください。
違反を報告
レビュー を日本語に翻訳する

Azimuth500
5つ星のうち4.0 Layered
2018年12月14日に英国でレビュー済み
Amazonで購入
This film is several things at once, a story of passionate love, a window onto the folk life of the Czech people, and a historical record of the menace and the fear of the Soviet invasion of Prague in 1968. Daniel Day Lewis, as a young doctor, is a compelling 'player' and ladies' man; Juliette Binoche plays the role of a sweet, vulnerable young woman, and through trial and error the two gradually become inseparable. This is life and life is ephemeral; suffice to say that this film is textured to a degree that distinguishes it from many others. It is the work of US director Philip Kaufman.
続きを読む
役に立った
フィードバックを送信中...
フィードバックをお寄せいただきありがとうございます。
申し訳ありませんが、お客様の投票の記録に失敗しました。もう一度試してください。
違反を報告
レビュー を日本語に翻訳する

Trevor Willsmer
5つ星のうち3.0 Just another love story
2007年4月13日に英国でレビュー済み
Amazonで購入
The Unbearable Lightness of Being is one of those occasional attempts by American filmmakers to make a European arthouse movie in English, in this case taking on an `unfilmable' novel and trying to solve the problem of turning inner monologue into a credible narrative. Despite, or perhaps because of Jean-Claude Carriere's presence as co-writer with director Philip Kaufman, this tends to take the form of the odd conversation between shags rather than an attempt to turn ideas into images, leaving a rather conventional narrative about a philandering surgeon who ultimately needs the oppression of the Russian invasion rather than the freedom of the Czech Spring to focus his emotional commitments and principles. Some of this is done well, some of it less well, but at the end of the day it's just a love story, although it deals well with the personal consequences of the political crackdown and the ending is quietly moving. Which, in a way, reflects some kind of emotional triumph - whereas for most of the film we don't really care for the characters, merely go along with them, by the end, like he hero, we have at least attained some genuine level of emotional commitment.

Whether that entirely justifies 171-minutes of screen time is debatable, though in its defense the film never feels that long. There are moments that grate, not least the sporadically clumsy integration of the main characters into archive footage of the Russian invasion that draws attention to itself by the crude device of adding scratches only to the new footage. The photography session doesn't quite work either despite an interesting start, not quite pulling off the shift of power and veering off into self-indulgence. The performances are slightly problematic too, especially with the Czechs limited to the smaller supporting roles in an Anglo-French-Swedish-American cast leading to a variety of composite accents (often more Germanic than Slav) and a feeling that the casting directors thought "Yeah, he sounds foreign, he'll do" at times. Daniel Day Lewis fares well as the coldly charismatic and fickle doc but still hadn't shrugged off that well-trained British stage actor feel to his performances; Juliette Binoche is genuinely appealing in one of her more open performances, although it's a bit of a stretch that her character never loses her naiveté; but as the more passionate of his loves Lena Olin is somewhat more problematic, her performance getting less convincing as the film progresses until rediscovering its humanity in her final scene. Of the supporting players, Erland Josephon has one good scene as a former ambassador reduced to being a janitor that underlines the way that even love and sex can be used as weapons of political oppression merely through the introduction of doubt - an idea that becomes strangely more powerful because of the way Kaufman frequently fails to summon up much in the way of eroticism because he generally regards sex as joyfully comic.

Annoyingly the film has been split across two discs, although the break isn't quite as abrupt as on some other discs. The DVD boasts a good transfer with an interesting audio commentary and good half hour documentary that illustrates that even if they didn't entirely succeed at least the filmmakers were trying to create something of real substance.
続きを読む
9人のお客様がこれが役に立ったと考えています
役に立った
フィードバックを送信中...
フィードバックをお寄せいただきありがとうございます。
申し訳ありませんが、お客様の投票の記録に失敗しました。もう一度試してください。
違反を報告
レビュー を日本語に翻訳する

Zdenek Hanzlik
5つ星のうち3.0 Have it ..? what ? it what those others have
2016年5月27日に英国でレビュー済み
Amazonで購入
from distance of the time it was average people to do a job have a role what is not for average people meant. And millions went through that time with a gauge what those others had and we had not. the whole consumerism of freedom.
続きを読む
2人のお客様がこれが役に立ったと考えています
役に立った
フィードバックを送信中...
フィードバックをお寄せいただきありがとうございます。
申し訳ありませんが、お客様の投票の記録に失敗しました。もう一度試してください。
違反を報告
レビュー を日本語に翻訳する
その他の国際レビューを読み込む

C. Evans
5つ星のうち3.0 A good film, but better as a novel.
2013年3月31日に英国でレビュー済み
Amazonで購入
This is entertaining, but it doesn't quite capture the elegance and philosophy of the original book. As a visual adaption, it does try it's best. The acting is very good & the characters are engaging. However, the love/lust paradox, is not as eloquently adressed as in the book. So, perhaps it is worth reading Milan Kundera's book, then watching this.
続きを読む
2人のお客様がこれが役に立ったと考えています
役に立った
フィードバックを送信中...
フィードバックをお寄せいただきありがとうございます。
申し訳ありませんが、お客様の投票の記録に失敗しました。もう一度試してください。
違反を報告
レビュー を日本語に翻訳する

longant
5つ星のうち4.0 will keep
2013年4月4日に英国でレビュー済み
Amazonで購入
Had not seen this since I saw it in the cinema in the mid 1980s. Still good , athough a bit long piece of work with a young Daniel Day Lewis. Will keep this dvd and not sell on which I only do if I genuinely like something.
続きを読む
2人のお客様がこれが役に立ったと考えています
役に立った
フィードバックを送信中...
フィードバックをお寄せいただきありがとうございます。
申し訳ありませんが、お客様の投票の記録に失敗しました。もう一度試してください。
違反を報告
レビュー を日本語に翻訳する

Johannes Doreleyers
5つ星のうち5.0 Excellent film
2010年11月13日にカナダでレビュー済み
Amazonで購入
I thoroughly enjoyed this film. Like another reviewer, I saw this movie when it was first released and owned it on VHS. This movie has something for everyone. it is funny in places, erotic in others, but it can also be deadly serious. The depiction of the Russian invasion is brutal and the extend to which the decadent communist regime went to suppress any form of opposition, however slight, is shocking (Tomas, a brain surgeon, end up washing windows for a living). As Russian tanks rolled in and suppressed the futile resistance of an impotent population I was reminded how Hitler was allowed to invade much of Eastern Europe unopposed while the world stood by and watched. All in all, an excellent film with a thoughtful message
続きを読む
3人のお客様がこれが役に立ったと考えています
役に立った
フィードバックを送信中...
フィードバックをお寄せいただきありがとうございます。
申し訳ありませんが、お客様の投票の記録に失敗しました。もう一度試してください。
違反を報告
レビュー を日本語に翻訳する

badman
5つ星のうち5.0 Effortlessly bearable
2006年10月24日に英国でレビュー済み
Amazonで購入
Don't believe a word of the review below - wonder why he or she wouldn't put their name to it. This is a lovely enchanting film and a crying shame it isn't presently available on dvd. If you like a love against the odds film and a simple story lovingly told then buy this and you won't be disappointed, Lena Olin is just seductively lovely and Juliette Binoche is a very young and utterly convincing, naive girl touched by the madness of love for the very first time