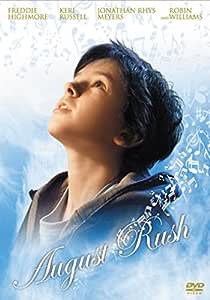 A musically gifted orphan, Evan (Freddie Highmore), runs away from his orphanage and searches New York City for his birth parents. On his journey, he's taken under the wing of the Wizard (Robin Williams), a homeless man who lives in an abandoned theater. After discovering his talent, the Wizard gives Evan the name "August Rush" and devises a plan to profit from his talent. Little does Evan know that his parents, Lyla (Keri Russell) and Louis (Jonathan Rhys Meyers), are searching for him too.

Vicuña
5つ星のうち5.0 Music, love and loss and with a great soundtrack
2018年4月8日に英国でレビュー済み
Amazonで購入
This is one of a handful of films I'm happy to watch more than once. It's a story with guts and Freddie Highmore plays his role to perfection. I really like the way it shows that music can be a positive influence in life. It's about much more than that, but there are some amazing tracks and that's the thread that runs through the film. Not much by way of bonus on the DVD, just a few deleted scenes. Sit back and enjoy this modern day fairytale about loss and relationships.
続きを読む
1人のお客様がこれが役に立ったと考えています
役に立った
フィードバックを送信中...
フィードバックをお寄せいただきありがとうございます。
申し訳ありませんが、お客様の投票の記録に失敗しました。もう一度試してください。
違反を報告
レビュー を日本語に翻訳する

Songbird
5つ星のうち4.0 Anyone who has a heart (and imagination) will love this film......!
2012年2月12日に英国でレビュー済み
Amazonで購入
Reading through previous reviews - there's quite a polarisation in those who do and those who do not appreciate this film. Rather like folks who have natural pitch and those who are tone deaf......
Perhaps one of the problems (why it loses a star for me) is the way it is titled and packaged. It gives the impression of a sugary sweet, talented, child-brat on a Summer holiday...."Found" would have had more gravitas - perhaps?
Freddie Highmore was nominated for a BAFTA in 2007 for this excellent portrayal of a gifted determined child, following his winning BAFTAs for "Finding Neverland" and "Charlie and the Chocolate Factory" - both alongside Johnny Depp.
Those reviewers who bang on about it being totally predictable with impossible coincidences are missing the point - it is about the communication which music gives us all - beyond distance, language, and ethnicity. The synchronicity between classical pieces (Elgar's Cello Concerto with Jonathan Rhys Meyers' own modern rock) is just awe inspiring - and unusual.
Robin Williams does make for rather a strange "Fagin" character, but he still manages to portray the boy (he was) who hasn't healed from past hurts, hence him trying to live vicariously through his streetwise band of busking "recruits". Keri Russell is so beautiful.....convincing enough to make me reach for the tissues.
Especially stunning, and not mentioned by many reviewers - are the sights and sounds of everyday life - all spliced together, and orchestrated by the film's producers. It has changed the way I walk through large Cities, or even underneath trees, or by the sea...
Yes - it DOES have a happy ending - but WHY NOT???? There's too much naked, raw realism in this World as it is.

Donald M. Macdonald
5つ星のうち4.0 a musical journey
2009年5月2日に英国でレビュー済み
Amazonで購入
My cousin has this dvd and I think it's sensational.
'The music is all around us - all we have to do is listen' are the closing words in this film. How we get to the conclusion is a story that is well worth the telling. August Rush is a musically gifted boy who has spent his childhood in a Children's Home. He knows that he has a family and he is convinced he can find them if he 'follows the music'.
He does not know that his musical gift comes from his parents - one a gifted cellist and one a talented singer songwriter who met one night and were suddenly parted the very next day. He was the result of that one night's passion. August's parents are alive and are unaware of his existence or even of each other's location.
August travels to New York City to search for his mother and father and falls in with a rag tag bunch of youngsters who are given a home by the pied piper like 'Wizard' played by Robin Williams in exchange for busking and helping pay their way.
This is a stunning film with electrifying music, great use of locations, some wonderful camera work and more than a little sparkle. This is the kind of film that will surpass any expectations you have of it.

king37
5つ星のうち5.0 totaly awsome
2015年10月4日に英国でレビュー済み
Amazonで購入
this is an awsome film the tale of a child growing up in care trying to find his parents. he knows there alive because he can hear the music.
so the 1st part is how hard it is in care and escaping into the world, 2nd is how the parents met and from there the tale unfolds into a truely fantastic film.
wait till you hear the music you will be blown away.

also stars robbin williams as like the new age fagan (oliver twist) take kids out to busk on street corners to make cash for him, when he hears the child play dollars start ringing in his ears.

Grace Poole
5つ星のうち4.0 Family Film
2009年11月13日に英国でレビュー済み
Amazonで購入
It's rare these days to get a film that all the family can watch and enjoy. August Rush is one of them.

Freddie Highmore quite rightly steals the show as the main character who is a musical child prodigy. It has the feel of Home Alone/Oliver! (complete with Robin Williams as a modern day Fagin character) and it's a bit Disney complete with fairy tale ending.

When I watched it the first time I was totally caught up in the story and whether everything would turn out ok in the end. But on rewatching it, you notice the wonderful direction Kirsten Sheridan brings to the film. It really is beautifully filmed and the scene where August is all alone in the city for the first time really captures how scared he is in a new, strange and noisy environment.

It's lighthearted, but a feelgood film for all the family

Sleepless in Seattle
5つ星のうち5.0 Amazing Love Story
2009年5月8日に英国でレビュー済み
Amazonで購入
If you are an absolute Romantic than do not miss this movie. But if you say i am not romantic at all, than watch this movie even for the nice soundtrack,
One of the best romantic movies i have ever seen for the last couple of years.
Girls you can watch this movie even for handsome hunk Jonathan Rhys Myers..
It brings Robbin Williams, Kerri Russel, and Jonathan Rhys Myers together in the same movie..

it is the story of how music bring together a father, son and mother who doesn't even know about their son.

Go and watch it, it worths..

Mrs.Simone Burrows
5つ星のうち5.0 Music of the day and of the night
2014年8月13日に英国でレビュー済み
Amazonで購入
Not an easy film to watch - a boy looking to find his parents who sends out a message in music which he is sure that only they will understand. A single mother, a gifted celloist, who thought her son had died at birth and a musician who didn't know that he had a son.
Music inspires, binds and leads them to find one another. Robin Williams (now deceased and so sadly missed) both inspires and threatens the young boy. He recognises the musical genius and mentors the boy but he also wants to control the boy's future
続きを読む
役に立った
フィードバックを送信中...
フィードバックをお寄せいただきありがとうございます。
申し訳ありませんが、お客様の投票の記録に失敗しました。もう一度試してください。
違反を報告
レビュー を日本語に翻訳する

michael walker
5つ星のうち5.0 A truly wonderful family film
2017年11月17日に英国でレビュー済み
Amazonで購入
A truly wonderful family film, with the cast of actors, giving a paramount performance, of a heart rendering story.
A must see film, in which it shows, one can over come almost anything, if you have the determination to succeed.
Your goals can be achieved, if one try's hard enough. At any age!
続きを読む
役に立った
フィードバックを送信中...
フィードバックをお寄せいただきありがとうございます。
申し訳ありませんが、お客様の投票の記録に失敗しました。もう一度試してください。
違反を報告
レビュー を日本語に翻訳する

Chris Hall
5つ星のうち5.0 A great film for music lovers
2014年11月9日に英国でレビュー済み
Amazonで購入
Excellent movie, kind of a retelling of Oliver Twist, but still managed to find it's own little niche. Starring Freddie Highmore as a musical prodigy who grows up in an orphanage, before running away to the big city to find his parents. The music is great, Freddie Highmore plays it really well, and it's great seeing Robin Williams as the 'Fagan' character. Also great to see Keri Russell again playing alongside Jonathan Rhys Meyers.
続きを読む
役に立った
フィードバックを送信中...
フィードバックをお寄せいただきありがとうございます。
申し訳ありませんが、お客様の投票の記録に失敗しました。もう一度試してください。
違反を報告
レビュー を日本語に翻訳する
その他の国際レビューを読み込む

Ro
5つ星のうち5.0 If you hadn't found me, I would have found you!
2013年6月2日に英国でレビュー済み
Amazonで購入
I really enjoyed this film and felt compelled to buy it on DVD. Watching it again I noticed much more of the connections. The busker playing the mouth organ to Moondance that draws together Louis and Lyla is Wizard, so in a way he is involved in creating Evan/August. I noticed Lyla was listening when Louis sang, Louis screamed when Lyla had her accident and many other synchronicities. It is a film about family, but Lyla's father is domineering, Louis' brother doesn't believe in him, but Lyla's friend Lizzie is really supportive and encouraging.
It is well worth watching the deleted scenes, especially "Louis the Dreamer" where he talks more about his night with Lyla and "Evan went to NYC" where Peter talks to Lyla.
This is a heart-warming film which you can just let wash over you. I only wish they had rushed together at the end into a big family hug, then Lyla and Louis had fostered Hope, Arthur and Peter - it would be a noisy family but lots of joy and love!
続きを読む
役に立った
フィードバックを送信中...
フィードバックをお寄せいただきありがとうございます。
申し訳ありませんが、お客様の投票の記録に失敗しました。もう一度試してください。
違反を報告
レビュー を日本語に翻訳する

RICHARD
5つ星のうち5.0 If music be the food of love, play on.
2012年12月23日に英国でレビュー済み
Amazonで購入
I first saw this film on television and knew it was going to be my kind of film. My background and upbringing has been steeped in music; for me this film was magical, if only for the music itself. Yes it was tear jerking and yes the ending was too fast, even though I knew, from the music, that it must end happily.

The film is a must for those who feel that 'music is the food of love'. There are films that should be viewed for the magic which captures the imagination, as in fairy tales, and should not be for unfeeling critics, who perhaps do not understand just what music is all about and how it relates to living and the innermost feelings that it invokes in those who understand it. I thought the acting was just about right, although possibly would not win any Oscars. But for pure feeling, beautiflul music and scenery, it was just up my street.

polly
5つ星のうち5.0 Absolutely love it, a very magical,emotional and soulful film.
2013年3月6日に英国でレビュー済み
Amazonで購入
This is one of my favourite films, I watch this over and over and can never tire of it. Beautiful story, the ending makes me cry without fail every time. such a wonderful ending, Jonathon Ryhs Meyers is fantastic in this film, i have collected many of his films but this one has got to be my favourite without a doubt.I have now bought 5 copies of this film for myself, sister my my daughter and my mum and they all appreciate it as much as i do. A very magical, emotional and soulful film. :)
続きを読む
役に立った
フィードバックを送信中...
フィードバックをお寄せいただきありがとうございます。
申し訳ありませんが、お客様の投票の記録に失敗しました。もう一度試してください。
違反を報告
レビュー を日本語に翻訳する