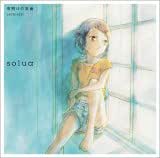 After having wish-listed this 6 or so years ago, I randomly discovered Amazon had it in stock for a little over 4 dollars. Thinking this was some sort of error and unsure of what to expect, I bought it anyway and lo and behold, an Amazon warehouse in God knows where actually had a copy of this JAPANESE single lying around.

KarmaCollar
5つ星のうち1.0 Total Rip-Off
2008年8月29日 - (Amazon.com)
形式: CDAmazonで購入
I could not BELIEVE I paid this much money for this CD when I got it. There is a reason there are no samples of the tracks or even any tracks at all listed here. I originally looked up "Noein Soundtrack" and this product came up, so I ordered it, and did not realize until it came that it is NOT the soundtrack, it has FOUR SONGS on it. Period. Apparently they are the songs sung only by solua and their instrumental versions and that's it.

Total waste of money for the worst songs of the soundtrack. I was primarily interested in the instrumental pieces throughout the episodes, what you get here are the opening/closing and their instrumental versions. That's it.

Even if you knew this disc had only songs by solua and only wanted to hear her music, this would STILL be a complete ripoff, considering it's nearly $30 for FOUR songs.