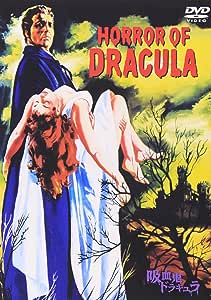 Andrew Banks
5つ星のうち5.0 X rated Hammer version
2011年2月1日に英国でレビュー済み
Amazonで購入
In 1951 the British Board of Film Censors introduced the X certificate, which restricted admission to the designated films to people over the age of sixteen. Most British film makers tended to shun X certificate material, but Hammer Films bucked this trend when they achieved considerable box office success with two X certificate films, namely 'The Quatermass Experiment' (1955) and 'The Curse of Frankenstein' (1957). After Hammer's success with their adaptation of the Mary Shelley novel, in 1958 they decided to tackle the other great nineteenth century horror classic, Bram Stoker's 'Dracula'. The X certificate classification allowed the director Terence Fisher the freedom to film scenes in which stakes are plunged into the hearts of vampires, and the vampires themselves bare their fangs whilst looming over their victims' necks.

Jimmy Sangster's screenplay is true to the spirit, if not the letter of Bram Stoker's novel. In the book, Jonathan Harker is an estate agent who visits Castle Dracula to sell a London property to the count. It takes Harker quite a while in the novel to discover the truth about his host. Since the movie has a relatively short running time of 81 minutes, in order to speed up the development of the plot Harker is a vampire hunter in the film. He takes a job as a librarian at Castle Dracula in order to hunt down and kill the count. Other changes to the book are less easy to explain. In the novel, Lucy is engaged to Arthur Holmwood, but in this film version Lucy is Arthur's sister.

The music score composed by James Bernard and the cinematography of Jack Asher help to create the film's suspense and underscore the moments of terror. Of particular note is Dracula's first appearance in dark shadow at the top of a flight of stairs. Christopher Lee has genuine screen presence as the count, and he successfully combines menace and sexual allure. As Dr Van Helsing, Peter Cushing is outstanding. He conveys an air of calm authority in scenes like the one in which he questions the innkeeper about the whereabouts of Jonathan Harker, but he is also able to show intense emotion, as in the reaction shot of him looking at the death of Dracula. In conclusion, this is not only a classic of horror cinema, it is a true cinema classic.

The American Warner Brothers DVD subdivides the film into twenty six chapters. The viewer is able to access subtitles in English, French, Spanish and Portugese. The cast and crew feature is minimal, only listing four members of the cast, along with the writer, director and producer. 'Dracula Lives Again' provides a brief history of the Hammer Dracula franchise. It contains inaccuracies. For example, we are told that in 'The Brides of Dracula', "Cushing returns as Van Helsing fighting a brother/sister team of vampires." In fact Baroness and Baron Meinster are mother and son rather than brother and sister. The other bonus is the original cinema trailer, which provides an entertaining distillation of the main feature in less than three minutes.
続きを読む
7人のお客様がこれが役に立ったと考えています
違反を報告
レビュー を日本語に翻訳する

Mr. David Harvie
5つ星のうち5.0 Dracula 1958.
2015年3月19日に英国でレビュー済み
Amazonで購入
A great movie,Dracula (1958),Starring Mr Peter Cushing and Mr Christopher Lee. Van Helsing,( Cushing)travels to where Dracula lives to find a friend,who has disappeared,and finds him dead with bite marks on his neck. So starts a reign of terror,in the small town,it takes Van Helsing to kill Dracula within his own house. Brilliant dvd. Great service and delivery from this seller.
続きを読む
1人のお客様がこれが役に立ったと考えています
違反を報告
レビュー を日本語に翻訳する

John Northfield
5つ星のうち5.0 Horror of Dracula
2013年1月28日に英国でレビュー済み
Amazonで購入
This is the second of these old Hammer Dracula films i have bought as i first viewed them many yeays ago as a young man so liked the idear to view again this one being the first release and very good.
The film i best remember with Christopher Lee playing Dracula is the one where in the final scene he falls from his castle and and ends up impaled on a large crucifix cross with loud emotive clasical music playing at his end but what is this film called as its the one i most wanted but can not remember its title to buy,does any one out there know this films title ???
続きを読む
違反を報告
レビュー を日本語に翻訳する

GJ Veenbrink
5つ星のうち4.0 Shiverings down the back
2014年2月6日に英国でレビュー済み
Amazonで購入
I remember seeing this film when I was 17 years old.
At that age things make a huge impact. Off course I knew that vampires did not really exist, but started to look behind me all the time
It pleased me to see that the film was in such good condition, nice sound, nice colours.
It took me right back to my youth, but now on the couch with a glass of wine and not in aan obscure cinema
a must for people who like horror!
続きを読む
違反を報告
レビュー を日本語に翻訳する
すべてのレビューを参照します
Amazonプライム会員ならお急ぎ便、日時指定便が使い放題
さらに、映画もTV番組も見放題。200万曲が聴き放題 。クラウドに好きなだけ写真も保存可能。
> プライムを無料で試す