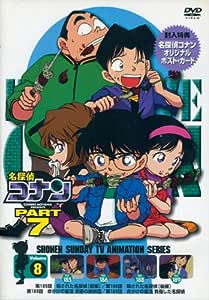 Makkii
5つ星のうち5.0 The Desperate Revival of Detective Boys
2005年3月4日に日本でレビュー済み
This DVD contains episodes 188 and 189 of the long running seirese "Detective Conan".
In the beginning of episode 188, as Ran was going to take a bath, her father, Kogoro tells her that the bathroom is broken down and she has to go somewhere else. Since Conan also wanted to take a bath he suggests that they go Dr Agasa's house. Since it's too late, Kogoro tell them to take the bath together and hurry. It is normal in japanese culture for small kids like Conan to take bath with his elders till certain age, but here Ran exploded on him when he say that saying "How can I take a bath with Conan-kun?"
Although it is not like that Conan wanted to take a bath with her, but he started to think that she has found out the truth about him.
He could not find anything further, and assumed that he was just thinking too much. Later, he went with Dr. Agasa and detective boys for camping, and somehow Conan, Ayumi, Genta and Mitsuhiko got into a limestone cave where they discovered three men trying to hide a dead body there!
As they were trying to escape Conan got shot by them, and somehow they could not go back to the entrance of the cave, so they went more deep inside! At the end of the cave they found 5 different exits... Conan was able to find clues that tells which road is the right one, but he lost his consciousness before he could tell them, and then it was up to the dective boys to find out the clues themselves and save Conan!
On Episode 188, Detective Boys find out the clues and get out of the cave... and Conan is taken to the hospital. As he lost a lot of blood, they needed to transfere some blood to him, but unfortunatly as his blood type was rear, they didn't have any at that time. What made Conan get surprised is that Ran asked them to take from her blood because her blood type was the same as him. And she looked so sure of that, which made Conan, Haibara and Dr. Agasa realize that She reall knows the truth!