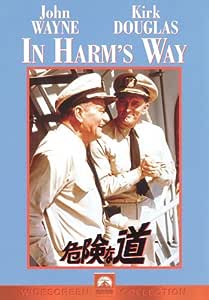 bernie (xyzzy)
5つ星のうち5.0 This movie is enjoyable on many levels.
2014年4月29日に日本でレビュー済み
Right off you know it is a John Wayne movie. It is bound to have some John Wayne formula and actors that he works with in other movies. Add to this a cast not just of names, but actors that have a following in their won right. Now you have some great material to work with.

Throw in Director Otto Preminger, who directed “Laura” (1944) (see my review) and many other fine films.

Add an intriguing story. It almost seems like two films. The first film being before the war with the relationships surrounding navy life and the Eddingtons (Kirk Douglas, and Barbara Bouchet). The second is after the war gets going with too many subplots to name. However I appreciated the relationship as Captain Rockwell Torrey (John Wayne) rediscovers and builds a relationship with his son, Ensign Jeremiah 'Jere' Torrey (Brandon De Wilde).

You get the entire DVD goodie that make them work while. This includes (Original making-of In Harm's Way)

I do not want to leave you with some idea that this is some sort of artsy movie. It really is a war movie with fast ships going in harm's way.
続きを読む
2人のお客様がこれが役に立ったと考えています
役に立った
コメント 違反を報告
レビュー を日本語に翻訳する