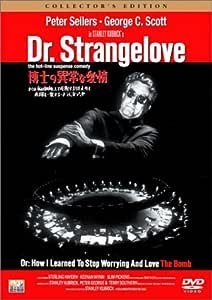 Mr G
5つ星のうち5.0 Dr. Strangelove or: How I Learned to Stop Worrying and Love the Bomb
2020年9月27日に英国でレビュー済み
Amazonで購入
This is the film for all conspiracy theorists, spies or general nutcases out there. The theatrical release was delayed due to the assassination of President Kennedy and after the Cuban Missile Crisis had taken place. The Cold War was at its height and spy series abounded on TV. This was a trend that would continue right up to the early 70s when the world was under left wing rule and also under threat from Communist expansion in the East. (Nothing changes does it?). Peter Sellers is excellent in this film, and he plays several characters including a US President based on Adlai Stevenson II (Democrat), who twice failed in his attempt to become president against Dwight D. Eisenhower (Republican) in the 1950s. Sellers also portrays the demented Dr. Strangelove who you could possibly see as an extreme caricature of Nazi rocket scientist Wernher Von Braun.

The DVD extras on the second disc have all the background about the film, and you don't need to be Einstein to view them.

One film that is a brilliant comparison to this, and great to watch in tandem, is "The Great Dictator" starring Charlie Chaplin. Ironically, probably the greatest film he ever made, and it is a talkie, released in 1940. It featured disclosure of ghettos and concentration camps, and the world (read: the US) did nothing (LA Times 2018), but hindsight is a great thing when you are sitting in the comfort of your home 80 years later and you just want to watch a film on television. And, for some reason of the two films I actually find the ending of this film more unsettling than Dr. Strangelove.

If you are going to watch one film before you die, make it a film by Stanley Kubrick, you can't go wrong.
続きを読む
違反を報告
レビュー を日本語に翻訳する

LONDON NINJA.
5つ星のうち5.0 M-A-D
2016年12月10日に英国でレビュー済み
Amazonで購入
Once upon a time in the cold war, there was something called
MAD (Mutual-Assured-Destruction), which meant whoever
started WW3, the other side would react in kind, thus destroying
each other... yes... quite mad... I know, but this was a everyday
reality living in the cold war. and being a child of the
cold war, I remember the fear of Nuclear War,.

Although the cold war is over, we still face the threat of a nuclear
war, but it is not something we overtally worry about, but back
in the 1960s, it was a possibility, and that is why this film is so
good, as It really taps into the fear of those times.

I can't say anything more about this movie. Yes, there are
a couple of flaws in it, but so does any masterpiece, and
this is a classic. I love Sterling Hayden, and can watch him
in any thing. George C Scott is great too, and Ken Adam's
set designs are brilliant...

You must watch this film at least once in your life.
続きを読む
3人のお客様がこれが役に立ったと考えています
違反を報告
レビュー を日本語に翻訳する

Will Mac
5つ星のうち5.0 Striking dark humour with a serious point
2020年4月25日に英国でレビュー済み
Amazonで購入
Brilliant acting by Peter Sellers in three different roles, President, RAF adjutant and insane scientific adviser. (Interesting that, originally, Sellers was going to play a 4th role - that of the B52 pilot - very well played in the end by 'Slim' Pickens). George C Scott plays an excellent parody of his previous roles - all to good effect. From start to finish the film is full of dark references in ironic humour (probably only best understood by those of us who remember those times - the height of the cold war). Tremendously humorous throughout.
続きを読む
違反を報告
レビュー を日本語に翻訳する

H. A.
5つ星のうち5.0 Classic Cold War Comedy Drama
2016年4月16日に英国でレビュー済み
Amazonで購入
Brilliant satire of the Cold War. This is director Stanley Kubrick at his best.Peter Sellers' performances(he plays three roles) steals the show.. Especially in the part of Dr. Strangelove ,the crazy nazi adviser in a wheelchair . One half of him is 100% nazi, the other half 'normal' ,creating a man in conflict with himself(mentally and physically). Sterling Hayden is the insane air force general who is determined to bring about the nuclear apocalypse.The film goes from comedy to surreal horror as doomsday approaches.George C Scott is also very good as the chairman of the Joint Chiefs. The final minutes of the film however belong to the talented character actor Slim Pickens and this scene will be etched into your mind for ever.Great classic film -Get it if you have not seen it .Well worth the cost of the movie
続きを読む
3人のお客様がこれが役に立ったと考えています
違反を報告
レビュー を日本語に翻訳する

John
5つ星のうち5.0 Wanted a copy to keep.
2020年12月29日に英国でレビュー済み
Amazonで購入
What a film, I quite happily sat down and engaged with this movie and did not pick my tablet once. In my mind the whole film demonstrates the oldest trick in the book meaning (divide and conquer) and how arrogance and greed can lead you to be a legend in your own mind. The whole ambience of the film from all angles just fuses together with purpose. Even though Peter Sellars takes many leading roles he doesn’t outshine the rest of the cast as the standards are very high all round.
続きを読む
違反を報告
レビュー を日本語に翻訳する
すべてのレビューを参照します
Amazonプライム会員ならお急ぎ便、日時指定便が使い放題
さらに、映画もTV番組も見放題。200万曲が聴き放題 。クラウドに好きなだけ写真も保存可能。
> プライムを無料で試す