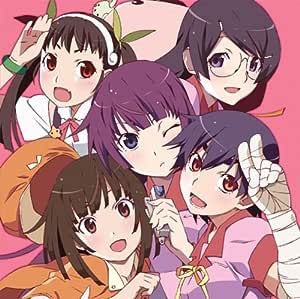 Scorv
5つ星のうち5.0 Product Review, not series review.
2016年2月18日にアメリカ合衆国でレビュー済み
Amazonで購入
Assuming those who are looking at this are fans of the Monogatari series or know someone who is, so I'll skip the part of the review where I rant about the show.

I will start with the product itself. Two CD's in one case that is the same size as a CD case that contains a single CD. (This is a Japanese product so the writing is probably 97% kana/kanji, 3% English) The CD's have a combined 69 songs which the Amazon music player on my phone says is 2 hours and 31 minutes long.
The little booklet that comes inside the case has a list of the track names with their respective number on each CD. It also contains the lyrics (yes, it is in Japanese) for the opening songs for each story arc. These songs are sung by the respective voice actor for each character. For clarification: the first song, staple staple, is sung by the voice actor for Senjyougahara Hitagi; Third song, ambivalent world, sung by the voice actor for Suruga Kanbaru.
That's about it. Very impressed with what I got, very happy with the content. Worth every penny.

A WORD OF WARNING:
Because this is the soundtrack for the monogatari series, it has the music FROM the series. Which means every one of these songs, with the exception of the opening songs and the ending song, were played with there was either a monologue or dialog going on. The music itself is quite simple, because for the most part it's BACKGROUND music. And really good background music at that.