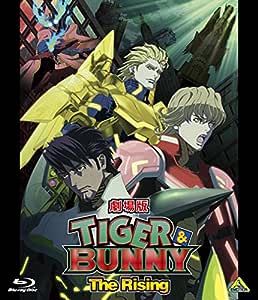 Not Cordelia
5つ星のうち5.0 Gorgeous art, lots of extras, not in English.
2014年11月2日にアメリカ合衆国でレビュー済み
Amazonで購入
For anyone who's curious or hasn't looked this up on another site for a specific list of the contents, this is the Limited Edition box set and it comes with:

1.) Outer box, featuring Kotetsu and Barnaby on one side (as pictured) and Golden Ryan on the other.
2.) The BluRay disc of the movie. (Japanese with optional English subtitles. No English dub.)
3.) A second BluRay disc with lots of bonus material.
4.) A drama CD that I'm pretty sure also includes cast commentary, but as with everything else, it's not in English and since it's an audio CD, well, I'm going to have to scour the 'net for a translation.
5.) Very nicely illustrated fold-out case for the discs.
6.) A T&B: The Rising Encyclopedia. Approx. 60 pages. Lots of gorgeous stuff in here, including character design illustrations from the movie and character bios as well as some full-page illustrations. Again, it is not in English except for some basic titles/headings and character names. There is also a text-heavy section in the middle that is, of course, not in English.
7.) A second booklet (abt 10 or 12 pages) that primarily contains a list of scenes illustrated by a small still from each one and what is probably a brief synopsis of the scene. Again, only the titles of the scenes are in English. There are also some character illustrations and whatnot as filler, and some full-page illustrations.
8.) Finally, there is a strip of four cells from the film. They're random (mine happen to be Kaede with Nathan/Fire Emblem) and come sealed in plastic wrap on a piece of gold cardboard backing. (They're not attached to the cardboard--just stabilized by a couple slits in the cardboard for the corners to fit in so they don't slide around.)

Language barrier aside, I couldn't be happier with this set. It's just as gorgeous to look at as the Hero Books and the other T&B extras that haven't been released in English. Since I actually saw this movie in a theater during its limited US run, the BluRay was a must.