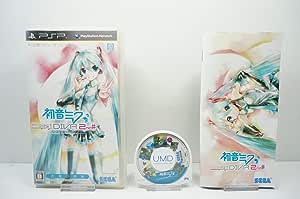 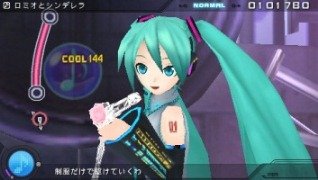 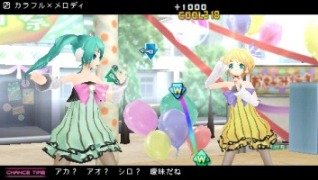 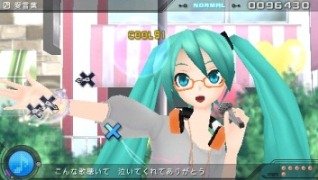 Kim
5つ星のうち5.0 Very fun and perfect for any Vocaloid fans!
2013年2月4日にアメリカ合衆国でレビュー済み
エディション: 通常版Amazonで購入
I bought this for my daughter who is a huge Vocaloid and Hatsune Miku fan, and this is what she wrote:

The game is simply awesome, it's completely in Hiragana/Katakana/Kanji but there is some English writing and it's easy to get around. The graphics are beautiful, and it's very challenging. Basically you play through the songs and every time you get a standard or higher on a song for the first time, the song clears and you get new songs. It's pretty difficult, so it makes you want to try harder which is always rewarding.

Project Diva 2nd features Hatsune Miku, Megurine Luka, Kagamine Rin, Kagamine Len, Yowane Haku, Akita Neru, Meiko, Kaito, Sakine Meiko and-Kasane Teto! The moment you start playing Miku, Luka, Rin, and Len are available but in order to get Haku, Meiko, Kaito and the others you have to unlock them by playing more. The starter songs include:

Another thing about this game I love is, Diva Room, or Miku Room. All you really do in it is stare at Miku, though. But Miku does some really adorable things in there. She usually just stands around swaying and reading music notes, but in my experience she often sits down at her table, drinks what appears to be sake, but could be her Popipo Vegetable Juice, and randomly sleeps in her bed. One time, I went in "Diva Room" to check on Miku and I found Rin just chilling out with her. Miku was panting and appeared to be exhausted, while Rin stood behind her with a disapproving look on her face, it was pretty hilarious.

On a more important note, it's a wonderful game and I recommend it to any fans of Vocaloid, anime, or just Japanese video games in general. It's a great mix of fun, cuteness, and difficulty to make it challenging and even addicting.

Jweg
5つ星のうち5.0 Insanely fun, especially if you are a fan of Hatsune Miku.
2015年6月15日にアメリカ合衆国でレビュー済み
エディション: 通常版Amazonで購入
It says 2nd on the picture, but this is actually the updated 2nd#, for those who are curious.

I've only had this game for a few days, but I've hardly put it down! The game is super-addictive if you're a fan of rhythm games, doubly so if you are a Vocaloid/Hatsune Miku fan. I only recognize a bit of hiragana, but I've had no issues playing it. Even if you don't know any Japanese, you won't have much trouble with this game... unless you try to play the Extreme difficulties while unprepared. =P

There are a whopping 46 songs to play. You start with only four, but clearing one song will unlock another and so on. Many song titles are in English (magnet, Just Be Friends, moon, etc...) or have distinct and recognizable symbols (like the club in Clover♣Club), so navigating through the song titles isn't an issue. If you're already familiar with the music in this game, you'll have an even easier time with both finding your way around and actually playing the songs. Each song has four difficulty levels; you start with Easy and Normal, and when you clear the latter, you'll unlock Hard. If you clear Hard, you'll unlock Extreme.

Clearing songs will also unlock modules for you to use, but you have to buy these with the Diva Points you amass. Higher difficulty levels will give you more DP. If you don't recognize any Japanese characters, it might be a little frustrating trying to pick a certain module for a song. Thankfully, there exists a Project Diva wiki which you can use for help with translating stuff.

I've been a fan of Vocaloid music for a few years now, but I'm just starting to get into the rhythm game genre. I'm migrating to 2nd after playing through Theatrhythm Final Fantasy: Curtain Call, and I have to say the difficulty here is far higher. However, I'm having a very fun time and in just a couple of days of playing this I'm already clearing the Hard difficulties. :)

Pepper
5つ星のうち5.0 All that being said I still love the game and the songs are devilishly catchy
2015年10月30日にアメリカ合衆国でレビュー済み
エディション: 通常版Amazonで購入
It loads really slowly on my PSP is probably my biggest complaint.
The diva room is disappointing if you're used to the new PS3 games. I can't really do much with it.

The game is entirely in Japanese, and you may have a hard time finding translations online.

The songs and music videos are really cute and enjoyable. Again, they might be a little disappointing in quality if you're used to the newer games, but they do the job for me since I don't have a console.

C. M. A.
5つ星のうち5.0 Best Miku Game
2013年12月17日にアメリカ合衆国でレビュー済み
エディション: 通常版Amazonで購入
In my mind, this is the best Miku game on any platform. The variety of music and modules is unmatched, and the note patterns and difficulty are well balanced across hard and extreme difficulty for most of the songs. The videos are a bit simplistic compared to modern Miku games, but this is understandable considering the age of the PSP.
続きを読む
役に立った
フィードバックを送信中...
フィードバックをお寄せいただきありがとうございます。
申し訳ありませんが、お客様の投票の記録に失敗しました。もう一度試してください。
違反を報告
レビュー を日本語に翻訳する

Wicket
5つ星のうち5.0 Great game
2013年7月18日にアメリカ合衆国でレビュー済み
エディション: 通常版Amazonで購入
What a fun game ~
The song selection is great. I love the fact that you can listen to them outside of playing a level. It’s fun being able to unlock out fits and customize the Vocaloids. Also the loading screen artwork is so cute !! I would really recommend this game to anyone who loves Vocaloid :) Great for long car rides :D
続きを読む
役に立った
フィードバックを送信中...
フィードバックをお寄せいただきありがとうございます。
申し訳ありませんが、お客様の投票の記録に失敗しました。もう一度試してください。
違反を報告
レビュー を日本語に翻訳する

DrCruse
5つ星のうち5.0 Fantastic!
2012年9月23日にアメリカ合衆国でレビュー済み
エディション: 通常版Amazonで購入
If you're a fan of Miku, Vocaloid, or Rhythm Games in general, this game is a superb choice. All the songs are excellent and every single song has a spectrum of four difficulty levels for the beginner and expert alike. If you don't know Japanese, some of the gimmicky features of the game such as the "Diva Room" will be difficult to use, but the songs (the main attraction of the game) will still be very easy to play. The only problem I had with the game is that the final song on the hardest difficulty is unbelievably, absurdly difficult. I have played over 400 games to some extent over dozens of consoles over the last decade, and this song is probably among the top 3 most difficult challenges I've ever seen in any game! The minor frustration caused by that one song doesn't overshadow the awesomeness of the rest of the game though. I highly recommend it to anyone who owns a PSP.
続きを読む
2人のお客様がこれが役に立ったと考えています
役に立った
フィードバックを送信中...
フィードバックをお寄せいただきありがとうございます。
申し訳ありませんが、お客様の投票の記録に失敗しました。もう一度試してください。
違反を報告
レビュー を日本語に翻訳する