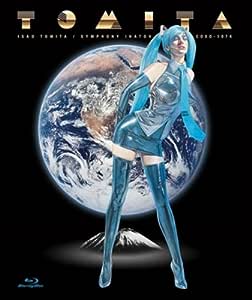 S. Maxey
5つ星のうち4.0 An ambitious musical puzzle. I'm still unsure whether it all comes together or even works, but enjoy exploring it
2016年6月9日にアメリカ合衆国でレビュー済み
Amazonで購入
Watching the orchestra and large choral forces perform this with Hatsune Miku helps make the work seem less foreign. I don't understand Japanese, so I have no idea what the singers are saying (I wish there was an English translation or English subtitles available).

My reactions to the work itself remain mixed. I still admire the fact that in his 80s, Isao Tomita was trying something entirely new, using the projected digital virtual pop singer in a more classically oriented composition. Using sounds and techniques from Western music as well as Japanese music to tell a fantastical story. That said, I'm not sure the entire work coheres. Tomita's obituary in the New York Times told how at the age of 10 he was suddenly exposed to the full range of western popular music styles, where before that, the radio had played only Japanese military music during the war. To have all these different sounds and techniques and genres and styles suddenly streaming out at you one after another must have been an amazing experience for the young musician. I thought of that story often as I listened to the Symphony Ihatov, thinking "this section sounds a lot like the Russian composers, this section sound very German, very Kurt Weill influenced, this next section sounds like something from a 1950s Hollywood film score," etc. There were all these sounds and techniques and genres sort of glued together, and I'm still not entirely sure how they all fit into a coherent whole--if indeed they do.

It feels at times more like a puzzle to be figured out than a sustained composition to be explored.

Yes, the disc plays on US Blu-Ray players.