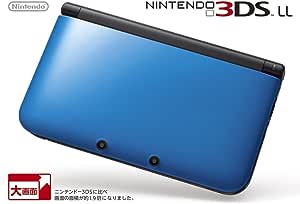 Beadybass
5つ星のうち4.0 Great working console, arrived before expected!
2019年5月29日に英国でレビュー済み
カラー: ブラックAmazonで購入
My 3DS LL came in great condition with a stylus and USB cable- sadly no SD card but that’s not a big issue since I’m going to just be playing physical cartridges.
The console itself is great- the same as the regular 3DS XL and very similar to the NEW 3DS XL models, with the only differences being this model is slightly bulkier and heavier, but not by much.

It works perfectly and plays Japanese 3DS games as well as NDS games from anywhere in the world, like any other 3DS console. However, be warned that you can’t change the language, as it is locked to Japan. If you know or are learning Japanese, this isn’t an issue, and it’s easy to navigate even without great language skills.

A great buy if you’re sick of the lack of localization when it comes to a lot of Japanese exclusive 3DS titles.

Ashley M
5つ星のうち5.0 Overall good product!
2016年6月29日にカナダでレビュー済み
カラー: ブラックAmazonで購入
Received my 3DS LL today, placed my order one week ago - so shipping took one week (expedited). Product was clean and works like new - missing stylus but luckily I had an extra. No SD card so you'll need to supply your own.

There is a small mark/piece of dust/dead pixel in the middle of the screen (circled in red) that I haven't been able to remove - luckily I'm not too picky about that but some people find those annoying so I figured it was worth mentioning.

Overall very happy with the product for the price, now I can play Fire Emblem Fates in Japanese :) ありがとうございます

Red
5つ星のうち1.0 Beware of Missing Info
2016年12月27日にカナダでレビュー済み
カラー: ブラックAmazonで購入
This was a total disappointment. The item only works in Japanese and cannot be changed as there is no language setting on the device. No where on the website does it indicate this.
続きを読む
役に立った
フィードバックを送信中...
フィードバックをお寄せいただきありがとうございます。
申し訳ありませんが、お客様の投票の記録に失敗しました。もう一度試してください。
違反を報告
レビュー を日本語に翻訳する

JustAnotherCustomer
5つ星のうち5.0 CUTE.
2014年7月16日にアメリカ合衆国でレビュー済み
カラー: ミントXホワイトAmazonで購入
It is such a pretty color and works just as well as any other ds. I HIGHLY recommend you can read and understand Japanese before you purchase this though...considering this IS a JAP console. It cannot change language into English.
f.y.i. - If you order between May and September you should receive a code for a free game from Nintendo.

Brooksie
5つ星のうち5.0 The joy stick is a little stiff
2017年7月16日にアメリカ合衆国でレビュー済み
カラー: シルバーXブラックAmazonで購入
It came in a few months before the scheduled date, and I wasn't able to leave a review until now since Amazon said it was still "in route".
Nonetheless, the DS works perfectly for a used item. There are some scratches naturally, but it's actually barely noticeable. The joy stick is a little stiff, but it DOES work, and it's actually pretty minor since I rarely use the joystick anyway. Over all I am very happy with the purchase! 😊

Toast
5つ星のうち5.0 Renewed my love for gaming
2014年9月23日にアメリカ合衆国でレビュー済み
カラー: ミントXホワイトAmazonで購入
Though I was hesitant for years to purchase a 3DS, this has quickly become my current go-to gaming console (not just amongst handhelds!). There are no problems with registering a US-based debit card (***Note that if you plan to use Nintendo Prepaid Cards, they only work with a 3DS system from the same region!***) for Japanese eShop use, and the eShop itself offers a large library of games to choose from. Coupled with sales/deals offered fairly frequently, it becomes a very convenient way to play many different games without paying for overpriced physical copy imports. Though digital downloads used to be tied to the device itself, they now pair with your NNID which makes it much easier to retrieve your downloads in case your device breaks or is stolen. The account system still isn't as convenient as PSN, Steam, etc. but it is an improvement.

The only language offered is Japanese, so if you cannot understand it you may need to look up a guide to get you through the initial setup, which includes parental control settings that could temporary hinder eShop and internet usage. As stated in the description, it will only play Japan-region enabled games and does not come with a charger. The North American charger works fine with it, though I can't speak for Europe or elsewhere. As far as backwards compatibility is concerned, since normal DS games were not region-locked, they work on a 3DS of any region. The exception to this is certain DSi/DSi enhanced games that were released with region locks in place.

I had reservations due to my small hands, but found the LL system much more comfortable to hold than the original. The rounded edges mean no harsh corners digging into your palms, and the stylus has been moved to the right side of the device for added convenience... if you use your stylus with your right hand! The large screen really helps to immerse you in your game, and the hinges have three positions they'll lock into to hold the upper half of the clam shell up. I don't play with the 3D on regularly, but I do use it once for any new games I get just to see what it looks like. It can be a little difficult to angle it correctly to keep the ideal viewing position while playing, but as I'm not a fan of 3D itself, I can't say much more about it.

The touch screen appears to be very scratch-resistant-- over 210 hours of heavy stylus use in Theatrhythm Curtain Call and not a single scratch on it. That being said, I notice that dust and debris has a tendency to get stuck around the edges of the touch screen so I do clean it semi-regularly with a microfiber cloth. The LL also appears to have remedied the issue the original 3DS had, where the touch screen frame would imprint itself on the upper screen when kept closed with light pressure.

For me, the only real cons about the device itself is that the coloured part of the housing, though beautiful, does get scratched fairly easily. There are many affordable protective casings available on Amazon if you're particular about that sort of thing. The other thing to note is that the volume itself isn't very strong even while turned up to max.

Overall, I was beyond pleasantly surprised with the 3DS LL, along with its selection of games. I think it's an amazing addition to your gaming collection if you know Japanese and enjoy playing the games in their original language, or want to enjoy region exclusives. I would like to add that the New 3DS is launching soon in Japan, so if you're already considering buying an imported model, you should compare the two and see if the newer model better suits your needs!

Fabiola Bois
5つ星のうち5.0 Not disappointed at all!
2014年4月9日にアメリカ合衆国でレビュー済み
カラー: ピンクXホワイトAmazonで購入
I ordered this March 7, it was shipped out on the 17th, and I received it on the 19th! I was absolutely shocked at how fast it was delivered to me since I wasn't expecting it until the next month! It was securely packaged, and exactly what I wanted! A charger is not included as stated, it accesses the Japan EShop only, and it will only play Japanese games! Apparently, the EShop accepts foreign credit cards, but I haven't been able to buy anything. At the same time, I cannot read Japanese kanji. I'm in the process of learning the language, and got this 3ds to keep me motivated! Anyway, I HIGHLY recommend shopping with Galaxy Japan!
続きを読む
役に立った
フィードバックを送信中...
フィードバックをお寄せいただきありがとうございます。
申し訳ありませんが、お客様の投票の記録に失敗しました。もう一度試してください。
違反を報告
レビュー を日本語に翻訳する

Timothy Kesson
5つ星のうち5.0 Bigger Is Way Better
2014年3月9日にアメリカ合衆国でレビュー済み
カラー: ブラックAmazonで購入
I bought the japan import to teach myself Japanese through Animal Crossing. (Doubutsu no Mori)
For my big adult hands the LL feels way more comfortable and the big screen is great for trying to read the small characters.
I have an english regular 3ds for english Animal Crossing and over time my hands do start to hurt.
Things like longer battery life is just a bonus to this already great system.

I bought black because there are some great covers to make it more cosmetically appealing. They don't protect it much but any color will always match black. And it's a lot cheaper and easier than trying to get your hands on a limited edition ds.

If you don't already know THE GAME HAS TO MATCH THE DS' REGION. You can ONLY play JAPAN games on a JAPAN 3DS. This goes with the english ds as well.

85cmpersecond
5つ星のうち5.0 Perfect
2014年1月29日にアメリカ合衆国でレビュー済み
カラー: ピンクXホワイトAmazonで購入
This Japanese 3DS arrived in perfect condition!
Do note that it does NOT come with an AC adapter, so you'll have to order one of those separately. It does charge with the American 3DS' AC adapter though, so if you have one of those, you're set. Otherwise, the adapter is a pretty quick $10 buy at most local game stores.
Also note the region lock; you won't be able to play US/EU games on this device, and you can only access the JP eStore. As of today, US credit cards do work on the JP eStore though, so that's always an option. Definitely recommended if you're interested in playing Japanese games!
続きを読む
役に立った
フィードバックを送信中...
フィードバックをお寄せいただきありがとうございます。
申し訳ありませんが、お客様の投票の記録に失敗しました。もう一度試してください。
違反を報告
レビュー を日本語に翻訳する