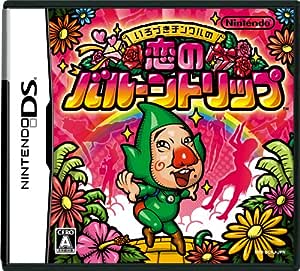 Belial
5つ星のうち4.0 IMPORTANT - READ THIS BEFORE BUYING...
2015年5月30日に英国でレビュー済み
Amazonで購入
Finally got this one, as I am a Huge Zelda fan, so seeing that there were a couple of direct Spin-Offf games based on one of the characters from the Zelda series (This one, and another one called Tingle's Rosy Rupeeland), I was naturally very keen to buy them both. However, there were a few things I was unsure of before buying these that I'm sure many of you were wondering just as I was before I bought these, so I am going to try and help out by explaining a few important things you should know about them...

In case you were wondering, both are completely different games, and both use the same graphics and gameplay engine.
Tingles's Rosy Rupeeland you can play completely in English, and is a great game to play. (Have finished it and loved every minute of it), but the Tingle's Baloon Trip of Love (the game on this listing) was only ever made by Nintendo in Japanese, so no other language versions of this game were ever made in any other language anywhere in the world, so is only worth having if you just want your Zelda collection complete, but you will be disappointed if you were actually hoping to play it) .

I should point out though, that there are a group of people on the internet currently working in a translated guide for this game (they are calling it the tingle translation project, so if you're as keen as I am to actually play this game, then please show them your support.

I should also note that the artwork on the game case is beautiful, -Comes in like a sparkly holographic box, so still worth having if you want your Zelda collection complete. (I still don't regret buying this for that reason, and I didn't want to downgrade the stars on this review because I heavily want to express my interest in this game in the hope that Nintendo someday brings this out in English) But if you're actually looking to play one of Tingle games straight away though, and like me do not speak Japanese, do not go for this one, go for the Tingle's Rosy Rupeeland game instead, as that one plays perfectly in English, ad is a really addictively good game!

Hope this review has helped you, and if you also felt like me that you would like to see this game made in English, then vote this review as helpful so that the world can see just how many people would have had interest in this game! (you never know, Nintendo might do it if they can see we would love to play it!)
続きを読む
2人のお客様がこれが役に立ったと考えています
違反を報告
レビュー を日本語に翻訳する

Gabriel Blanco
5つ星のうち5.0 An excellent game with off brand humor
2020年11月30日にアメリカ合衆国でレビュー済み
Amazonで購入
I love games with personality and if you know anything about this game or Rosey Rupeeland you know that is most of this game’s appeal. The gameplay isn’t much to speak about but the decidedly irreverent, Japanese humor, and the graphics make his a home run (at least for me). As someone who does not know Japanese, I’m probably missing a lot having a translator as a go between but the physical humor is plenty cool. It’s a 2D looking game, and as I’m writing this it is 11 years old but, the graphics are great. I think many people underrate games that use however many limited “bits” to create what looks like a cartoon (Earthworm Jim, early Kirby). Definitely a hidden gem that may not be for everyone but, if you’ve played Rupeeland, check it out.
続きを読む
違反を報告
レビュー を日本語に翻訳する