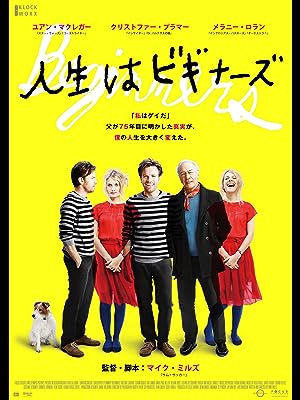 By placing your order or playing a video, you agree to our Terms of Use. Sold by Amazon.com Sales, Inc.
|
Send us Feedback | Get Help

Stewie
5つ星のうち5.0 50 shades of sadness
2014年5月9日
形式: DVDAmazonで購入
Do NOT be mislead by the romance / comedy tag - this is not a romcom in anyway.

It is an unremitting look at grief, loneliness and regret in their many guises through the lense of one man processing his 75 year old father both coming out as gay and dying of cancer.

However, it is not a melodramatic weepie either - all the emotion is underplayed and partly repressed. As the dog 'says' at one point - they are drowning in sadness.

I became quieter and quieter as the movie went on but am still thinking about it weeks later.
続きを読む
2人のお客様がこれが役に立ったと考えています
役に立った
コメント 違反を報告
レビュー を日本語に翻訳する