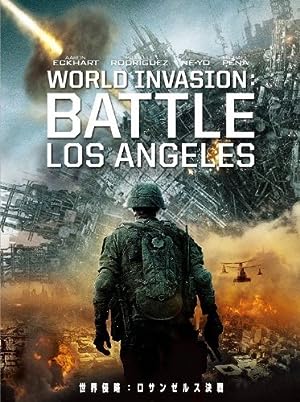 Milt M. R. Ingarfield
5つ星のうち4.0 Battle: Los Angles (Blu-ray version)
2014年4月10日に英国でレビュー済み
Amazonで購入
Directed by Jonathan Liebesman Battle: Los Angles our storyline finds planet Earth being bombarded globally by meteor showers which turn out to be a cover for an alien invasion force that land off the coast of all major cities and one of the last to fall is Los Angles the squad of marines sent to retrieve civilians from a suburb is headed-up by soon to be retired Staff Sergeant Michael Nantz played by Aaron Eckhart who has previous played in big budget productions such as "The Dark Knight" and later in the tale renowned all round action girl Michelle Rodriguez known for appearances in movies such as "Avatar" and "The Fast and the Furious" franchise makes an appearance, this film does not have anything original in its running time of 116 minutes but what it is a very entertaining popcorn flick for a Saturday night with a good surround sound system and understanding neighbours Gun-ho!

This 50 GB region free disc is encoded using MPEG-4 AVC codec in full 1080p resolution and in 2.40.1 aspect ratio it also comes in living room shaking English DTS-HD Master Audio 5.1 and Thai Dolby Digital 5.1 the audio track delivers the sound of the battlefield with all its bass heavy explosions and the gunfire from machine-guns and other heavy ordinance along with the military vehicles to the energy weapons of the aliens and their dying gurgles with great effect.
The package comes with a good selection of subtitles which are as follows:- English, English for the hard of hearing, Greek, Hindi, Korean, Mandarin (Simplified) Mandarin Traditional, Thai.

The Special Features are as follows: - Behind the Battle, Aliens, Preparing for Battle, Creating L.A.
The Blu-ray comes with exclusives which are as follows directing the Battle, Command control Command your experience by watching picture-in-Picture and more during the movie, Boot Camp, The Free-way Battle.
続きを読む
違反を報告
レビュー を日本語に翻訳する

Haigh Morcambe
5つ星のうち3.0 Too much hand held camera spoils the effect.
2020年11月11日に英国でレビュー済み
Amazonで購入
A movie with a good deal of action and excitement, but I found the jerky, hand held camera technique very difficult to work with. It is so distracting and frustrating, especially when the other elements of the film are so admirable. As an action movie, no problem! As a viewing experience, very disappointing.
続きを読む
違反を報告
レビュー を日本語に翻訳する

Darth Maciek
5つ星のうち4.0 ET go home - in a plastic bag! Retreat, hell! Hurrah!!
2011年5月2日に英国でレビュー済み
Amazonで購入
This movie looks much more as a sequel to "Blackhawk down" than another "War of the worlds", but this is exactly what I liked in it. When the invasion of Earth begins, the US Marines do not ask many questions about the motivations of invaders or the sense of life in general - they just grab their weapons and start shooting back. And they give a great show!

There is a relatively short introduction, in which we get to know soldiers from the Marines platoon we will follow, but after that it is the non stop battle. Action is made of numerous marches and engagements, interrupted just for short stops to regroup, catch breath, drink some water, tend to the wounded and find more ammo. Fighting is very well filmed and looks quite a lot like in "Blackhawk down". The gunfights are quite realistic and the Marines are far from super heroes - they use quite a lot of munitions to kill every enemy trooper, they make mistakes, they sometimes fall when running, they get lost in the labyrinth of ruined city, their only machine gun jams in the cloud of thick dust, etc. The butcher bill is heavy and many characters will not make it to the final credits.

Contrary to many other alien invasion movies, in this one the invaders seem to be absolutely desperate and their attack seems to have been hastily prepared and even largely improvised. Frankly, I believe it was a good idea, as it makes the whole plot credible - otherwise, if they have the secret of interstellar flight, why couldn't they just wipe us safely from the orbit (or at least destroy all our significant defence installations)? But clearly they are in an incredible hurry and they had to do fast and with what they just had at hand right now, rather than carefully plot the invasion. Also, alien invaders, their engines and their weapons look really alien - there is almost no similarity with anything earthly.

As for their motivation, at one moment we are told that they are after Earth's water, but that is clearly ludicrous as once you got the interstellar travel technology there is enough water in the space in places where there is absolutely no opposition. Aliens seem however able to use water in ways we still did not discover and as they can bring only a limited quantity of supplies with them, they depend heavily on local water to fuel the invasion. May be it will be better explained in the sequel, if there is one.

This is in large part a one man show, as the central character of Staff Sergeant Nantz gradually takes over the action. This is I believe the greatest role Aaron Eckhart played until now and he is very credible in it. It certainly took a great effort on his part - if you saw him in "Thank you for smoking", you will simply not believe that it is the same actor! Michelle Rodriguez, who appears in the middle of the movie, plays the only woman soldier we see in the battle - her character, Sergeant Elena Santos, is an electronic intelligence technician who was separated from her unit and joined the first friendly group she could find. Other actors are also doing well, but their characters mostly follow the leader.

Being very fond of war and SF movies, I must say that I was delighted by "Battle Los Angeles" and I do intend to buy the DVD when it is available. And I certainly hope for a sequel - in fact I would be very pleased if it could become a franchise showing the whole history of this war, until the day we chase this space scum to their home planet and dictate them conditions for surrender!
続きを読む
4人のお客様がこれが役に立ったと考えています
違反を報告
レビュー を日本語に翻訳する