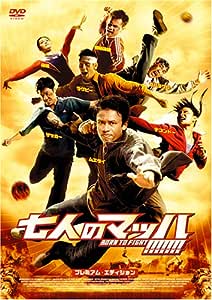 david wiz
5つ星のうち4.0 this is the panna from 1986 not the 2004 with dan chupong
2012年6月22日にカナダでレビュー済み
Amazonで購入
ey guys, amazon made a mistake in this solicitation. the box says panna rittikrai born to fight and this is that movie from 1986 its not the one from 2004 which features dan chupong. on the credits it says dan chupong in this movie but hes not.
続きを読む
違反を報告
レビュー を日本語に翻訳する

A. Stana
5つ星のうち5.0 next big thing
2007年2月19日にカナダでレビュー済み
Amazonで購入
If you like Tony Jaa, Dan Chupong is the next great fighter to come out of Thailand and is six years younger than Tony Jaa. There is more than enough action to satisfy anybody. The movie starts with a bang and second half of the movie is all action.
続きを読む
違反を報告
レビュー を日本語に翻訳する

Ali
5つ星のうち4.0 Eastern Action Powerhouse
2019年2月27日にアメリカ合衆国でレビュー済み
Amazonで購入
This is a classic martial arts actioner from the "old school." in other words; no CGI gimmicks that make you think the actors are more skilled than they really are. Everything you see herein is real, and it is impressive. Martial Artist Somrak Khamsing was a Muay Thai fighter and Olympic Gold-metal winning boxer. The movie's lower budget only add to the gritty style, and creates an added level of realism. I just wanted to praise this dvd from 'Dragon Dynasty' for including the original Thai language audio. They understand that some people actually want to hear the original language, and the real voices of the actors. That greatly adds to the experience of watching a movie like this, as the viewer feels more immersed in that country's culture. Fans of "Ong-Bak" and "Merantau" will definitely like this one.
続きを読む
1人のお客様がこれが役に立ったと考えています
違反を報告
レビュー を日本語に翻訳する

Darth Vegas
5つ星のうち4.0 The Dragon Dynasty "Born to Fight" (not the 1986 original)...
2011年3月14日にアメリカ合衆国でレビュー済み
Amazonで購入
I'm not sure why Amazon insists on linking the reviews of all the movies with the same title -- since there are often many releases of the same movie (often, of very different quality and with different features), and in this case, entirely different movies with the same name, how the hell do you know what movie is really being reviewed?

Having gotten that off my chest, I really liked this newer "Dragon Dynasty" release. You can smell the "Ong Bak" influence all over it -- so much so that you really wonder why they didn't just cast Tony Jaa in the lead (hell, even the lead henchman in "Ong Bak" is the lead henchman in "Born to Fight"!). Story is nothing special, though I found it surprisingly heartbreaking at times (though it does take the cheap and easy route to identify who is very good and who is very bad -- with one notable exception, who could have been better developed -- the character "Tub").

What you really watch this for is, of course, the stunts and the fighting. The latter wasn't anything special -- again, there are many nods to "Ong Bak" (and some direct ripoffs from fights in that movie). What sets the movie apart are its numerous jawdropping stunts. You are left to wonder how anyone didn't die making this movie. Often, I jumped back while watching this, yelling "ouch!" and "ohh!" You will too!

The things I were least impressed with were some of the acting, some of the silly fight parts with the soccer balls (you really have to suspend disbelief, though they 'are' entertaining), and the badly done CGI (you'll know what I mean).

This, like many other recent Thai action movies, does stand in the shadow of the mighty "Ong Bak" and "The Protector," but it 'is' a very entertaining movie -- one you'll want to watch with friends, so you can all go "Ouch!" together. Some violent bits but no real gore (unless you count the bazooka-Rambo bit near the end). Kudos to the stuntpeople and fighters (many of whom are the actual actors in the movie) -- I wouldn't want to be you!
続きを読む
1人のお客様がこれが役に立ったと考えています
違反を報告
レビュー を日本語に翻訳する
すべてのレビューを参照します
Amazonプライム会員ならお急ぎ便、日時指定便が使い放題
さらに、映画もTV番組も見放題。200万曲が聴き放題 。クラウドに好きなだけ写真も保存可能。
> プライムを無料で試す