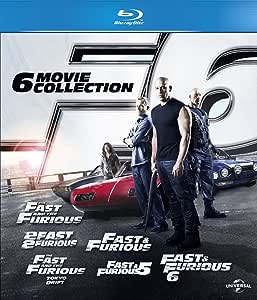 Mr The Beard
5つ星のうち4.0 A Brilliant Value Collection of a Great Series
2015年1月15日に英国でレビュー済み
形式: Blu-rayAmazonで購入
Fast and Furious came about when boy-racer-ism was at its highest and preceded the likes of Need For Speed: Underground which marked an important date for street racing culture.

Fast and Furious: The early roots of the series where we follow a cop - Brian - who is looking to infiltrate and arrest a gang of criminals stealing goods from trucks. The first entry in the series focuses a bit more on street racing than the rest of the series.

2 Fast 2 Furious: Dropping one of the leading actors - Vin Diesel - 2 Fast 2 Furious introduces us to one of Brian's friends, Roman Pearce. Working for the police once again, Brian and Roman need to infiltrate and arrest a drug baron and his ring. To do so, they aim to become his drivers - tasked with beating other two-man teams to getting the job. This is where the focus of the series starts to stray from underground racing and becomes more about the criminal underground.

Fast and Furious Tokyo Drift: As if just to make me contradict myself, Tokyo Drift takes us back to street racing - if only for a fleeting moment. We follow a new protagonist - Sean Boswell - who is sent to Japan to live with his father after causing too much trouble in the US. Given his love of cars and street racing, it's only a matter of time before he thrusts himself head-first into the world of underground Tokyo. The difference being that this isn't just normal street racing, this is drift. Through a series of events, Sean ends up intertwined with a criminal ring and has to walk a fine line to stay out of trouble.

Fast and Furious 4: We return to Brian and Dom - Vin Diesel - and Dom has upped himself, taking on much bigger gigs than stealing electronics. Brian, working for the police, has been tasked with taking down a much bigger drug baron than he faced before and through a series of events, Dom is also targeting said drug baron - But Brian and Dom aren't necessarily on the same side in all of this.

Fast and Furious 5: Following the events of Fast and Furious 4, Brian has left the police force and Dom has a plan. Marking what could be the end of his life of crime, Dom enlists a crew to do the impossible - Steal 100 million from Reyes. But they're not just going to drive in and shoot up the place - Dom got a hold of the location of the money and has a plan, this is going to be a heist.

Fast and Furious 6: Dom is met with a ghost from the past and will do anything to get them. The problem is, this ghost from the past has no memory and is working directly under a new criminal - Shaw. Shaw has taken crime to a new level and incorporates technology into everything he does. He has eyes and ears everywhere and Dom looks to be outmatched. Dom gets a crew together to attempt to take down Shaw and get to the ghost.

The series gets off to a somewhat B-movie-ish start as the first two movies use a lot of cheap special effects, but as the series progresses it becomes apparent that this is a really great movie series and especially Tokyo Drift, 4, 5 and 6 which were directed under Lin - who seems to absolutely adore the series - the quality shows.

One problem with this box set in particular is that the discs for Fast and Furious 5 and 6 don't have any numbers on them and - in my case - were reverse positions from what all four of the other discs were. To make things a bit easier for you if you are unsure: 5's disc has one car on it, 6 has many.

5つ星のうち5.0 Great box set, great movies. Stunning quality.
2017年4月2日に英国でレビュー済み
形式: Blu-rayAmazonで購入
For the price, I was very surprised I can get such a good box set. The set consits of 3 Blu-ray cases with 2 discs (2 films) inside each of them, bundled together in a slip case. But they don't have that cheap feel to them. The cases are very solid and also the slip case Is well made.

To the movies now, for fans of the series, get this Blu-ray box set, the older movies look stunning on Blu-ray, the new ones of course look even more stunning. Also, the price for all 6 movies and is great. Totally worth getting.

M. Britton
5つ星のうち5.0 Awesome set of ALL six movies in one set on blu ray! The ONLY way to watch and hear these movies.
2013年9月27日に英国でレビュー済み
形式: Blu-rayAmazonで購入
This is one nice package of movies. All six Fast and the Furious movies (even Tokyo Drift...ugh!) in one marvelous set on six (region free) blu rays! Each movie (with its special features) gets its own disc (so no nasty compression problems when cramming two movies on one disc). There are three plastic cases (housing two discs each) that slide into a nice outer box. To be honest, most of these I have on US blu ray. I just wanted #6 since it has NOT been officially announced for release here in the states (I hear around Christmas), so I splurged and got all six in one package! And these movies are what blu ray was meant to be! The 1080p transfers on all look amazing and the lossless DTS-HD Master soundtrack really tests your subwoofer. Just VERY disappointed Universal did not release the sixth one in the new 7.1 instead of the standard 5.1 (most newer Universal titles are being released with 7.1 surround track). Plus the sith one comes with an extended version (only a few minutes longer, though).
Glad these are just the blu rays and not with the DVDs too. That is the norm here in the states. Who would want that? I love blu ray too much to have to go back to the DVD version.
This is one amazing set of some really good action movies. Cannot wait to see the seventh installment!

As other Reviewers have said (so I won't repeat), only three of the films (Fast & Furious, F&F 5 and F&F 6) have Vin Diesel and Paul Walker in them and these are the best out of this set. Not to say the other three aren't very watchable - they are - but the obvious chemistry between Walker and Diesel plays out very well on screen and brings an integrity to the films which are, quite literally 'sit on the edge of your seat' thrill-fests..

Nice to see there is actually a 'story' running through the film with a beginning, middle and high-octane ending - not all 'action' films have that - and for car enthusiasts, it's Nirvana!

Don't waste your time reading any more reviews - just order the six-pack (boxed set), settle down and prepared to be thrilled.

Dr. Nigel D. Miles
5つ星のうち4.0 Good for fantasy and technical competency as films.
2014年6月26日に英国でレビュー済み
形式: Blu-rayAmazonで購入
I was only interested in four/six "films" personally with Vin Diesel and Paul Walker...who the later was, sadly the most strikingly good looking actor which the USA has produced in the last twenty years...but that is my own opinion as a photographer and with no deeper feelings!

These films are all to make us wake up and say "Bazinga" when you are feeling down and want a bit of adrenaline to move your feelings to a higher plane! But do not take them seriously. The feelings of "family" by Van Diesel are a nice touch considering the rest of the storyline; with the Rock joining the last two films and the usual suspects of interacting hotshots with their own characters brings a bit of zing to the films. Well done..But do not take then seriously when the CG I and technical guy/girls do their jobs well.

wellard
5つ星のうち5.0 Brainless, fast fun.
2019年6月20日に英国でレビュー済み
Amazonで購入
Great value. Cheaper than the DVD - how can this be!
These films are a cliché in petrol-headed men and women, hot chicks for the guys to drool over. Paul Walker for the women to drool over........and lots of fast driving. Brainless and fun

Danny R
5つ星のうち5.0 Absolute bargain for 6 films..
2019年7月16日に英国でレビュー済み
Amazonで購入
Never watched although I already own a few steel books as I collect, decided to watch from start and this was a steal for a little over 7 quid..
続きを読む
役に立った
フィードバックを送信中...
フィードバックをお寄せいただきありがとうございます。
申し訳ありませんが、お客様の投票の記録に失敗しました。もう一度試してください。
違反を報告
レビュー を日本語に翻訳する

TheNavvie
5つ星のうち4.0 Great set, shame there is a problem with sixth disc.
2015年4月23日に英国でレビュー済み
形式: Blu-rayAmazonで購入
Love this series, however there seems to be a problem with the pressing of the sixth film in this set.

Fast and Furious 6 stutters and the audio drops out just before the hour mark on my Sony and Samsung blu-ray players, as well as my PC with PowerDVD.

I bought my box sets in March and April 2015, since I can't see any complaints in the reviews below I guess earlier pressings don't have a problem.

bradleyofthenorth
5つ星のうち5.0 Speeding past fast and furiously!!
2015年2月9日に英国でレビュー済み
形式: Blu-rayAmazonで購入
Fantastic collection and I can't wait for the next and possibly last instalment of the franchise. If you've seen even one of these films, you'll know how much action is in these films, I feel completely worn out! Though saying that, I don't think I should have watched them back-to-back but they are really addictive to watch them all. The Blu-ray edition of these is a lot better as well as the clarity and smoothness of the images is much clearer.
続きを読む
役に立った
フィードバックを送信中...
フィードバックをお寄せいただきありがとうございます。
申し訳ありませんが、お客様の投票の記録に失敗しました。もう一度試してください。
違反を報告
レビュー を日本語に翻訳する

Nook
5つ星のうち4.0 Awesome films......a must see/buy
2016年3月19日に英国でレビュー済み
Amazonで購入
The films themselves are awesome. I know I'll watch them over and over. Love the fact I own them now. Marked it down because I'm disappointed the outer box is scuffed, dented in several places. It must've been like this before posting as amazon packaging is v comprehensive. Plus I ordered several films so there was no room for it to move about in transit.
続きを読む
役に立った
フィードバックを送信中...
フィードバックをお寄せいただきありがとうございます。
申し訳ありませんが、お客様の投票の記録に失敗しました。もう一度試してください。
違反を報告
レビュー を日本語に翻訳する
その他の国際レビューを読み込む

5-6 has only English audio and english Subs :)