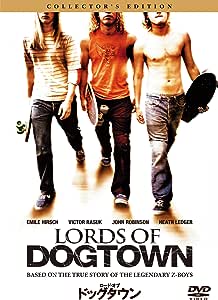 Throda tzen
5つ星のうち4.0 “I don’t want my son to be a dip-stick” (Dad -opening titles)
2020年12月20日に英国でレビュー済み
Amazonで購入
Lords of Dogtown is a 2005 American semi- biographical teen drama film following a group of young surfers in Santa Monica, California during 1975-77 who turn to skateboards. A film of three parts, the first half charts the boys backgrounds and rise as they form a skate team but as their fame grows, will the camaraderie survive the lure of money, fame and girls.
I have no interest in skateboarding and in the first half hour I almost switch off believing this to be a weak parody of ‘Thirteen’. How wrong I was. This turned into a multifaceted look at friendship -warts n’ all.
A box office flop (it made barely half its production cost) the single disc opens to an anti piracy ad, then a screen offering play, introduction by the director, audio set up (English or French) subtitles (various English options, 2 French options and Arabic, Hindi and four Scandanavian languages.) scene selection, extras (commentary on/off, making of, cameos, deleted scenes, featurettes, gag reel, storyboard comparisons, music video, trailers). Featuring drugs, swearing, sex, violence and adult themes (but no nudity) it’s not family viewing. Things to look out for: Has flashing screen menu and slow cut to intro scenes. Some excellent period music and lots of cameos by then unknown actors.
Overall a good **** but just misses out on top marks as parts seem overly cliché -even for the time period but deserves to be watched -especially if you want something out on left field.
続きを読む
違反を報告
レビュー を日本語に翻訳する

John McAulay
5つ星のうち5.0 Dogtown is awesome
2017年9月21日に英国でレビュー済み
Amazonで購入
Great film. Tells the story just like Dogtown n Z Boys. Awesome. Watch both to appreciate these guys and how they invented skateboarding as it is today. Anyone who loves skateboarding will love this. Awesome is the only way to describe it.
続きを読む
違反を報告
レビュー を日本語に翻訳する

AniLoves
5つ星のうち5.0 simply the best!
2010年12月20日に英国でレビュー済み
Amazonで購入
I really love this movie! I love everything 70s and Catherine really brought that 70s feel to life, the actors were right on spot and i could see they did a lot of research into the characters they were portraying! What i loved about this movie is that you don't have to be into the skateboard scene to love it, it has an awesome storyline and beautifully shot, a really radical soundtrack which i bought too! It's definitely a must see! Watch out for Heath Ledger and Emile Hirsch they're performances were great, and it only helped be fall even more in love with Emile!!
続きを読む
1人のお客様がこれが役に立ったと考えています
違反を報告
レビュー を日本語に翻訳する

Paul Stevens
5つ星のうち4.0 Skater boy
2016年3月28日に英国でレビュー済み
Amazonで購入
A dramatised version of documentary Dogtown and Z-Boys (which you should order right now). Very evocative of the era and faithful to the original story. Heath Ledger steals the show, but the skaters and the skating are the real joy of this film.
続きを読む
違反を報告
レビュー を日本語に翻訳する