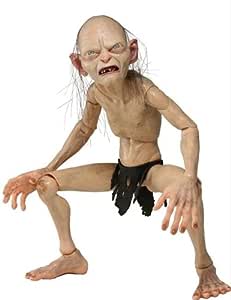 Reggie H
5つ星のうち5.0 It burns! It freezes!
2016年2月17日 - (Amazon.com)
Amazonで購入
Gollum is very cool looking, and his menacing scowl perfectly matches his persona. While you can see his arm and knee joints, they don't stand out as much as with some other action figures, ruining the appearance. I do wish he was posed just like in the picture, but instead he is facing straight ahead, but still crouched with arms slightly bent. The scraggly strands of hair really set it off, and if I didn't want to open the package and diminish his value, I'd possibly let him wear The One Ring (Lego) that I bought. As it stands, I have him and Bilbo but I didn't count on the fact that both of them would have taped seals on their lids, so I can't open the boxes to give either of them the ring. Oh well, first world problems.

I'd like to add that I had this item on my wishlist for many months, maybe a couple of years and I watch my list every day for price changes. One that one glorious morning, I noticed that the price had unexpected dropped to 20 bucks, so I immediately ordered it. I wish now that I had bought 2 or 3. I doubt that will ever happen again and I wonder if it was a mistake, but whatever the reason for the temporary price drop, at least the seller honored the purchase.
続きを読む
レビュー を日本語に翻訳する

Valencia Artist
5つ星のうち5.0 A Great Figure!
2017年1月5日 - (Amazon.com)
Amazonで購入
such an awesome figure. Way taller than I imagined - 10" height - I guess I missed that in the description... but still love it. Limited articulation, but enough that it's not a problem. Very pleased with this figure.
続きを読む
レビュー を日本語に翻訳する

Cheryl D. Meisel
5つ星のうち5.0 Great figure!!!
2013年3月21日 - (Amazon.com)
Amazonで購入
Great look a like figure. I would have liked more articulation but for looks I don't think you could get any better. I personally think they should have added TWO heads to the figure, as it was pricey and somewhat greedy to have to buy tow figures that really are one figure. But if your a stickler for looking like the actual figure this one is hard to beat!!!
I recommend it.
続きを読む
1人のお客様がこれが役に立ったと考えています
レビュー を日本語に翻訳する