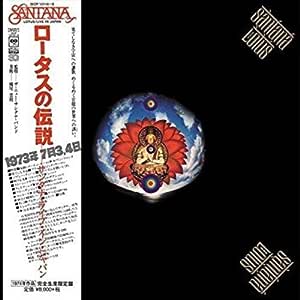 Andrew Zografos
5つ星のうち5.0 MFSL pressing is AWESOME
2019年5月14日にカナダでレビュー済み
Amazonで購入
Just to bring the reviews up. The previous one star review is quite atrocious. How can anyone give a one star review on on of the greatest live performances EVER!!! I have the original Japanese pressing of this album and this one is very close sonic wise to it if not equal to. Especially given the fact that it is brand new and plays without a crackle, pop, hiss or what have you - things that are inherent to vinyl.
I realize that the price $$ is quite expensive and I was lucky to get this very very cheap. If you're wondering about the music itself and are into the rock latin jazz fusion era of Santana then DO NOT hesitate, this album is absolutely incredible!!!
I would give it 10 stars if I could.
続きを読む
違反を報告
レビュー を日本語に翻訳する

Bob F.
5つ星のうち5.0 INCREDIBLE SOUND
2020年7月19日にカナダでレビュー済み
Amazonで購入
The packaging that comes with this is unbelievable but mostly Japanese. I got it used for half the price & it looks & sounds perfect. I paid $50 but wouldn't have paid over $100 for it. I got the 3cd set.
続きを読む
違反を報告
レビュー を日本語に翻訳する

It all comes in a see through plastic slip case. There's the gate-fold CD package itself, rather like Led Zeppelin's 'How The West Was Won' and the booklet seperate. The booklet is all in Japanese however! Some great pictures though.

The CD package is presented beautifully. Stunning art work abound, either end of the fold out pulls out completely and folds up and down to reveal even more mystical art. Each CD pulls out in a cardboard slip case, and inside this a plastic sleeve, just like a mini vinyl! All this is after you've folded out the package, and looked at all the various mini-posters/postcards that are in there, as well as what I assume to be a copy of the original gig ticket, and reciept, although it's all in Japanese, so I may be mistaken!

As for the music itself? Sublime. I doubt it varies much, if at all from the 2008 2 CD release that costs £11 or thereabouts. This 3 CD version does maintain the original 1973 track order though, but that's only a minor quibble about the regular CD release as long as everything is there.

To summerise, this expensive release is stellar. And there's the catch: expensive. £70 or whatever is alot to ask. If you're an avid fan or collector then yes it's worth it, cos the box set is very special, and so well presented. If you're just really rich and can afford it then go for it. For the average, just stick to the 2 CD version cos it's fine. This would make an amazing present though for someone who likes Santana but doesn't own this album in any form. Just look after it! It's a cracking album either way you cut it. One of the best live albums by anyone ever.

P. Mc Hugh
5つ星のうち4.0 An awesome presentation
2007年9月11日にアメリカ合衆国でレビュー済み
Amazonで購入
The Japanese mini LP versions of CDs has been an example of technology, craftmanship and an incredible eye to detail. Granted sometimes the printing on these releases requires a magnifying glass to read, but it is clear and legible. LP covers were an art form and many covers demanded the size of these covers to convey the art properly. Many of us who have the originals are probably not going to buy the mini LP. However, many of these discs now come with upgraded remastering and bonus tracks to entice us to buy them, anyway.

This release is the epitome of the mini LP product. With the package completely unfolded, this release is an incredible sight to see. This is one that you would buy, even if you have the original LP release. It is that good.

The attention to detail is also present in the CDs themselves. The sound is better than the domestic release and has been put back into the original 3 LP format. Now, this is good and bad. With three CDs, you are getting an exact replica. From an enjoyment point of view the domestic 2 CD release makes sense. Also, in the 3 CD format, Discs 2 & 3 have a fade in of the last few seconds that were on the prior CD, just like it was on the LPs. What may have been convention years ago is now an annoyance. The 2 CD version does away with this overlap.

So, if you have the domestic release, don't get rid of it. Use it for your listening enjoyment and have this release for the pure visual enjoyment.

5 out of 5 stars for the packaging.

4 out of 5 stars for superior sound, but annoying fading of the music between discs.
続きを読む
7人のお客様がこれが役に立ったと考えています
違反を報告
レビュー を日本語に翻訳する

C. Walker
5つ星のうち5.0 Treatment Worthy of the Album Itself
2011年11月29日にアメリカ合衆国でレビュー済み
Amazonで購入
First, this is probably the greatest live album to come out of Rock music. There is nothing I could say to add to the performance recorded herein except to say that I'm glad they finally made it available to Westerners.

The sound quality for every release of this album has always been astonishingly good, but I suspect this is as good as it gets on a standard CD. The package is a meticulously faithful replica of the original album (for the longest time available only as a Japanese import).

Now the CD package finally gets the treatment that the album itself deserves. It's almost embarrassing to see an album of such astronomical quality being tossed together into a double-thick jewel case. (Well, at least I haven't seen it stuffed into one of those masterpieces of planned obsolescence, the digi-pack!)

This three-CD format is better than the two-CD package in one very important respect. When I transfer my albums to my portable player, I like to keep uninterrupted live segments as a single file. With three CDs, this becomes easier to manage than with two CDs, although with both packages the engineers left several gaps in the middle of the sides, allowing us to divide the Japanese package into more than three files, whereas the two-CD package has blended many of these together in an attempt to simulate an uninterrupted concert experience.
続きを読む
2人のお客様がこれが役に立ったと考えています
違反を報告
レビュー を日本語に翻訳する
すべてのレビューを参照します
Amazonプライム会員ならお急ぎ便、日時指定便が使い放題
さらに、映画もTV番組も見放題。200万曲が聴き放題 。クラウドに好きなだけ写真も保存可能。
> プライムを無料で試す