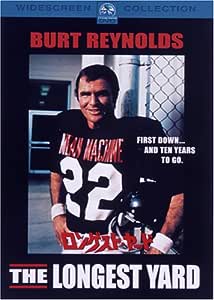 p manning
5つ星のうち5.0 It's Survival Of The Fiercest
2016年7月15日に英国でレビュー済み
Amazonで購入
In the years from 1973-1980 Burt Reynolds was always in the American box office top ten. In 1978 he was the most popular actor in America.
He was a footballer when young and played quarterback for Florida State University so his role here in Robert Aldrich's The Longest yard suits him perfectly.
This was the first of two films that Burt made with the director in the mid seventies the other being Hustle made in 1975. Both films were released by Paramount Pictures.
The Longest Yard was released in August 1974 and grossed 43 million dollars
Burt Reynolds plays Paul Crewe and the film opens in Palm Beach Florida where Burt is in an apartment with Melissa played by Anitra Ford.
They have a very physical argument and then a very drunk Burt storms out and steals her Maserati engine Citroen SM which he drives at breakneck speed around Palm Springs to the soundtrack of Saturday Night Special by Lynryd Skynrd. After a great car chase he is arrested and sent to prison. The prison sequences were filmed at Georgia State Prison Reidsville by permission of Jimmy Carter.
Burt is persuaded by the prison governor to put together a team of prisoners to take on the guards. The film climaxes with the football match which turns very physical.
This is a very macho movie very typical of director Robert Aldrich but lightened by Burt's humour.
続きを読む
2人のお客様がこれが役に立ったと考えています
違反を報告
レビュー を日本語に翻訳する

Braml_P
5つ星のうち5.0 Keen on Mean
2017年3月20日に英国でレビュー済み
Amazonで購入
The Longest Yard (or "The Mean Machine") is a classic (unlike all of its "re-makes"!) and it's one of Burt's best (well behind Deliverance, of course!!). He is at his most twinkling self in a tale of a disgraced American football star, sent to prison and asked, by a trophy obsessed warden, to coach his guards team to glory. Initially refusing and, therefore, being exposed to the wardens wrath, he changes his mind and organises a pre-trophy "warm-up" game for the guards, against a team of cons. The rest is history, but it is well worth watching, even if you're not an American football fan. Arguably, one of the best sports based movies, clichéd most certainly, but well worth the gate money!!!
続きを読む
1人のお客様がこれが役に立ったと考えています
違反を報告
レビュー を日本語に翻訳する

saint michael
5つ星のうち4.0 Saint Michael
2013年3月18日に英国でレビュー済み
Amazonで購入
During a browse for Dvd's i came across this old favourite from my youthful days. Firstly i could'nt believe the film title, i always thought it was "The Mean Machine!", secondly i wondered if it would have the same impact on me like it did all those years ago back in the 70's. After a relaxed viewing of the film, i can safely say it still retains it's entertainment value,wit and several good performances from the cast, including naturally the lead role played by Mr Reynolds.
The only reason it "fails" is the duration of nigh on 2 hours, maybe through more youthful eyes all those years ago my imagination was fired by the high octane images of the Mean Machine's joust with the prison guards!
Overall a fine film still holding it's own almost 40 years since it's release.
続きを読む
1人のお客様がこれが役に立ったと考えています
違反を報告
レビュー を日本語に翻訳する

barbara reed
5つ星のうち5.0 Burt at his best
2015年8月30日に英国でレビュー済み
Amazonで購入
have seen both Burt Reynolds and Adam Sandlers versions of this and its hard to say which is the best.This is still as great as when i saw it back when it first came out.The story is good ,there are very funny parts and sad parts but you can not fail to be behind the cons to win the match. Burt at his best.Glad I finally got it in my collection and it will be played a lot !
続きを読む
2人のお客様がこれが役に立ったと考えています
違反を報告
レビュー を日本語に翻訳する