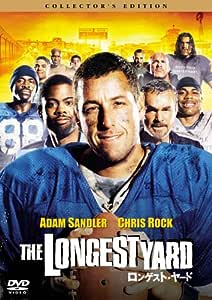 James Robert McGregor
5つ星のうち5.0 Wow it proves ex/present pro wrestlers can make good actors
2009年7月7日に英国でレビュー済み
Amazonで購入
well as re makes of classic films are usually bad (for example The Re-make of A Remake The Texas Chainsaw Massacre) And The Very Poorly made Remake The Next Generation )

this is one of the exception to that rule, the script is solid with a great story line

n this remake to the 1974 sports comedy of the same name, 'The Longest Yard' tells the story of pro quarterback Paul Crewe (Adam Sandler) and former college champion and coach Nate Scarboro (Burt Reynolds), who are both doing time in the same prison. Asked by the sadistic warden (James Cromwell) to put together a team of inmates to take on the guards, Crewe enlists the help of Scarboro to coach the inmates to victory in a football game "fixed" to turn out quite another way.